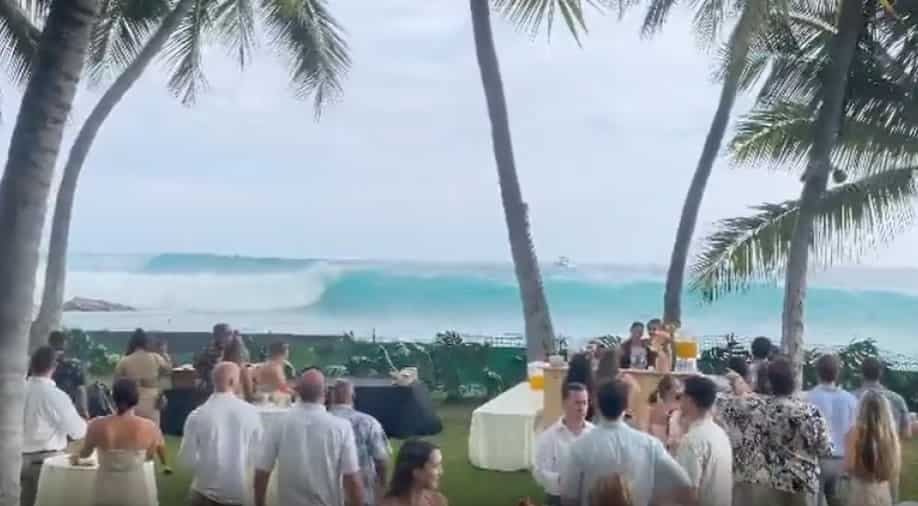 A happy, celebratory occasion for a wedding couple and the guests quickly turned sour in Hawaii after giant waves wrecked the venue. Reportedly, couple Dillon and Riley Murphy had planned their big day at the Hulihe’e Palace in Kailua-Kona on the west coast of Hawaii’s Big Island on Saturday (July 17). However, nature had other plans for them.

A video clip of the wedding that has since gone viral on the realms of social media shows the guests and the couple bracing for the impact of the big wave. After a wait of a few seconds which appeared to stretch forever, a giant wave hit the boundary wall and splashed inside the venue. The bar, dining table and some other furniture was quickly destroyed.

Luckily, unlike the accident in Oman a few days back where eight Indians were dragged by the powerful currents, the guests at the venue kept a safe distance from the raging waters.

However, the couple was lucky as their wedding cake was saved and no food was destroyed. “And we were kind of right at the moment where we were going to start moving a couple things and, yeah, this big wall basically just showed up. And luckily there was no food in any of the containers, the cake luckily made it.” the local media quoted Riley as saying.

Riley also remarked that after a little cleanup and drying off the venue, the ceremony was back on. Though the couple didn’t have their dreamy wedding, they still managed to make the most of the conditions, which included dance in the mud, as the dance floor was swept off by the waves. “The show still went on and it was, it was a really, really fun night,” Riley said.