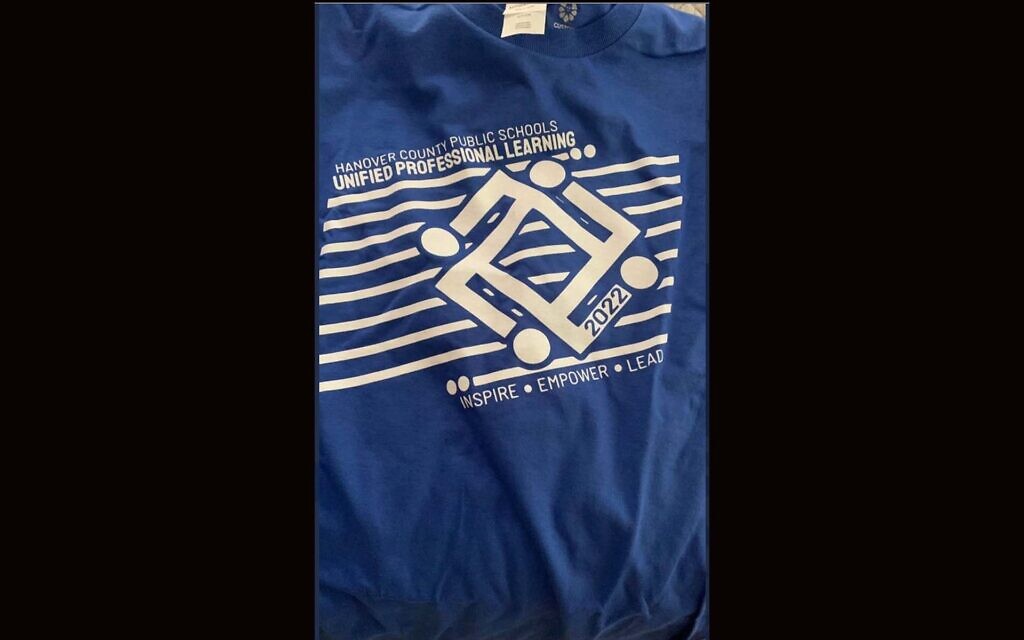 JTA – A school district in Virginia has apologized for designing and distributing a logo that resembles a swastika, in the second case this month of a district releasing a logo that bears a resemblance to a Nazi emblem.

Hanover County Public Schools, just north of Richmond, this week unveiled T-shirts and conference materials with a logo of what the superintendent said was “four hands and arms grasping together.” But local Jewish groups and others, including a Jewish candidate for Virginia’s House of Delegates, instead saw something that looked too much like the swastika.

“We are deeply sorry for this mistake and for the emotions that the logo has evoked by its semblance to a swastika and, by extension, to the atrocities that were committed under its banner,” Michael Gill, the district’s superintendent, said in a statement Wednesday, in which he blamed the logo’s creation on “one of our teachers” who said it had been done “without any ill-intent.”

“Unquestionably, we condemn anything associated with the Nazi regime in the strongest manner possible,” Gill wrote.

Gill’s apology came after objections to the logo were raised by the Jewish Community Federation of Richmond, the Anti-Defamation League, the Virginia Holocaust Museum, the interfaith nonprofit Virginia Center for Inclusive Communities and other civil rights groups, including the local NAACP chapter.

“We appreciate the swift and definitive response of Superintendent Michael Gill,” the federation’s CEO, Daniel Staffenberg, said in a statement. Staffenberg added that the groups planned to meet with Gill to “ensure that the voice of Jewish students and those of other minority faiths are heard and respected.”

The incident came less than a month after a school district near Atlanta apologized for designing a new elementary school logo that resembled the Nazi Eagle. That school, East Side Elementary in Marietta, Georgia, is located across the street from a synagogue.

Rachel Levy, a former Jewish preschool teacher running for the Virginia House of Delegates in a district that includes part of Hanover County, harshly criticized the school district on Twitter for the logo, and said Gill’s apology was “unacceptable.”

“This is what happens when you refuse to acknowledge that cultural competence & sensitivity are a thing. And that your leadership lacks it,” wrote Levy, a Democrat. “Sadly, stuff like this happens way too frequently with HCPS.”

Levy pointed to another recent incident in the district in which a school board member attempted to prosthelytize a Jewish teacher, saying that “your eternal destiny depends on” converting to Christianity, and disparaged the head of the local NAACP as “an angry African-American lady.”

The swastika was originally a symbol of peace used by Hindu, Buddhist and Jain communities, but after being adopted by the Nazi regime, it is popularly understood to have morphed into a symbol of hate. A Hindu movement in California is seeking to expand understanding of non-hateful uses of the symbol.