The Biden administration called for “a thorough and immediate investigation” into the death of a 7-year-old Palestinian who lost his life in disputed circumstances during an Israeli army operation in the southern West Bank on Thursday.

“The US is heartbroken to learn of the death of an innocent Palestinian child,” US State Department Deputy Spokesman Vedant Patel said when asked about the incident during a press briefing. “We support a thorough and immediate investigation into the circumstances surrounding the child’s death, and I believe the IDF itself has also indicated it will be looking into what has transpired as well.”

The Palestinian Authority Health Ministry claimed Rayan Suleiman fell from an unspecified height after being chased by soldiers near the Palestinian town of Tuqu’, south of Bethlehem.

Earlier in the day, young Palestinian village boys were seen throwing stones at cars driving on a highway near the neighboring Israeli settlement of Tekoa. Later, relatives said that soldiers banged on the door and wanted to arrest Rian’s older brothers for alleged stone throwing.

Mohammed Suleiman, a 22-year-old cousin, said Rayan was shrieking in fear at the sight of the soldiers and his parents shouted, “come here,” to calm him down. He said after the soldiers left, the boy collapsed. He said Rayan had been healthy.

The boy’s father, Yasser Suleiman, said Rayan tried to run away when the soldiers said they wanted to arrest his brothers and was briefly chased by the soldiers. He said Rayan was vomiting blood in the car after collapsing and was pronounced dead at the hospital. “He was martyred from the fear of them,” the father told Palestine TV. 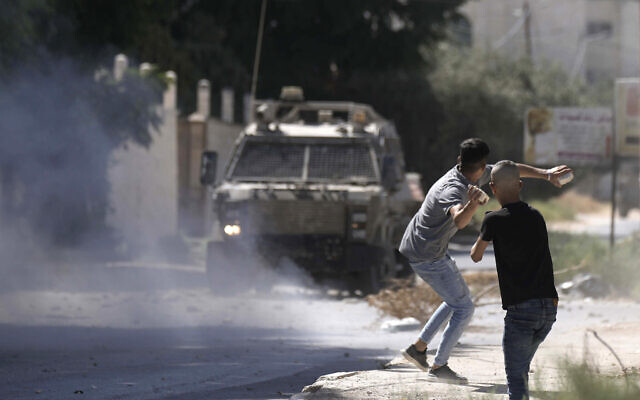 A Palestinian throws rocks at an Israeli military vehicle following a deadly operation in the West Bank city of Jenin on Sept. 28, 2022. (AP/Majdi Mohammed)

Lt. Col. Richard Hecht, a military spokesman, said a senior officer on the scene went to the house after spotting one of the stone throwers on a balcony and told the father to make the children stop throwing stones at motorists. He said the officer spoke in a “very calm manner” and left.

“There was no violence, no entry into the house,” Hecht said, adding that there was an ongoing IDF investigation into the matter.

Palestinians and human rights groups claim the Israeli army is incapable of investigating wrongdoing by its forces and that soldiers are rarely held accountable.

Palestinian social media was awash with photos of Rayan superimposed over the golden Dome of the Rock in Jerusalem, with Palestinians declaring him a “martyr” and condemning Israel for his death. The official Palestinian news agency Wafa headlined its report “the death of a child while being chased,” in effect blaming Israel for the death.

The boy was scheduled to be buried on Friday, when Palestinian demonstrators often clash with Israeli soldiers.

The funeral comes at a time of rising violence in the West Bank.

On Wednesday, four Palestinians were killed and 44 wounded during an Israeli military raid in the northern West Bank town of Jenin. IDF Chief of Staff Aviv Kohavi said the operation was successful in neutralizing a concrete terror threat. It was also the deadliest episode since Israel launched its crackdown earlier this year in response to a wave of Palestinian terror attacks that killed 19 people in Israel and the West Bank.

Most of the dead have been wanted militants who opened fire, or youths who threw firebombs or stones at soldiers entering their neighborhoods. But several civilians who were not involved in any violence have also died.

Biden officials voiced their concern regarding the deteriorating security situation in the West Bank on three separate occasions; Wednesday at the State Department, the United Nations, and the White House. 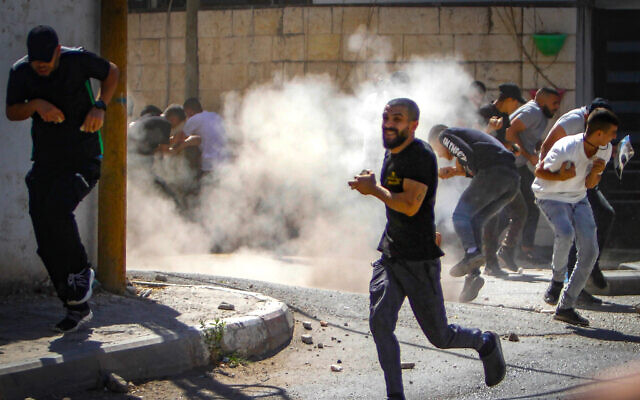 “We are troubled by the overall trend of growing violence,” she said while panning unilateral actions taken by both parties that have exasperated tensions.

“This includes terrorist attacks and incitement to violence against Israelis. This includes plans to develop Har Gilo west, which would further fragment the West Bank – and possible demolitions in Masafer Yatta. And this includes violence inflicted by Israeli settlers on Palestinians in their neighborhoods, and in some cases escorted by Israeli security forces,” she said.

Emanuel Fabian contributed to this report