TOKYO — There were “undeniable” flaws in security for Japanese former prime minister Shinzo Abe, the head of police in the area where the leader was assassinated admitted on Saturday, pledging an investigation.

Japan’s best-known politician was on the campaign trail in the western region of Nara when a gunman opened fire at close range.

Security at local campaign events in Japan can be relatively relaxed, in a country with little violent crime and strict gun laws.

But given Abe’s profile, questions have been raised about whether measures to protect him were too lax.

“I believe it is undeniable that there were problems with the guarding and safety measures for former prime minister Abe,” Tomoaki Onizuka, head of the Nara prefectural police, told reporters on Saturday.

“The urgent matter is for us to conduct a thorough investigation to clarify what happened,” he said. 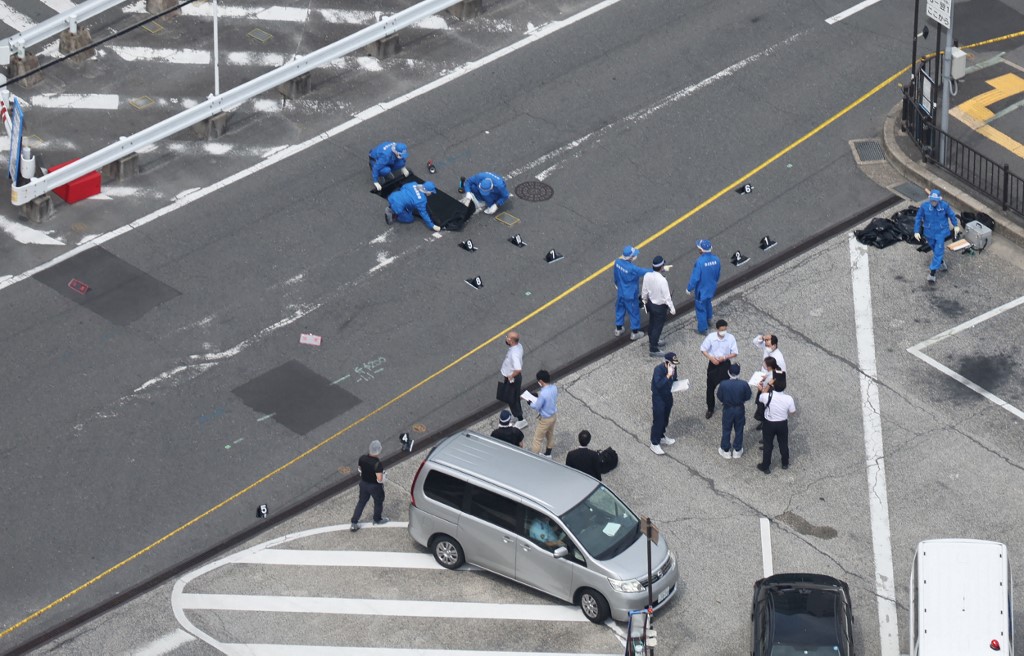 He did not offer any immediate details on specific shortcomings to the security plan, but said he felt a heavy sense of responsibility.

“As the regional police chief responsible for safety and security of the region, I took necessary steps and built structures for security and guarding,” he said.

“In all the years since I became a police officer in 1995, in my career that stretches more than 27 years, there is no greater remorse, no bigger regret than this,” he said of Abe’s death, his voice shaking with emotion.

The video of #ShinzoAbe assassination. First bullet missed him, second hit him near the neck as he turned noticing the loud noise which led to a hole in the heart. While he had personal security guards all around, overall security seems to be problematic.pic.twitter.com/ewOExQKwBv

Some observers who watched videos of the assassination on social media and television noted a lack of attention in the open space behind Abe as he spoke. 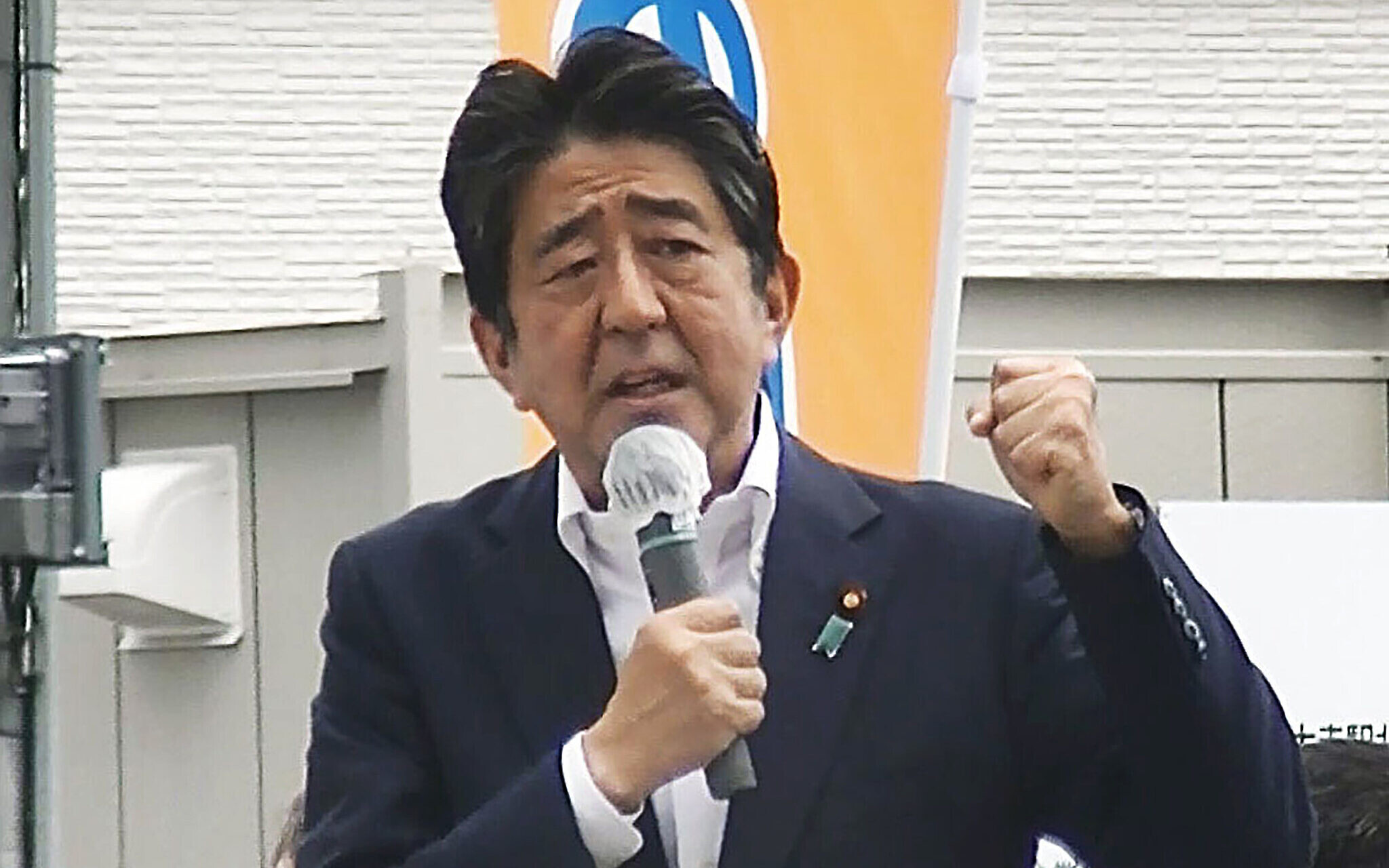 In this image from a video, Japan’s former Prime Minister Shinzo Abe makes a campaign speech in Nara, western Japan shortly before he was shot, July 8, 2022. (Kyodo News via AP)

A former Kyoto prefectural police investigator, Fumikazu Higuchi, said the footage suggested security was sparse at the event and insufficient for a former prime minister when he was attacked by Tetsuya Yamagami.

“It is necessary to investigate why security allowed Yamagami to freely move and go behind Mr. Abe,” Higuchi told a Nippon TV talk show.

Experts also said Abe was more vulnerable standing on the ground level, instead of atop a campaign vehicle, which reportedly could not be arranged because his visit to Nara was hastily planned the day before.

In videos circulating on social media, 41-year-old Yamagami, can be seen with the homemade gun hanging from his shoulder, standing only a few meters behind Abe across a busy street, and continuously glancing around.

A few minutes after Abe stood at the podium and started his speech — as a local party candidate and their supporters stood and waved to the crowd — Yamagami can be seen firing the first shot, which issued a cloud of smoke, but the projectile apparently missed Abe.

As Abe turned to see where the noise came from, a second shot went off. That shot apparently hit Abe’s left arm, missing a bulletproof briefcase raised by a security guard who stood behind the former leader. 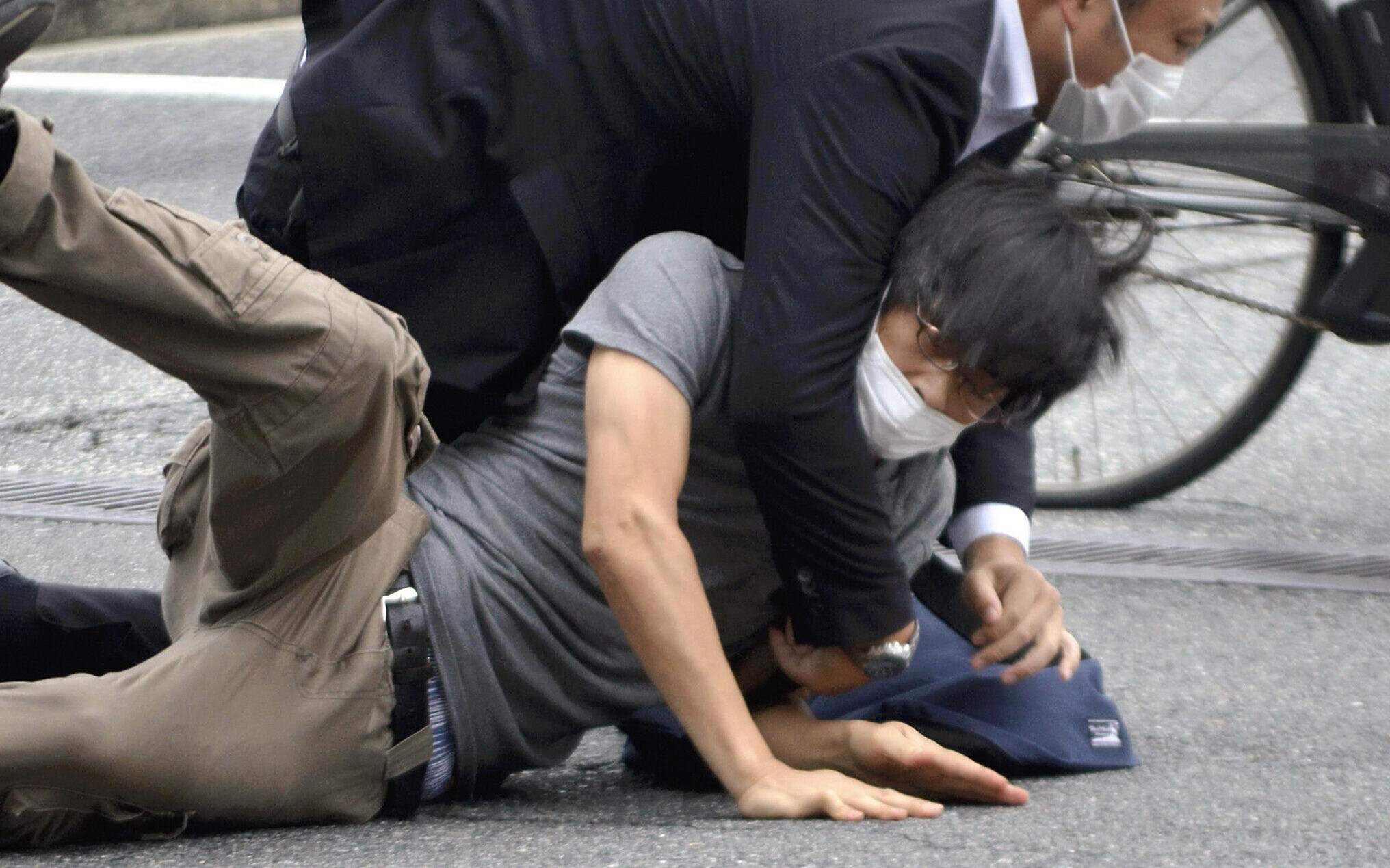 Abe fell to the ground, with his left arm tucked in as if to cover his chest. Campaign organizers shouted through loudspeakers asking for medical experts to provide first-aid to Abe, whose heart and breathing had stopped by the time he was airlifted to a hospital where he later pronounced dead.

According to the Asahi newspaper, Yamagami was a contract worker at a warehouse in Kyoto where he was a forklift operator and known as a quiet person who did not mingle with his colleagues. A next-door neighbor at his apartment told Asahi he never met Yamagami, though he recalled hearing noises like a saw being used several times late at night over the past month.

Yamagami, told investigators he plotted the shooting because he believed rumors that Abe was connected to an organization that he resents, according to police. Japanese media reported that the man had developed hatred toward a religious group his mother was devoted to. The reports did not specify the group. 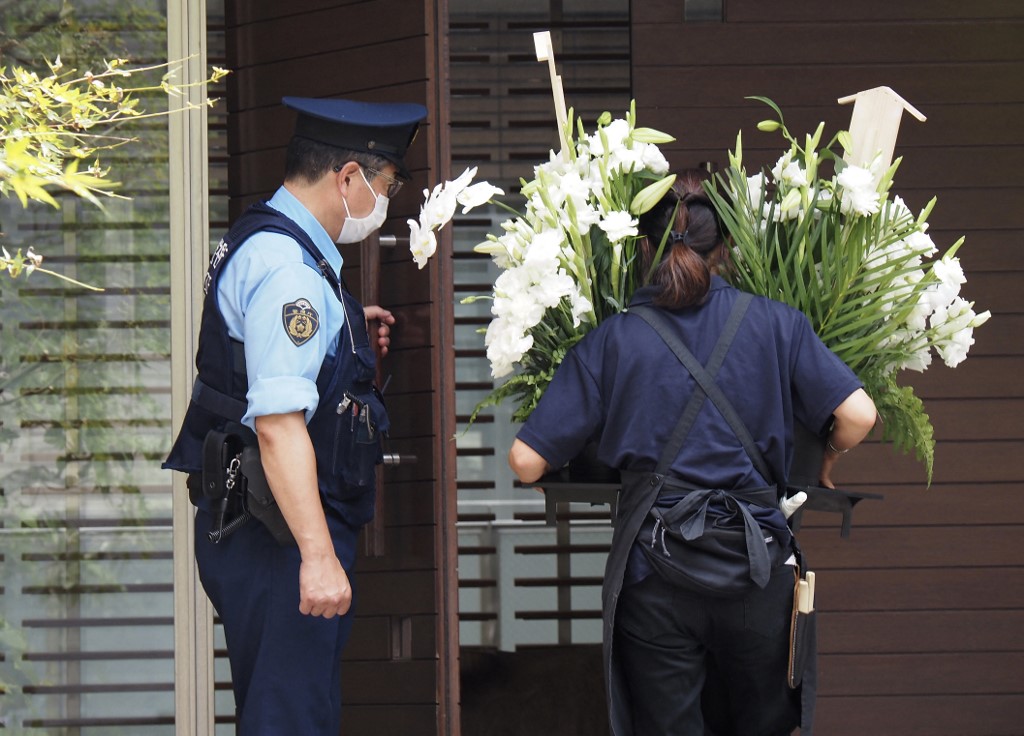 A florist is helped by a police officer while carrying flowers at the residence of late-premier Shinzo Abe in Tokyo on July on July 9, 2022 (Toshifumi Kitamura/AFP)

A black hearse carrying Abe’s body and accompanied by his wife, Akie, arrived at his home in Tokyo’s upscale residential area of Shibuya, where many mourners waited and lowered their heads as the vehicle passed.

Abe’s assassination ahead of Sunday’s parliamentary election shocked the nation and raised questions over whether security for the former prime minister was adequate.