AFP — Ukraine on Sunday vowed to fight to the end in Mariupol after a Russian ultimatum expired for remaining forces to surrender in the besieged Black Sea port city where Moscow is pushing for a major strategic victory.

“The city still has not fallen,” Ukrainian Prime Minister Denys Shmyhal said hours after Moscow’s deadline had passed for fighters holed up and surrounded in a sprawling fortress-like steelworks to surrender.

“There’s still our military forces, our soldiers. So they will fight to the end,” he told ABC’s “This Week.”

Moscow has shifted its military focus to gaining control of the eastern Donbas region and forging a land corridor to already-annexed Crimea.

Russia’s defense ministry said there were up to 400 mercenaries inside the encircled Azovstal steel plant, without providing evidence, and called on Ukrainian forces inside to “lay down their arms and surrender in order to save their lives.”

Moscow claims Kyiv has ordered fighters of the nationalist Azov battalion to “shoot on the spot” anyone wanting to surrender.

Russian President Vladimir Putin has already said the talks are at a “dead end.”

Shmyhal said Ukraine wanted a diplomatic solution but would fight to the end if necessary.

“We will not surrender,” he said.

While several large cities are under siege, he said, not one — with the exception of Kherson in the south — had fallen, and more than 900 towns and cities had been liberated.

As Russia scales up attacks on Ukraine’s eastern flank, at least five people were killed and 20 wounded in a series of strikes in second city Kharkiv, just 21 kilometers (13 miles) from the Russian border. 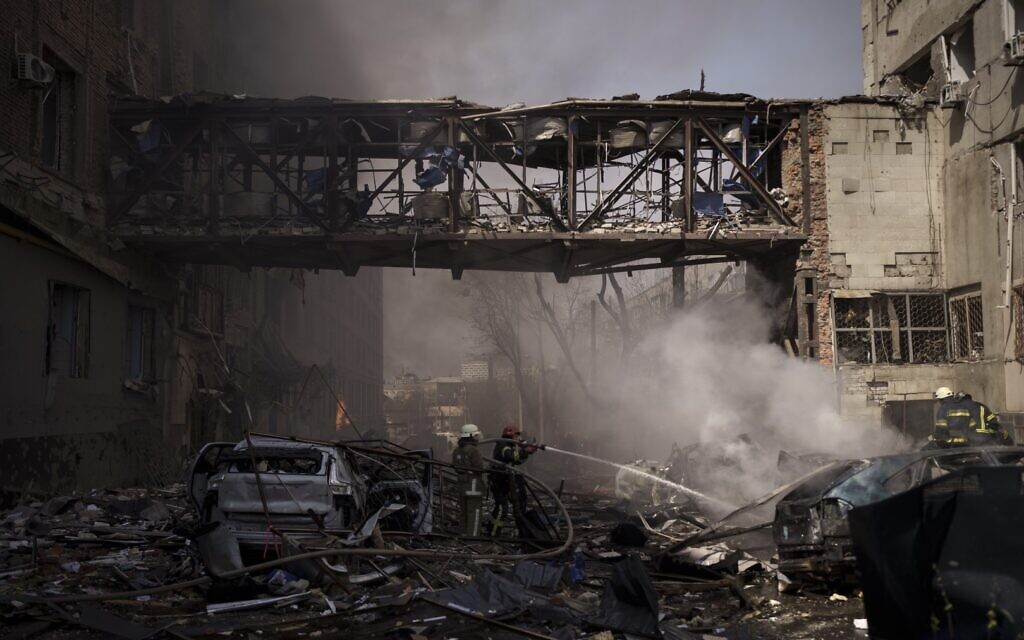 In addition, two people died and four were wounded in attacks on the towns of Marinka and Novopol, west of Donetsk, regional governor Pavlo Kyrylenko said on Telegram; and an air strike hit an armaments factory in the capital Kyiv.

Maksym Khaustov, the head of the Kharkiv region’s health department, confirmed the deaths there following a series of strikes that AFP journalists on the scene said had ignited fires throughout the city and torn roofs from buildings.

“The whole home rumbled and trembled,” 71-year-old Svitlana Pelelygina told AFP as she surveyed her wrecked apartment. “Everything here began to burn.”

“I called the firefighters. They said, ‘We are on our way but we were also being shelled.’” 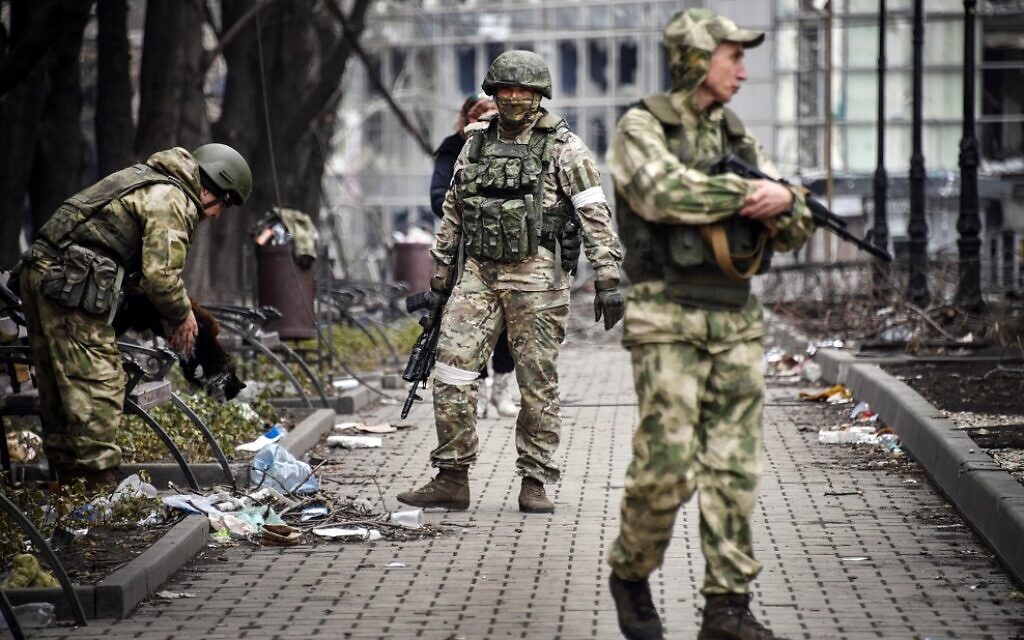 Russian soldiers walk along a street in Mariupol on April 12, 2022, as Russian troops intensify a campaign to take the strategic port city. (Alexander Nemenov/AFP)

“Once again, we demand the opening of a humanitarian corridor for the evacuation of civilians, especially women and children, from Mariupol,” Vereshchuk said.

Zelensky, describing the situation there as “inhuman,” called on the West to immediately provide heavy weapons.

Mariupol has become a symbol of Ukraine’s unexpectedly fierce resistance since Russian troops invaded the former Soviet state on February 24.

The UN World Food Program says that more than 100,000 civilians there are on the verge of famine, and lack water and heating.

Ukrainian officials said the city was on the verge of a humanitarian catastrophe. 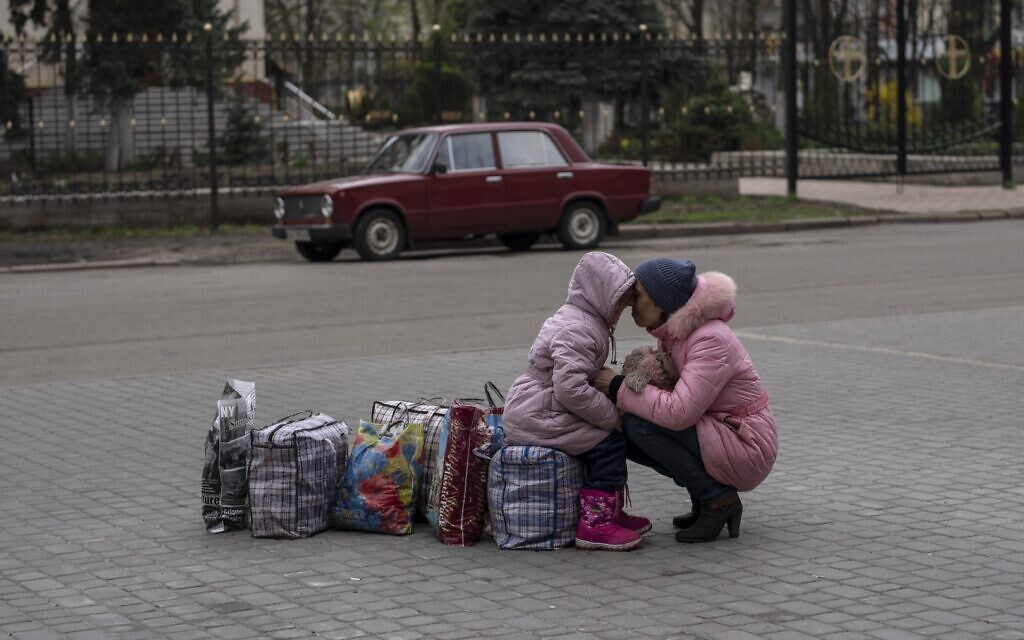 A mother hugs her daughter as they wait for a bus to flee from Sloviansk city, in Donetsk district, to travel to Rivne , western Ukraine, on April 16, 2022. (AP Photo/Petros Giannakouris)

They were compiling evidence of alleged Russian atrocities there, said Minister of Digital Transformation Mykhailo Fedorov. “We will hand everything over to The Hague. There will be no impunity.”

The mayor of Bucha, a town near Kyiv where the discovery of dead civilians sparked international condemnation and war crimes accusations, said Russian troops had raped men as well as women and children there.

Ukrainian authorities have urged people in the eastern Donbas area to move west to escape a large-scale Russian offensive to capture its composite regions, Donetsk and Lugansk.

“Russian troops are preparing for an offensive operation in the east of our country in the near future. They want to literally finish off and destroy Donbas,” Zelensky said in an evening statement.

Deputy Prime Minister Vereshchuk said humanitarian corridors allowing civilians to flee would not open on Sunday after a failure to agree to terms with Russian forces.

But Lugansk governor Gaiday said he had nevertheless proceeded with evacuations. “At our own peril and risk, we took out several dozen people anyway, but it’s already dangerous,” he told Ukrainian media. 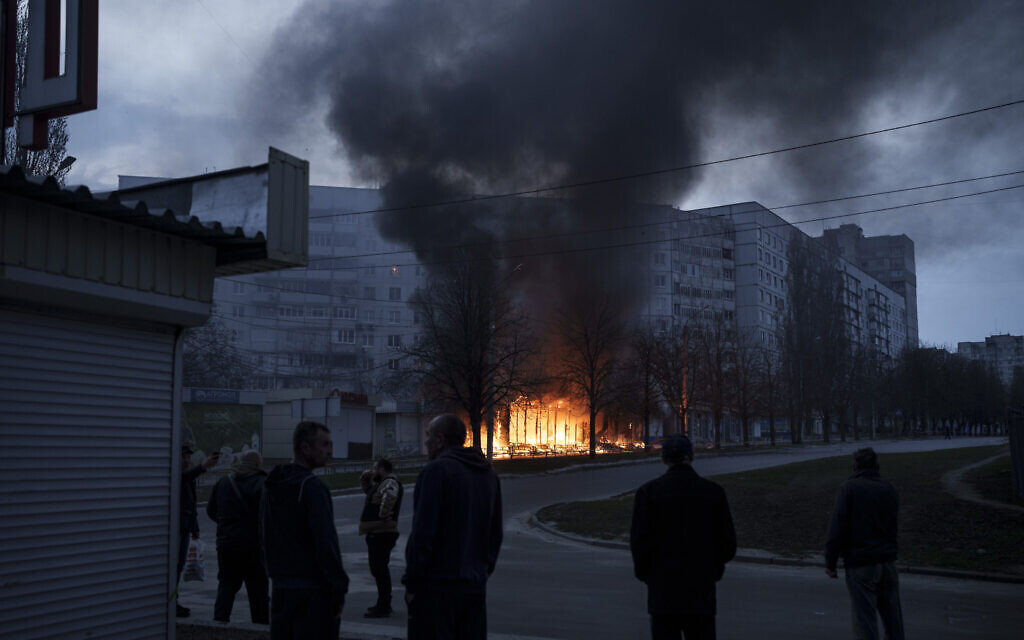 Residents stand outside their apartments as shops burn after a Russian attack in Kharkiv, Ukraine, Monday, April 11, 2022. (AP Photo/Felipe Dana)

“May there be peace for war-torn Ukraine, so sorely tried by the violence and destruction of the cruel and senseless war into which it was dragged,” said Pope Francis as he celebrated Easter Sunday at the Vatican.

Zelensky said he had invited his French counterpart to visit Ukraine to see for himself evidence that Russian forces have committed “genocide,” a term President Emmanuel Macron has avoided.

“I talked to him yesterday,” Zelensky told CNN in an interview recorded on Friday but broadcast Sunday.

“I just told him I want him to understand that this is not war, but nothing other than genocide. I invited him to come when he will have the opportunity. He’ll come and see, and I’m sure he will understand,” Zelensky said.

Russia warned the United States this week of “unpredictable consequences” if it sent its “most sensitive” weapons systems to Ukraine, as Zelensky has requested.

Russia’s defense ministry claimed Saturday to have shot down a Ukrainian transport plane in the Odesa region that was carrying weapons supplied by Western nations.

Russian air defense systems shot down two Ukrainian MiG-29 aircraft in the Kharkiv region and a drone near the city of Pavlograd, he added.