The news of the bust came weeks after Israel ordered its citizens in Istanbul to leave immediately, warning of an imminent Iranian attack plot targeting Israelis in Turkey.

Among those who were being targeted for kidnapping were a former Israeli diplomat and his wife, Hebrew media reported, citing Turkish outlets. The diplomat’s name was not published.

Israel’s Mossad spy agency chartered a private plane to immediately bring the pair and others back to the country, reports said.

The suspects, who were not all Iranian nationals, were detained in a raid last week in three houses in Istanbul’s popular Beyoglu district, the IHA news agency reported. The outlet said eight people had been arrested. 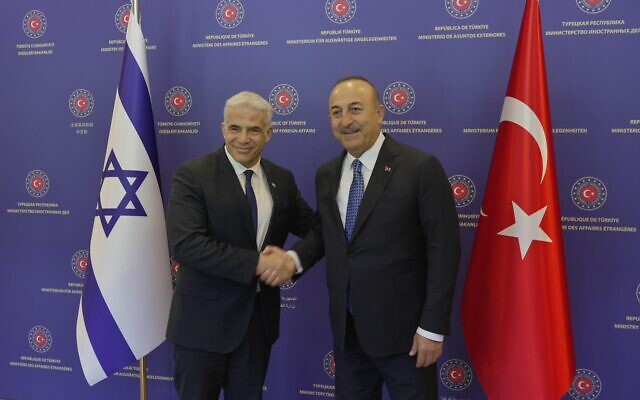 Reports of the detentions came as Israel’s Foreign Minister Yair Lapid arrived in Turkey Thursday for high-level talks, amid a recent rapprochement between the countries after years of frayed ties.

The terror warnings had both strained ties as Ankara chafed at being portrayed as an unsafe tourism destination in international media reports, but also allowed the two countries to showcase newly revived ties by cooperating on intelligence and security.

Iran and Israel have been engaged in a years-long shadow war but tensions have ratcheted up following a string of high-profile incidents Tehran has blamed on Israel.

The Islamic republic claimed Israel was responsible for the killing of Revolutionary Guards Colonel Hassan Sayyad Khodaei in his Tehran home on May 22. 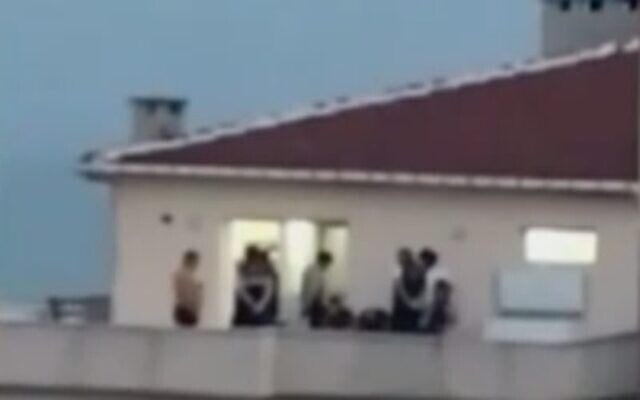 A building in Istanbul where members of an alleged Iranian terror cell targeting Israelis were arrested in mid-June (Channel 12 screenshot; used in accordance with clause 27a of the Copyright Law)

Khodaei’s assassination was the most high-profile killing inside Iran since the November 2020 killing of top nuclear scientist Mohsen Fakhrizadeh.

IHA said Iran sent agents disguised as businessmen, tourists and students to Istanbul to assassinate Israelis in retaliation for Khodaei’s murder and other attacks.

It said the Iranians had split into four groups of two assassins who could better track their Israeli targets.

The suspects rented apartments and hotel rooms in the area, and had $30,000 to set up a network of agents. 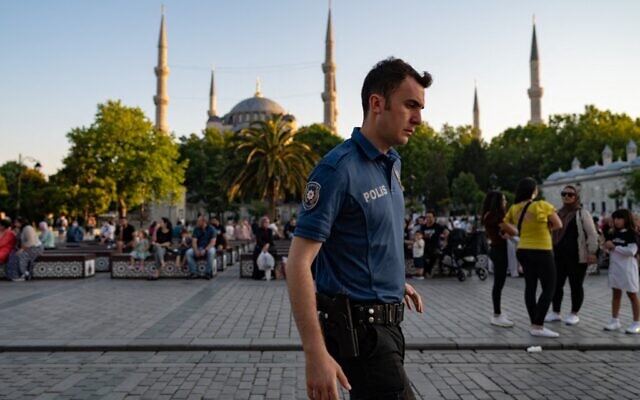 A Turkish police officer walks in front of the Blue Mosque in Istanbul, on June 14, 2022. (Yasin Akgul/AFP)

Police seized two pistols and two silencers in searches conducted in houses and hotels where the suspects were staying, according to the Hurriyet report.

“The hitmen in the assassination team, who settled in two separate rooms on the second and fourth floors of a hotel in Beyoglu, were [detained] with a large number of weapons and ammunition,” IHA said.

Later Thursday, Iran’s elite Islamic Revolutionary Guards Corps, which also handles operations outside of the country, announced that it was replacing the head of its intelligence unit Hossein Taeb, who had held the position for over a decade.

Taeb has been repeatedly named in Hebrew media reports as the man behind the planned attacks on Israelis in Turkey. 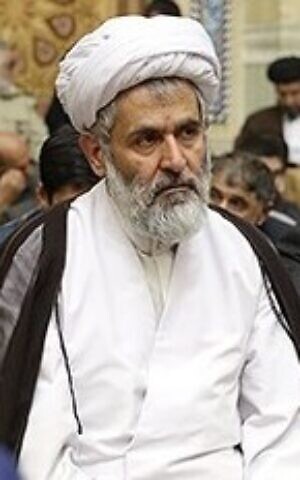 The reported arrests were the first time that Turkish media have reported on the subject of Iranian attacks that have been making headlines in Israel for over two weeks amid warnings from officials of Iranian cells on the loose in Turkey.

A report last week claimed that several Israelis visiting Istanbul were whisked out of Turkey the week before by Israeli security officials, who were acting on intelligence showing that the visitors were at immediate risk from Iranian assassins.

Media reports that Israeli and Turkish intelligence were cooperating in rounding up a network of Iranian operatives and that several attacks were foiled, were confirmed Monday by Prime Minister Naftali Bennett.

Bennett said that Israeli and Turkish security officials have worked together to foil attacks on Israelis in Turkey.

“In recent days, in a joint Israeli-Turkish effort, we thwarted a number of attacks and a number of terrorists were arrested on Turkish soil,” Bennett said.

The prime minister did not include details on the number of attacks, how many individuals were arrested, or the nationality of the terrorists.

Israel had issued a series of repeated harsh warnings to Israeli travelers in recent weeks to avoid visiting Turkey.

There are currently believed to be some 2,000 Israelis in Turkey. On Sunday, Channel 12 reported that fewer Israelis were heading to the country, without providing updated figures or sources.

Israeli media reports have said the Iranians have been planning attacks for months, apparently in revenge for the slayings of senior officers and others blamed on Israel.