BERLIN — Almost 40 people were injured, several seriously, on Friday in a “tornado” that hit the western German city of Paderborn, the police and fire brigade said.

A police spokesman said the tornado also caused significant damage in the city in the North Rhine-Westphalia state, following abnormally high temperatures for the time of year.

The city’s fire department said on Twitter that “38 injured people, including some gravely” had been taken to hospital.

The police said one person was fighting for their life.

In neighboring Rhineland-Palatinate state, a 38-year-old man died after he was electrocuted when he entered his flooded basement and fell on his head, the police in the city of Koblenz said.

Railway travel was disrupted in the west of the country, as police called on people to remain indoors.

#Germany????????- Tornado swept through #Paderborn at high speeds of 80mph, with city police saying more than 40 people have been injured pic.twitter.com/B4QfQxefAw

In Paderborn, police estimated the damage caused by the tornado at “several million” euros.

The spokesman reported “roofs torn off, windows shattered and numerous trees uprooted throughout the city.”

Other pictures from the wider region showed cars that had been upturned. 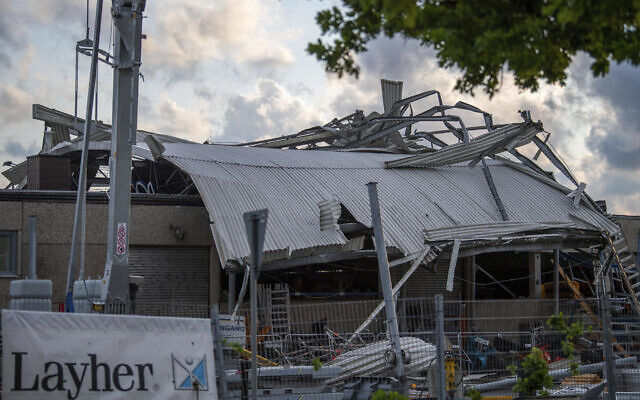 The roof of a construction machinery dealer lies across the building from severe weather in Paderborn, Germany, May 20, 2022. (Lino Mirgeler/dpa via AP)

The town of Lippstadt, about 30 kilometers away (18 miles), was also probably hit by a tornado, a fire department spokesperson said, though no injuries had been recorded.

The steeple of the church in Lippstadt had been destroyed by the high winds, according to photos published on social networks.

German meteorological services had put out a storm warning for Friday and predicted gales of up to 130 km/h (80 miles/h) in some places.

The bad weather first hit the west of the country and was set to travel eastwards.