PARIS, France — Thousands of people marched in Paris on Sunday to show their support for Iranian protesters standing up to their leadership over the death of a young woman in police custody.

Several female demonstrators chopped off chunks of their hair and tossed them into the air as a gesture of liberation.

Women of Iranian heritage, French feminist groups and leading politicians were among those who joined the gathering at Republique Plaza before marching through eastern Paris, the latest in a series of demonstrations held around the world against the regime in Tehran.

“Woman, Life, Liberty!” the crowd chanted, undeterred by the rainy weather. Some banners read: “Freedom for Iranian women,” or “No to Obligatory Hijab” or just the young woman’s name: “#Mahsa Amini.”

Others called “death to the Islamic republic!” “death to the dictator,” or held aloft signs reading “Join the first feminist revolution!” and “Mahsa Amini — your name has made the tyranny of the ayatollahs shake!”

The march appeared to be the largest of several protests in France in support of the Iranian demonstrators held in recent weeks,  with demonstrations also taking place in Lebanon, Turkey and elsewhere. 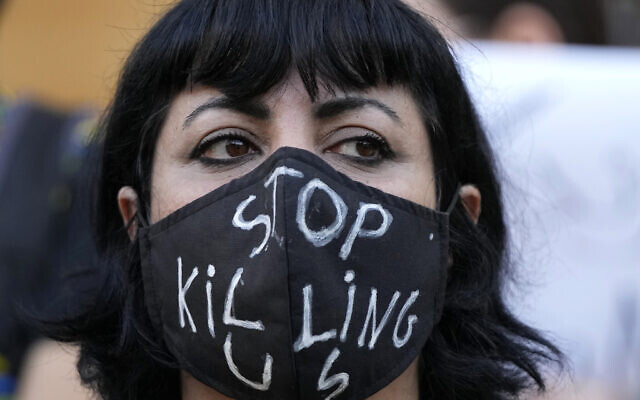 An activist wears a message on her protective face mask “Stop Killing Us” during a protest against the death of Iranian Mahsa Amini in Iran, in Beirut, Lebanon, Sunday, Oct. 2, 2022.(AP/Hassan Ammar)

In Bern, Swiss police used rubber bullets to disperse protesters who tried to scale the walls of the Iranian embassy Saturday, and in the US capital of Washington, hundreds of members of the Kurdish community gathered outside the White House gates, some bearing placards calling for regime change in Tehran.

Thousands of Iranians have taken to the streets over the last two weeks to protest the death of Amini, a 22-year-old woman who had been detained by Iran’s morality police in the capital of Tehran for allegedly not adhering to Iran’s strict Islamic dress code.

The protesters have vented their anger over the treatment of women and wider repression in the Islamic Republic, and the demonstrations escalated into calls for the overthrow of the clerical establishment that has ruled Iran since 1979.

The demonstrations have persisted in Iran despite a crackdown that has left 92 dead, according to the Iran Human Rights (IHR) group, and severe cuts to the internet aimed at squelching footage of the demonstrations from being spread online. 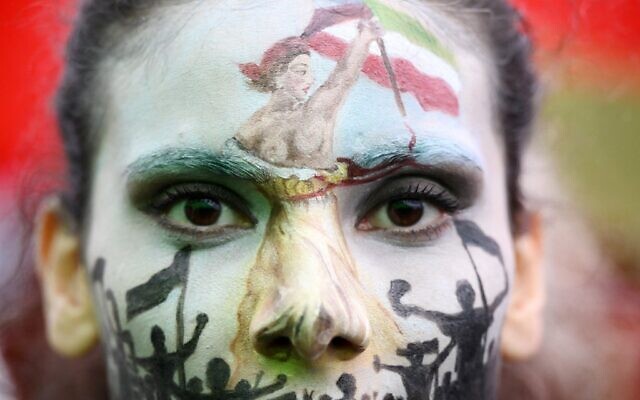 At the Paris protest, some chanted in Persian and French, “Khomenei get out!” — referring to Iran’s supreme leader Ayatollah Khomenei. Some women’s cheeks bore drawings of a red poppy, the symbol of a martyr in Iran.

Iris Farkhondeh, a 40-year-old French scholar who came to France as a refugee when she was a toddler, said she worries about rising Islamist extremism and the risk of terrorist attacks in France by religious extremists.

“The battle we fight in Iran is the same as that in France,” she said.

Other protesters described anger at Iran’s dress codes and encroaching restrictions on women. Some were afraid to give their names out of concerns for repercussions for family members in Iran. 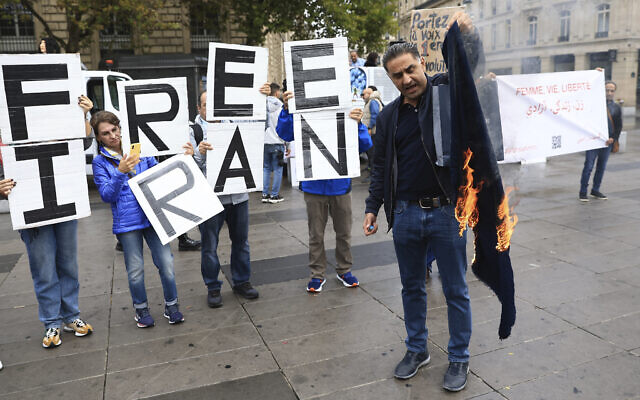 A man burns a scarf during a demonstration in a show of support to Iranian women, Sunday, October 2, 2022 in Paris. (AP/Aurelien Morissard)

Romane Ranjbaran, 28, came to protest with her mother and other family members.

“Iran is part and parcel of my history. My mom knew free Iran, when women were free,” she said.

She said she was happy to see so many people at Sunday’s gathering.

The march came a week after French police used tear gas and employed anti-riot tactics against demonstrators who attempted to march toward the Iranian embassy.

Several rallies have seen clashes between demonstrators and local police as angry protesters have attempted to storm or vandalize Iranian missions. 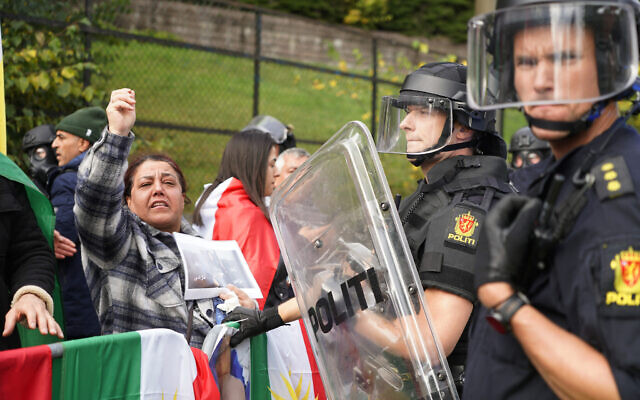 Policemen stand guard as demonstrators gather outside Iran’s embassy in Oslo, Norway, Thursday, Sept. 29, 2022, to protest the death of 22-year-old Mahsa Amini in custody in Iran after she was detained by the country’s morality police. (Terje Pedersen/NTB Scanpix via AP)

In Bern, police dispersed a “large crowd” of protesters after two men climbed over the embassy’s fence and pulled down the Iranian flag from a flagpole in the yard Saturday.

Police said they used rubber bullets after several other protesters at the unauthorized demonstration tried following the two men who had first entered the embassy’s yard and also attempted to access the premises.

Nobody was injured and the two were detained.

The groundswell of popular unrest began after Amini, a 22-year-old Iranian Kurd arrested by the morality police for infringing Iran’s strict dress code for women, was declared dead in custody on September 16. 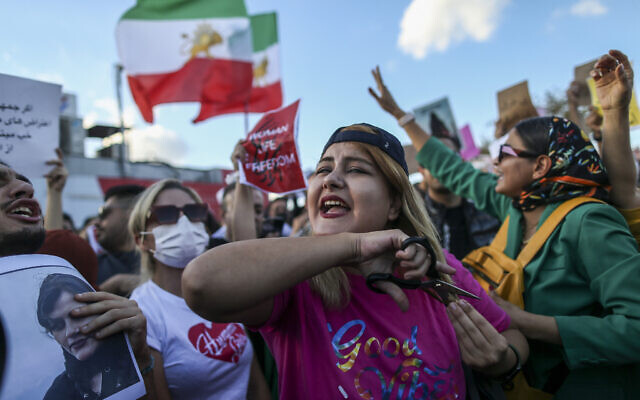 A woman cuts her hair during a protest against the death of Iranian Mahsa Amini, in Istanbul, Turkey, Sunday, Oct. 2, 2022. (AP/Emrah Gurel)

Iranian President Ebrahim Raisi on Sunday again accused Iran’s “enemies” of “conspiring” against the state and said their attempts had “failed,” as the country’s largest anti-government protests since 2019 showed no signs of abating.

‘The least we can do’

In France, protesters voiced anger that French President Emmanuel Macron had met Raisi in New York on the sidelines of the UN General Assembly shortly after the death of Amini.

“The French government flirts with the mullahs while the mullahs kill women,” read one slogan above an image of Macron shaking hands with Raisi.

A day earlier, tens of thousands of people marched in Canada, calling for regime change in Tehran, and for Canada to increase sanctions.

Public broadcaster CBC showed images from Toronto on Saturday of motorists honking their support for demonstrators lining a five-kilometer (three-mile) stretch of road, wearing “Justice for Mahsa Amini” t-shirts and waving Iranian flags on the end of hockey sticks.

In Montreal, several women cut their hair as a crowd of more than 10,000 waved placards that read “Justice” and “No to Islamic Republic,” while chanting “Say her name. Say her name.” 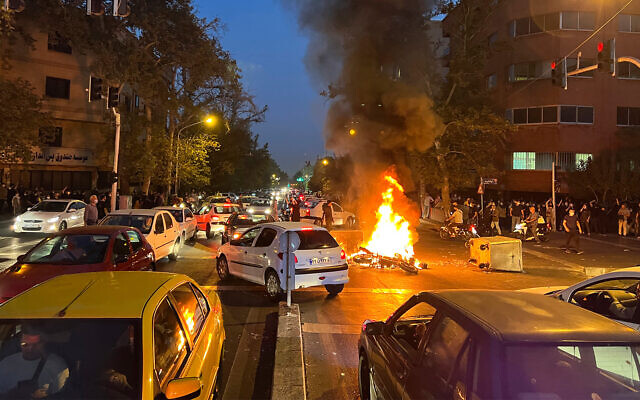 “It was for the Iranian women who are fighting for their freedom, for their lives in Iran,” a 30-year-old expatriate who only gave her name as Sin told AFP after chopping off her long dark locks.

She described cutting off her hair that flowed almost to the middle of her back as “nothing compared to” what women in Iran have endured.

“This is the least we can do to support my country, my women, my people in Iran who are under repression,” she said.