On a recent Thursday morning, a dinged-up sedan pulled up to a checkpoint in the northern Samaria area of the West Bank.

Quickly determining that the passengers were Jewish yeshiva students, the Israeli soldiers blocked the car from passing and asked it to clear the way for the line quickly forming behind it.

Vehicles with white and green Palestinian license plates were waved through the checkpoint without hassle. Israeli cars, with their yellow and black plates, were stopped for a brief inspection; drivers ascertained to be Arab were permitted to pass.

Some of the yeshiva students, in what was later described by the checkpoint soldiers and local Palestinians as a not-infrequent occurrence, crowded around one of the Arab Israeli cars and engaged in a shouting match.

“See? Whom do they not let pass? Jews,” said yeshiva administrator Shmuel Wende, 27, calling attention to the fact that here, the typical script of easy access for Jews and checkpoint scrutiny of Palestinians is flipped.

But this is the paradox of Homesh, a place that legally cannot exist, yet on the ground it does. Sort of.

This question has quickly become a political test for a fragile government undergoing repeated strain from exactly this type of ideological issue. 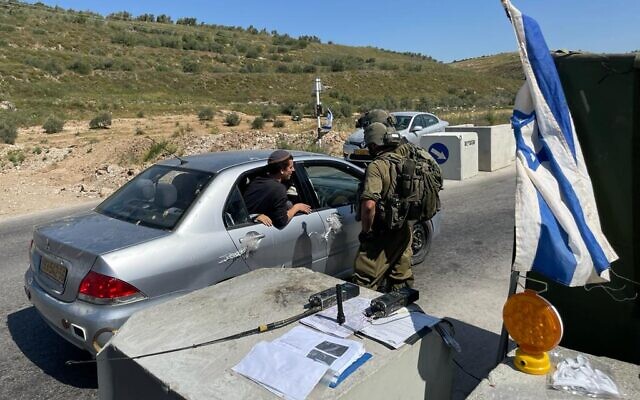 Yeshiva students at a checkpoint blocking the road to Homesh, May 26, 2022. (Carrie Keller-Lynn/The Times of Israel)

Why is Homesh relevant?

One of the few West Bank settlements forcibly evacuated by the Israeli government as part of the Gaza Strip-focused 2005 disengagement plan, Homesh has slipped in and out of mainstream Israeli consciousness for the past two decades.

Under Israeli law, all territories evacuated as part of the disengagement are off-limits to Jewish entry and settlement. Homesh was destroyed. But, for the past 15 years, this contentious hilltop has been home to a makeshift yeshiva, itself often destroyed and rebuilt.

The disengagement cut a deep wound across Israeli society and remains a trauma for many in the settler community. Whereas the Gaza settlements were walled off to Israeli access, Homesh sat comfortably in Area C of the West Bank, accessible enough for the determined to fight for a foothold upon it.

In this way, Homesh has remained a constant pain point for the Jewish settlers who yearn to rebuild a community upon it and for the Palestinians who decry it and its supporters as usurpers.

Since the December 2021 terror attack in which yeshiva student Yehuda Dimentman was shot to death leaving the outpost, the hilltop has again been catapulted into the national consciousness. So much so that the debate over how to handle the outpost threatens to chisel at the current government’s weakest spots. 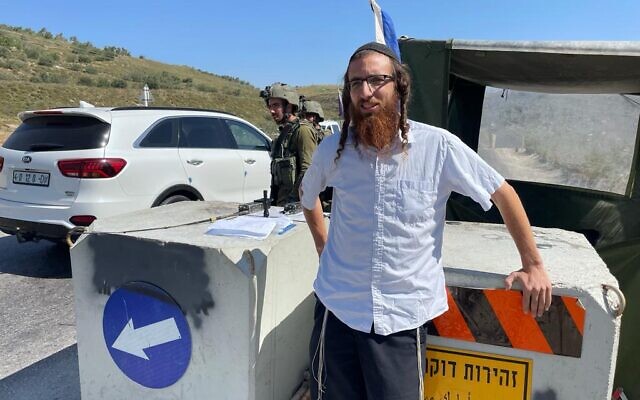 Yeshiva administrator Shmuel Wende at a checkpoint blocking the road to Homesh, May 26, 2022. (Carrie Keller-Lynn/The Times of Israel)

Supporters on the political right call for the legalization of Homesh, while detractors want Israeli law – which says the land must be evacuated – to be enforced.

Those who study on Homesh say that the situation has gotten more complicated in the past months, following Dimentman’s killing. In a decision decried by the right as a prize to terror and supported by the left as enforcement of the law, the government destroyed several of the hilltop’s structures. It also threw up two checkpoints meant to keep Homesh students and settlers out.

“We got punished. It all happened after the terror attack,” said Wende.

Today, Homesh is mostly a collection of tents on a hill abutting and overlooking several Palestinian villages. Its main feature is a yeshiva, which has been operating in some form for the past 15 years. While The Times of Israel was not given permission to cross the second checkpoint into Homesh to have a look, Wende said that about 40-60 young men study at the yeshiva. About half of these students are married, and live in the nearby settlement of Shavei Shomron with their families. The town became a refuge for residents evacuated from Homesh and nearby Sa-nur, and many evacuees can see their former homes from their new ones.

The unmarried, along with two to three yeshiva families at any given time, sleep on the hilltop. 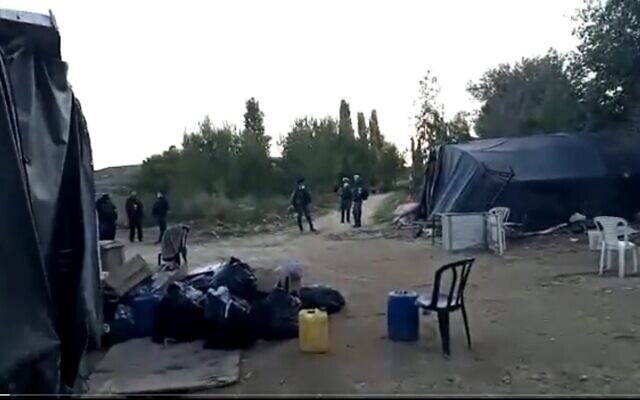 Wende said many of the yeshiva students are currently sleeping outdoors, where a breeze gives respite during the punishing summer heat. Food and water are driven up to the hilltop by cars that are sometimes allowed to enter. On days like Thursday when a car isn’t let through and an off-road route can’t be found, students coming from Shavei Shomron take only the most necessary provisions, strap on their backpacks, and prepare to walk.

The hike to Homesh is a feat in itself. The undulating road wraps around several Palestinian villages, and relations between the students and residents are tense. Following what Wende and several of the gathered students called a recent “lynching,” they now only walk in larger groups. The one preparing to set off on Thursday morning was a dozen strong.

After 60-90 minutes of walking upward to Homesh, the students arrive for a full day of religious study. Before the evening, they walk back down to restart the process the following day.

It’s a grueling and sometimes harrowing way of life, uncomfortable and fraught with tension.

So why do they do it?

Because, as they describe it, it’s their duty.

In service of religion and security

Wearing an olive-green regulation military hat and squinting at the sun, Asher Katzman, 24, passed the checkpoint on foot and prepared to hike to Homesh.

“It’s complicated and really exhausting, but we find the strength because it’s important to us,” the yeshiva student said of his almost-daily sojourn. That morning, it would take place in scorching 32°C (90°F) heat. 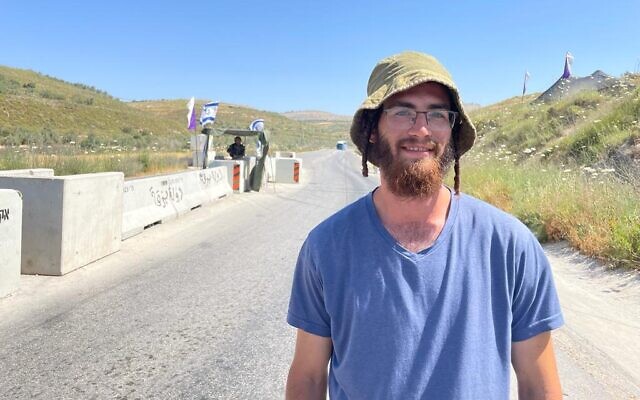 Yeshiva student Asher Katzman at a checkpoint blocking the road to Homesh, May 26, 2022. (Carrie Keller-Lynn/The Times of Israel)

Katzman explained his connection to Homesh as an interest in preserving Jewish sovereignty over the land of Israel.

“All of our existence in State of Israel is from [the divine granting of] the Land of Israel,” Katzman said. “If we continue with the disengagement, if we run away and retreat, then we won’t be here much longer.” He added that he meant this from “both from a security perspective and a values one.”

Tipping his hat down to shield his face from the intense sun, Katzman looked back at the checkpoint’s soldiers and mentions that a few months ago, he was a soldier himself. Now the army blocks his way.

“It was terrible. I was released from the army around the day of [Dimentman’s] murder and it’s very complicated. One day I’m a soldier, I spend a year with these people, and the next day the whole system blocks me from coming to my yeshiva,” Katzman said.

“The nation of Israel will come back here,” he declared, setting off on his way.

Fellow student Yonatan Ben Pazi, 23, also said he chose to study in Homesh because keeping the outpost going is part of holding onto Jewish sovereignty in Israel.

“I think this whole issue is important, that we have the entire territory in Israel,” Ben Pazi said, adding that while “the state decided to leave it, we have to hold onto it.”

“Also, I loved the yeshiva,” he said, smiling. 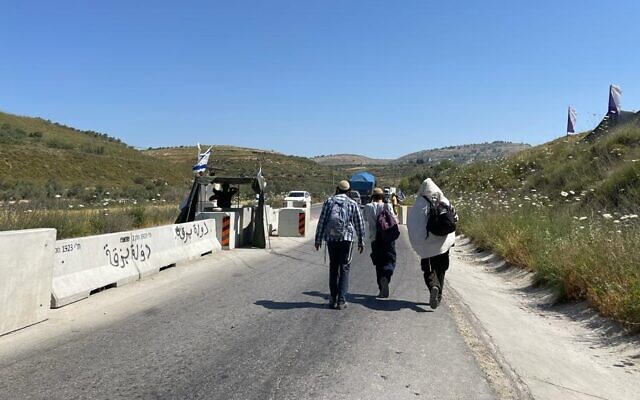 Yeshiva students at a checkpoint blocking the road to Homesh, May 26, 2022. (Carrie Keller-Lynn/The Times of Israel)

Wende, the yeshiva administrator, is originally from the central Israeli town of Rehovot, but moved to Shomrei Shomron to study at Homesh eight years ago.

“We live simply, happily here. Not wealthily. People come to Homesh because it’s important to them,” he said.

What is important about being in Homesh? “We’re here to show Jewish sovereignty,” Wende said, echoing the religious imperative expressed by his students.

He also echoed a security theme, tying Jewish presence in the West Bank to preventing the the area from becoming the type of Hamas terror group-controlled enclave that Gaza did shortly after Israeli settlements there were uprooted.

“I care about Homesh because I care about Acre, Netanya, Tel Aviv,” Wende said. “We all saw what happened after the expulsion [of Israelis] from Gaza — rockets all over Israel.”

Homesh is tightly nestled in the midst of Palestinian villages. Some supporters say that this is exactly the point, to show Jewish presence and to perhaps play a strategic role in controlling the space.

And, these are part of the reasons that Homesh irks the neighbors.

At Burqa, the closest Palestinian village to Homesh, longtime residents were quick to express their distaste. 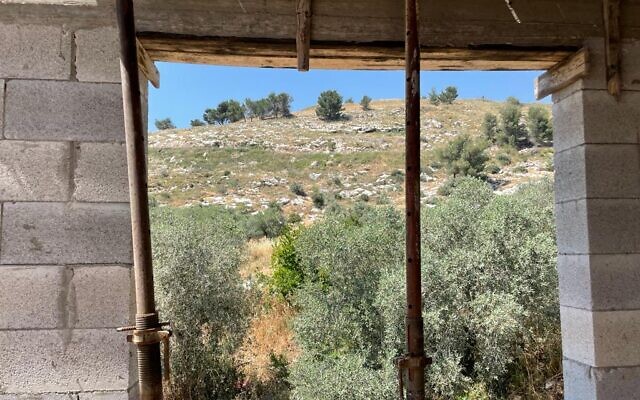 The view from an unfinished home in the Palestinian village of Burqa toward the Homesh hilltop, May 26, 2022. (Carrie Keller-Lynn/The Times of Israel)

In a house built by his father over the ruins of a mudbrick house constructed by an earlier generation, Nazir Saif, 67, lives with his two wives. The view from the front of their property is magnificent. Nablus is clear in the hazy sky, and on a clear day, Saif says, he can see Tel Aviv and the Mediterranean coast.

It’s the exact view shared by Homesh, which abuts the back of Saif’s property. Only a few hundred meters away lies a destroyed wall that used to demarcate the Homesh settlement.

Touring another corner of his property, Saif pointed to a grassy area where he claimed that settlers from Homesh lit a brush fire earlier that week. Army Radio reported a similar incident from Tuesday, but blamed Palestinians.

Saif said that incidents between Homesh settlers and nearby Israeli soldiers and Burqa villagers were “almost daily” in recent months. Just before The Times of Israel’s Thursday afternoon arrival, a video was shared across the village showing the aftermath of rocks allegedly thrown by Homesh settlers into a workshop at the intersection where their daily hiking path meets Burqa.

The Times of Israel was unable to substantiate the events, but the tension in the village was palpable. 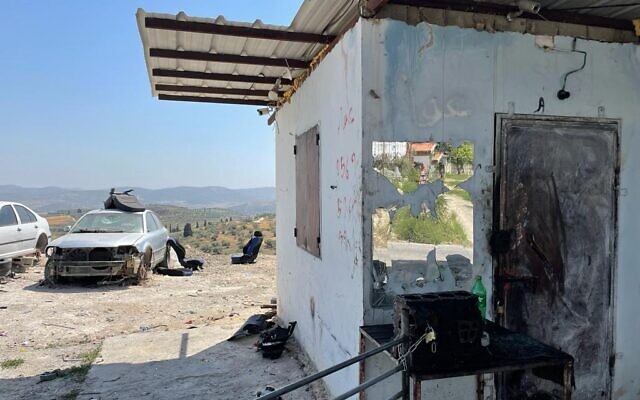 A broken mirror in a workshop at the entrance to the Palestinian village Burqa, May 26, 2022. (Carrie Keller-Lynn/The Times of Israel)

“We thought this would be over,” Saif said, referring to the unrest during the days following Homesh’s 2005 evacuation.

Limor Son Har-Melech – who came to Homesh in 2000 – remembers those days too, saying that when Homesh families were being evacuated by the army, local Palestinian villagers shouted a popular Hebrew refrain: “Kol hakavod l’tzahal,” or “Kudos to the IDF.”

Despite the struggle or perhaps because of it, the ideological and emotional draw to Homesh is so strong for some that it has survived even intense personal loss.

Son Har-Melech’s face still carries the scars of a 2003 terror attack that claimed the life of her first husband, Shalom (Shuli) Har-Melech. Driving on the same approach to Homesh on which today’s checkpoints stand, their car was ambushed by Palestinian gunmen and riddled with bullets.

“The thread that connects [people who settle Homesh] is devotion,” Son Har-Melech said.

“Something that you’re dedicated to, that you’re willing to give up things in your life for, it has this eternality,” she added.

Remarried today to another former Homesh settler, Son Har-Melech is the mother of 10 children. Only her eldest ever lived on Homesh, but, she says, the whole family considers the hilltop its real home. 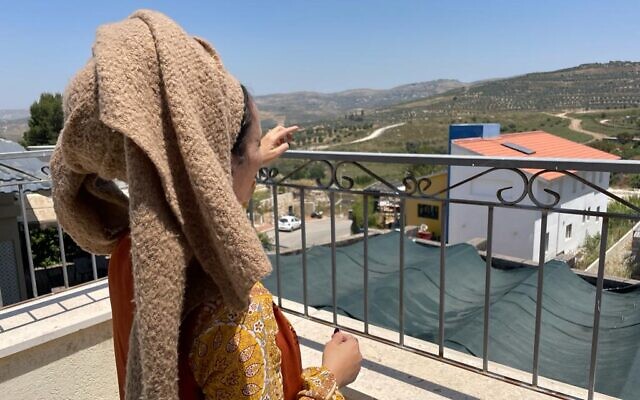 Limor Son Har-Melech looks out at the Homesh hilltop, from her Shavei Shomron home, May 26, 2022. (Carrie Keller-Lynn/The Times of Israel)

Sitting in the living room of her Shavei Shomron home, Son Har-Melech said that she and her husband were so committed to returning to their former settlement that it took until their seventh child before they decided to relocate from temporary trailer housing to their current spacious accommodation.

“When I’m folding laundry, when I’m washing the dishes, I’m looking at Homesh,” she said. Her current home has a direct line of sight to her old one.

“All of the kids know it, Homesh is our home,” she said. “Homesh is my home.”