Skip to content
HomeWorldTemporary presence, not a breakthrough: The Israeli diplomats in Qatar for World Cup

DOHA, Qatar — In the lobby of the Avenue Hotel, next to a busy Doha highway, the national flags of the World Cup’s 32 competing teams were plastered all over the walls. But while the Israeli flag was nowhere to be seen, there was an Israeli presence in the room.

Dressed in a royal blue suit despite the oppressive midday heat, Alon Lavi is part of a team of six diplomats dispatched by Jerusalem to assist Israelis visiting the gulf state. He said that after landing at Hamad International Airport, his team was “welcomed and accepted by the government representative with no issues.”

“We are here to establish the ability to give consular services… At the end of the day, we don’t have an embassy here, we don’t have any offices,” said Lavi, a spokesman for the delegation.

“Even basic functions like connecting to the systems required to provide travel documents. We had to bring an Israeli printer — it takes time.”

According to FIFA, 4,500 incoming fans have registered their nationality as Israeli. However, the Foreign Ministry’s own assessment suggests that around the same number again have entered or will enter Qatar using a non-Israeli passport, wary of potential security risks, bringing the number of Israeli fans to as many as 10,000.

Though they do not have official ties, Jerusalem engages with Doha to grant permissions for the distribution of Qatari aid in the Gaza Strip, but details on such contacts are rarely publicly confirmed. Doha also openly provides a base for leaders of Hamas, the Palestinian terror group that rules the Strip.

Qatar hosted an Israeli trade office from 1995 to 2000, but is seen as unlikely to join other Gulf states in establishing full ties with Israel due to its relationship to Iran, the Jewish state’s regional arch-foe. 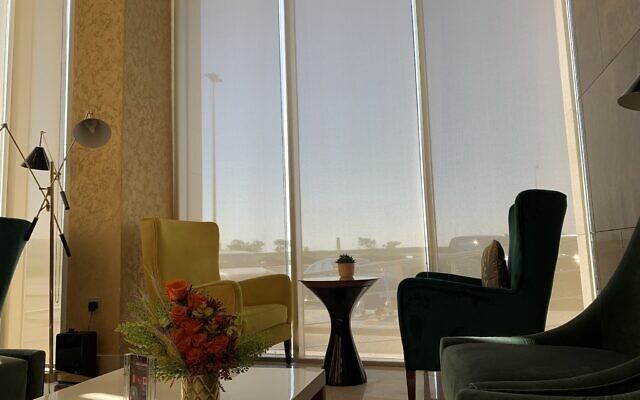 A hotel lobby in Doha’s Al-Sadd neighborhood where this reporter met Alon Lavi, one of Israel’s first diplomats in Qatar. (Ash Obel/The Times of Israel)

During his interview with The Times of Israel, Lavi took pains to emphasize that the renewed Israeli presence in Doha was temporary and did not herald a breakthrough in ties.

Due to the lack of diplomatic relations, there was a need for a special agreement between FIFA, Israel and Qatar to allow the Israeli diplomats to arrive and assist Israelis traveling for the tournament.

“We have been discussing this for months with FIFA and Qatar. When a country hosts games, it’s part of the deal,” Lavi said, adding that “typically for the Middle East, it culminated in an agreement in the 90th minute.”

So far, the consular officials have mostly dealt with Israelis losing their passports. In one incident, though, the team assisted in the search for an Israeli citizen who had briefly become lost and disoriented in Doha’s urban sprawl.

Asked if there were any extra restrictions placed on the Israeli officials by Qatari authorities, the diplomat said, “The expectation is to have an open channel and dialogue with local contacts, but no restrictions.”

Related: At Qatar’s first-ever kosher establishment, have a bagel but hold the blab

Lavi also criticized unverified reports that kosher food had been banned in the country, revealing that the incident “caused some headaches” with Qatari authorities trying to portray their country as religiously open and culturally tolerant.