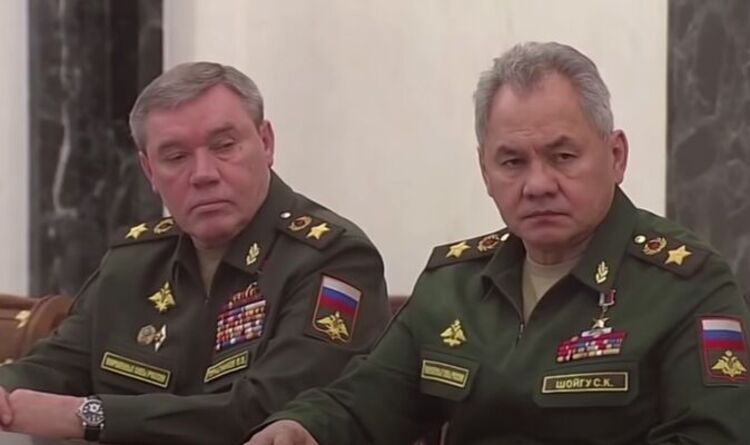 The retired US Major General believes that Russian forces operating in Ukraine have been left “extremely stretched.” He argued that the Russian military leadership have not invested in “command and control” ahead of the invasion because the Kremlin expected an east victory and not the stubborn resistance they gave encountered.

“So who’s in charge? And what you see here is essentially three separate fights that are going on.

“Now, that’s no big deal other than they’re extremely stretched. The resources are spread very, very thin. The Ukrainians have some great success here. They’ve reclaimed that city.

“So when you look at that, you go okay, oh, I’ve got these few different fights going on. But how do I synchronise airpower? How do I synchronise naval support? Where do my long-range fires go? All of those assets belong to somebody who has to redirect those based on success. You want to reinforce success? It’s not happening here.”

Major General Marks added: “These are independent fights that are going on right now.”

He continued: “When you look at that, it defies logic. And you go back to this question is, is there Command or Control?

“Or did they just say, Go get these targets in these specific areas, because they didn’t anticipate this level of resistance.

“They thought it was going to be an easier fight, and they probably went in cheap in terms of command control. That’s a bad decision.”

They thought it would be a lot easier to just walk into Kyiv in a couple of days and take the capital city,” he said.

The besieged port city of Mariupol is under continuous bombardment as Russian forces redouble their efforts to capture it after its leaders refused to surrender, Ukrainian officials said on Tuesday.

The city council said the pounding was turning Mariupol into the “ashes of a dead land”.

Russia’s RIA news agency said Russian forces and units of Russian-backed separatists had taken about half of the city, citing a separatist leader.