Skip to content
HomeWorldPummeled by Russian guns, Kharkiv is dark, quiet, but alive

It still lives, there is no question about that. Soviet-era streetcars chug doggedly along their tracks. Bearded hipsters and off-duty soldiers stand outside the few operating bars drinking beer and smoking cigarettes. It’s even possible to order an iced latte in the city center.

But open wounds are everywhere.  The six-story Soviet-era state administration building was targeted by Russian missiles in the first week of the war, and its blasted-out windows now gape blindly onto the city’s Freedom Square.

Ukraine’s second-largest city was a major scientific, academic, and industrial center before the Russian invasion, but its streets are now mostly empty. And when night falls, Kharkiv feels a world away from the relatively normal cities of Kyiv and Lviv.

To make it harder for Russian forces to target the city, Kharkiv is under blackout orders. Streetlights are not turned on, and homes are forbidden from having any light seeping through their curtains.

The city’s hotels are especially eerie. With the blackout in effect, it was impossible to locate the door to my room — or any door for that matter — on the third floor of my hotel without a flashlight. When Russia struck central Kharkiv with S-300 missiles shortly after midnight on Thursday night, hitting close enough to cause the hotel to shudder, the blackness in the hallways added to the tension for the guests groping their way toward the bar serving as the hotel’s makeshift shelter. 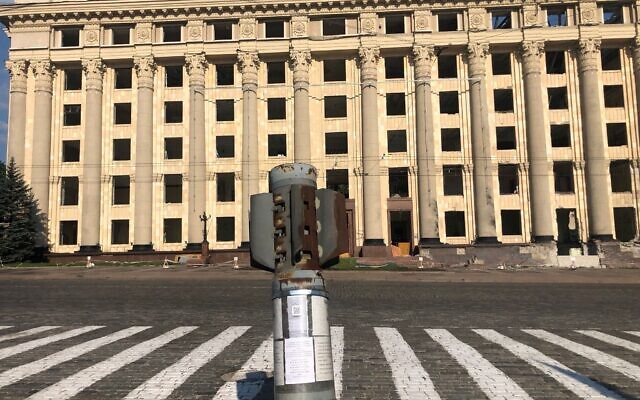 Within the battered city, certain neighborhoods have borne the brunt of Russia’s assault. Kharkiv’s northeastern reaches saw intense house-to-house fighting in the war’s early days, and were the target of shelling once Russia’s attempt to take the city was stymied by stiff Ukrainian resistance.

The Times of Israel toured the ragged edges of the city with IdeaSoft HelpKharkiv, a relief agency co-founded by Ukrainian-Israeli entrepreneur Peter Kolomiets, who ran a venture capital fund and software company in the city before the war.

With Kolomiets in Israel since the start of hostilities, Sergey, 34, runs the aid operation.

A former munitions officer in the Ukrainian Army, the convivial Sergey was building a career in sales before the war. He fled with his girlfriend to Lviv after Russia struck an antiaircraft battery in Kharkiv on the first day of the war. Three days later, Sergey’s brother-in-law asked him to return to set up the relief center in IdeaSoft’s headquarters.

He initially gathered volunteers through the local community chat forum for airsoft players, a team game using mock weapons. Now the operation is humming with a relaxed efficiency. There is a gamer vibe among the volunteers, and they trade jokes as they prepare to deliver packages in areas that still absorb Russian artillery and rockets.

IdeaSoft buys almost $50,000 of medicine a month, and has delivered packages to over 80,000 addresses during the war. Some of the locations are basements where entire families are sheltering. 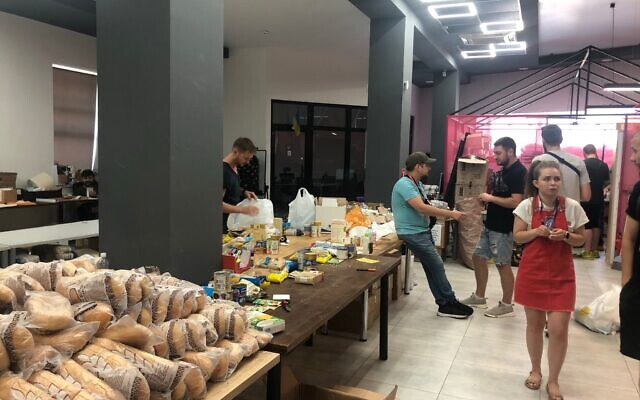 Though none of the volunteers have been injured on their rounds, there have been plenty of close calls. “Mainly it is bombs near when we give people to their delivery, their order,” said Sergey on Thursday. “Then my guys do first aid.”

There was a slim, but real, chance of coming under Russian fire Thursday morning as The Times of Israel joined volunteers Dima and Yevgeny. While they loaded their white van with boxes, the sound of explosions somewhere in the city echoed through the streets. We strapped our kevlar vests on, and put our helmets by our feet as we clambered into the vehicle.

As we headed northeast out of the city center, we stopped at an elementary school that had been hit by a missile, its skeleton now blackened by fire.

We passed the building where Dima lives in a ninth floor apartment. “You can see the rockets being launched from Belgorod,” he said, referring to the Russian border city an hour’s drive away. “We can see where it goes up and where it goes down.” 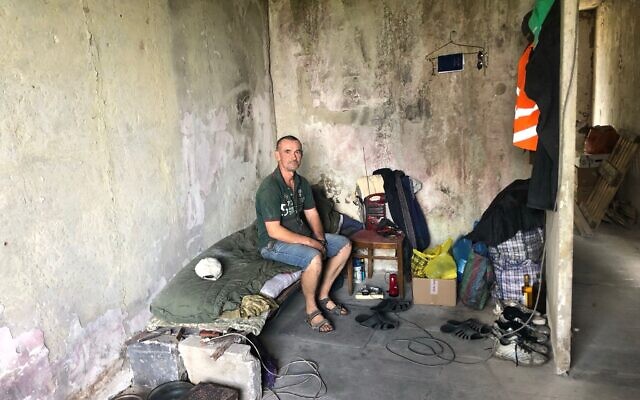 Alexander, a construction worker, sits in his apartment after a Russian missile strike, July 27, 2022 (Lazar Berman/The Times of Israel)

A nine-story apartment building on Buchmy Street had been hit by a rocket on April 3, sparking a fire that gutted the structure. Piles of bricks lay in front of an entrance that still reeked of smoke.

A construction worker named Alexander owns an apartment on the fifth floor. He was asleep, alone at home, when the rocket hit at 1 a.m. “The rocket went through the building, and it set the ninth floor on fire,” he said. “I just ran out, because I thought that after the first hit there would be a second.”

Though the building no longer has electricity, running water, or even windows, Alexander still lives in his apartment. He sleeps in a military sleeping bag on a cot. a single wire running to the ground below keeps a radio alive on a chair. Volunteers from World Central Kitchen bring him food, which is stacked on a table opposite his bed. He saves his burnt dishes and silverware in cardboard boxes in what was the kitchen.

In the Saltivka district farther to the northeast, the living city reaches its limits. Buses won’t venture past a designated intersection, and not a single store is open. Rows of white apartment buildings bear the marks of recent fires. Carcasses of cars riddled with shrapnel holes molder in parking lots, some of them overturned in impact craters. Sounds of television drift through the destruction, evidence that there are still small pockets of life among the bare walls and broken glass. 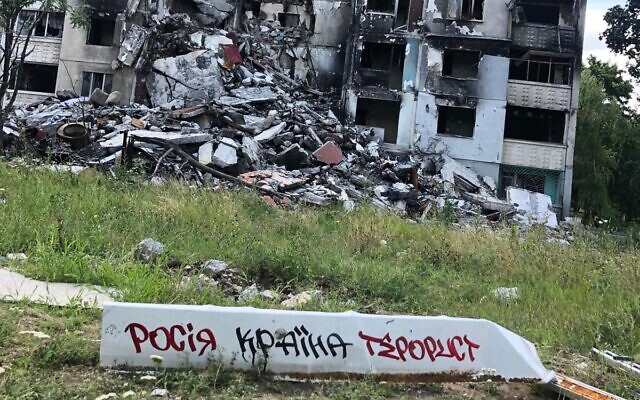 “In order to live elsewhere, you need resources,” explained Yevgeny. “And there is almost no work for the people that have stayed. Money is scarce, food is scarce. That’s why we have to deliver.”

“Russia is a terrorist state,” declares graffiti painted on a piece of pavement on Friendship Among Nations Street. Behind it, a high rise teeters in silent testimony to the charge, the disemboweled apartment spilling out the contents of its apartment onto the grass.

Driving back in the direction of the city, the neighborhoods increasingly become animated once again. Residents wait at bus stops, cars move along the streets, and shoppers poke around sidewalk vendors.

But Russian missiles take their toll here as well. An outdoor market was turned into rows of burnt-out stalls on the 15th day of the war. It is still possible to discern what each shop sold, as the remains of their wares are recognizable among the wreckage. 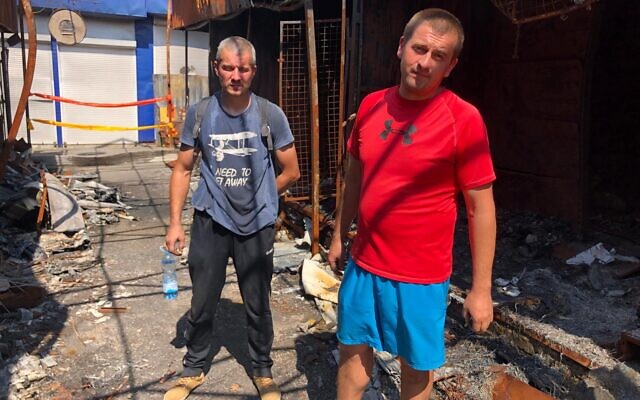 Zhenya picked through his electronics store with a friend. “We are trying to live and clean up,” he said, estimating his losses at $20,000.

“Whatever happened to us, I want to happen to the Russians,” he said.

There is a psychological factor to the Russian strikes, claimed Dima. “The Russians used to strike at 11 p.m. every night. The people knew there would be explosions. Then they switched to 4 a.m. Then they just switch the time.” 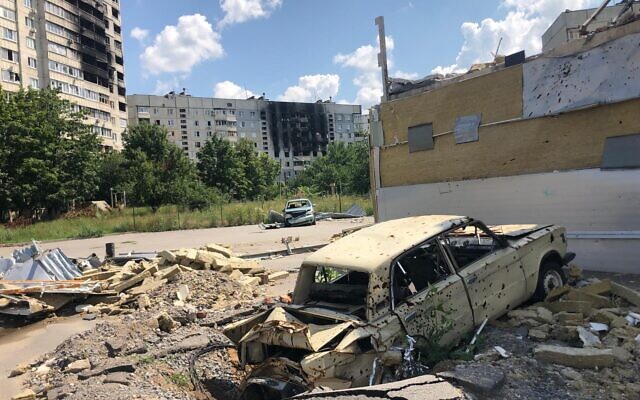 The van bumps through chewed-up lanes between apartment complexes and empty industrial sites to reach waiting families. The volunteers check IDs, then hand over boxes and loaves of bread. Most of the recipients are in good spirits, or at least make a brave show of it.

The long hours at IdeaSoft can take a toll on the staff. Two young women sit in front of computers, taking calls and marking addresses on their screens.

Katya, 25, lives in the basement of the office now. Originally from Mairupol, she has no family in Kharkiv. 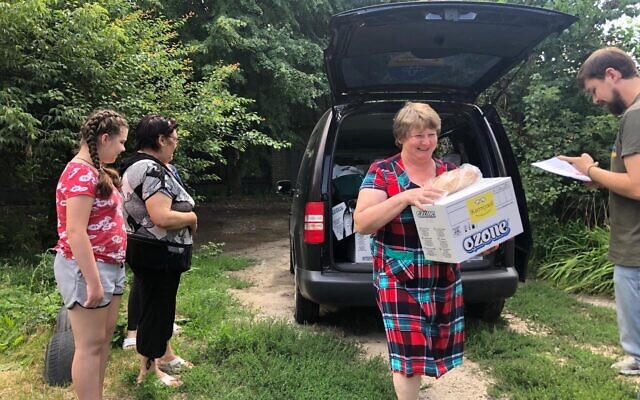 “It’s an emotional roller coaster,” she said. “You can wake up in one mood and end up in another one. We’re always in tension for long periods of time, so it has consequences on our well-being.”

Nastya, whose aunt lives in the Israeli city of Bat Yam, said her parents refused to leave Kharkiv. “We were born here, we will die here,” said the 27-year-old. “We have relatives and family here, how can we leave? Someone must help.”

Amid the computers, the stacks of supplies, and the refrigerators stocked with Mexican beer, there are signs of real anger among the staff.

They feel somewhat abandoned by their government. “The further west that you go, the better the military is armed,” said Sergey.

They’re tired of hearing that Ukraine’s air defense networks work in Kyiv and  Lviv, he said. “Here, everything lands.” 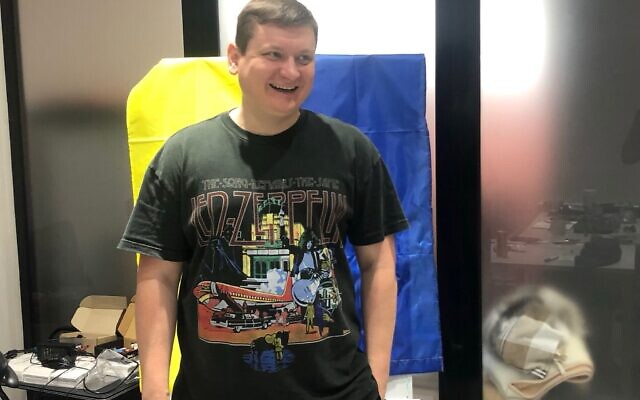 Of course, most of their rage is reserved for the Russians.

“They’re like fascists — it’s real fascists,” Sergey scowled. “It’s — they rape, they kill, they do everything. They are like a stupid monkey. No, a monkey’s more clever.”

“The Russians are morons. They should die, all,” he continued.

Sergey took a sip of beer, then reconsidered. “Only 100 million should die.”