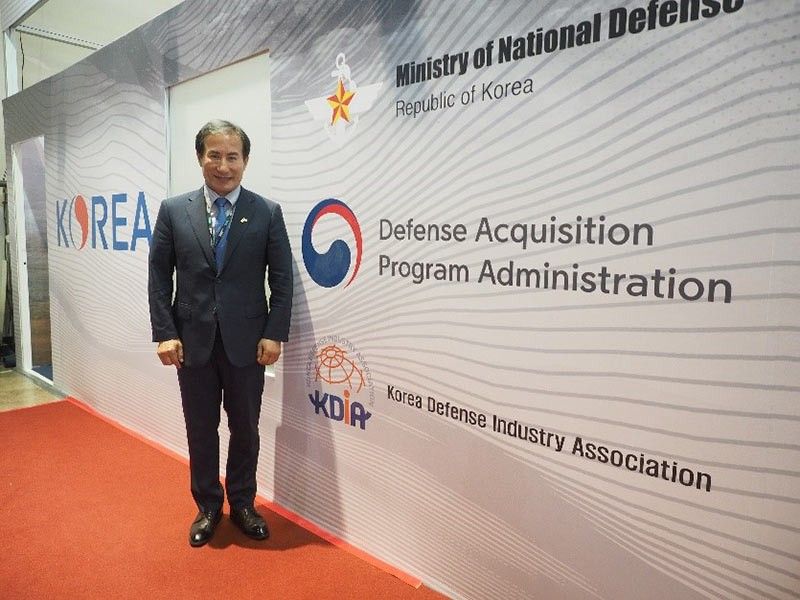 MANILA, Philippines — The Korean defense industry is looking at the Philippines as a key market for Korean-made military hardware—now and in the near future.

According to Sang Woong Na, retired Lieutenant General and executive vice chairman of the Korean Defense Industry Association (KDIA), they are observing that the Philippines is fast becoming a very big market, especially naval hardware, particularly for Korean-made frigates and destroyers.

Sang said that another Korean shipbuilder, Daewoo Shipbuilding and Marine Engineering, tended an offer for a submarine as part of the Philippine Navy’s modernization program.

“The Philippines really is a huge and strategic market for Korean military equipment not only for naval but also for land and aerospace. For Korea, the Philippines is really becoming a key market, particularly in the ASEAN region, where Malaysia, Indonesia amd Thailand are also key markets,” explained Sang at the sidelines of the Asian Defense and Security (ADAS) 2022 held recently at the World Trade Center in Pasay City.

Korea has been a major participant in ADAS, which it joined since its inception back in 2014. On this year’s edition, seven Korean companies participated.

Sang said that KDIA is also fully aware of the efforts of the Philippines to modernize its military, which he believes is already in Phase 2, or even Phase 3, with regard to naval, land and airspace, and sees a big chance of Korean participation in the Philippine military modernization efforts.

“Our principle in selling military equipment is not just ‘sold and it’s done.’ Korea also brings value in terms of maintenance, repair and overhaul (MRO), which we believe is important, and logistics through Integrated Logistics Support (ILS).

“As a former military man, I know the importance of maintaining equipment to keep the armed forces fully operational. Korea has good experience in MRO and there’s no country like Korea when it comes to investing in MRO,” Sang explained.

At present, the Korean military is ranked as the 6th most powerful military in the world as of 2022 according to the Global Firepower Index. The export sales of the Korean defense industry is also growing year by year.

Sang noted that the Korean K9 Thunder 155 mm self-propelled howitzers have a 69% global market share. “That means a lot and tells a lot about the capabilities of the Korean defense industry.”

He said Korea’s multi-role fighter jet, the FA-50, is now being used by the Philippine Air Force. The country ordered 12 FA-50 aircraft, with a contract signed in 2014 worth P18.9 billion with Korea Aerospace Industries. The first two aircraft arrived in November 2015, while the rest were delivered in May 2017.

Right now, Sang said the Korean defense industry is investing on the Fourth Industrial Revolution, particularly in the latest technologies such Internet of Things, cybertechnologies, also robotics to prepare for future platforms such as the Unmanned Aerial Vehicles, even unmanned naval ships and other unmanned-related technologies.

“We are preparing for the future platforms. Majority of the defense hardware we manufacture now is Korean-made, all homegrown, except for the high technology kind like those related to space where we still rely a bit on US technology,” he said.

Sang added that Korea is into cyber-defense and satellites. Aside from that, the county is also investing in 4.5 generation fighter aircraft, the KF-X, which he said can compete with other modern aircraft like the Eurofighter.

The Korea Defense Industry Association was established in 1976 to enable Korean defense companies to raise issues or concerns and also communicate with the government and armed forces with regard to policymaking, Sang explained.

He said that when the US withdrew its troops from South Korea, the government started thinking about self-defense. “We wanted to become self-reliant on our defense needs so we started developing Main Battle Tanks, howitzers, mortars and it went on to the naval sector such as ships and then proceeded to other equipment such as training jets and helicopters.”

He said the Philippines and Korea have a long history of friendship together. It dates back to the 1950s when the Philippines sent over 7,000 personnel known as the Philippine Expeditionary Forces to Korea or PEFTOK for assistance during the Korean war.

He hoped that the Philippine-Korean friendship remains firm strategically. “The relationship between the two countries is not just anymore about K-Pop or K-drama, and we will always be thankful to the Philippines for their participation in the war.”