It was uncharted territory for the Israeli journalist. Wandering through the rustic outdoor marketplace in Doha before the start of the World Cup, he zeroed in on a Qatari man in his traditional headdress and white flowing robe and asked for an interview.

“Which channel?” the Qatari asked. The journalist replied he was from Kan, Israel’s public broadcaster.

The Qatari was stunned. “Where?”

“Israel,” the journalist repeated. A split second later, the interview was over.

The exchange ricocheted around social media, reflecting the latest political flash point at the first World Cup in the Arab world — never mind that neither Israeli nor Palestinian national teams are competing in the tournament.

Palestinians shared footage of the Doha encounter between the Qatari man and the Israeli journalist, along with other clips of Palestinians and Qataris angrily confronting Israeli reporters live on TV. They viewed it as proof that although Qatar has permitted Israelis to fly directly to Doha and receive consular support for the first time in history, the conservative Muslim emirate has no intention of cozying up to Israel.

Israel’s Channel 13 sports reporter Tal Shorrer said he has been shoved, insulted and accosted by Palestinians and other Arab fans during his live reports from the tournament.

“You are killing babies!” a few Arab fans yelled as they rammed into him during a broadcast this week.

Qatari media, meanwhile, has published such videos with the caption: “No to normalization.”

Officials in Qatar, with their history of public support to Palestinians, have insisted the temporary opening to Israelis was purely to comply with FIFA hosting requirements — not a step to normalizing ties like neighboring Bahrain and the United Arab Emirates did in 2020. Qatar has warned a spike in violence in the West Bank or Gaza Strip would derail the arrangement.

Nonetheless, thousands of Israeli soccer fans are expected to descend on Doha for the World Cup, diplomats say, including some on 10 direct flights planned throughout the next month.

Many Israeli fans marvel over the intriguing novelty of being in a country that has no diplomatic relations with Israel. Security-minded citizens remark on how safe they feel. 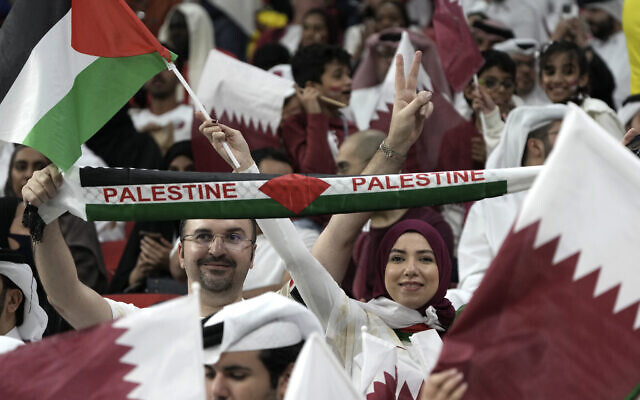 Fans wave the Palestinian flag and cheer prior the World Cup soccer match between Qatar and Ecuador at the Al Bayt Stadium in Al Khor, November 20, 2022. (AP Photo/Ariel Schalit)

“My friends and family thought it could be dangerous but it’s fine,” said Eli Agami, an aviation executive who lives near Tel Aviv. “I don’t go around telling people but I don’t think anyone cares if you’re Israeli or you’re Jewish. Everyone just cares about the game.”

Six Israeli diplomats have set up shop at a travel agency office in Doha, ready to respond to crises large and small. To limit potential problems, the Foreign Ministry has launched a campaign urging Israelis to lie low.

“We want to avoid any friction with other fans and local authorities,” said Alon Lavie, a member of the delegation, citing legions of fans from Iran, Saudi Arabia and other countries either hostile or frosty toward Israel now flooding Qatar. “We want to remind (Israelis)… you don’t need to shove your fingers in other people’s eyes.”

Israelis have made themselves at home among Doha’s glittering skyscrapers. Qatar’s first kosher kitchen set up near the airport, supplying hotels and fan zones with the classic eggy Jewish challah bread and olive and hummus bagel sandwiches. They plan to cook other food for the Jewish Sabbath that starts Friday at sundown, with all ingredients conforming to kosher dietary laws.

“We have received many, many questions and requests,” said Rabbi Mendy Chitrik, who oversees the effort. 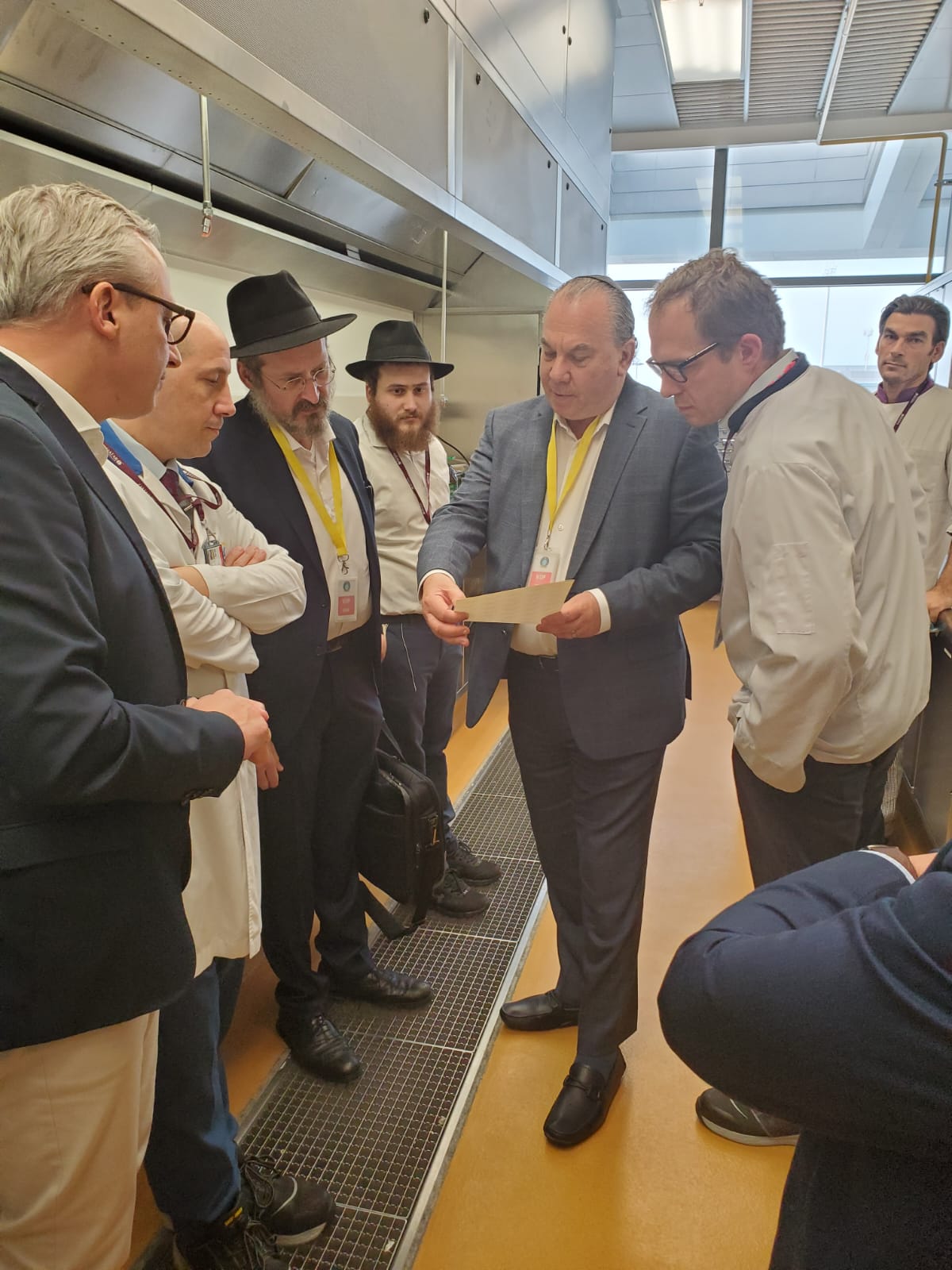 Israel’s main channels have been allowed to broadcast from Doha, providing Israeli viewers with continuous coverage of the matches. But unlike other major foreign networks centrally located in downtown Doha, the Israelis roam around without a formal studio.

Shorrer said that while interactions with Qatari officials had been perfectly pleasant, the streets were a different story. He said he advises religious Israeli fans to hide their kippas and ditch their Stars of David so as not to provoke hostility. When a cellphone salesman noticed his friend’s settings in Hebrew, he exploded with anger, screaming at the Israeli to get out of Doha.

“I was so excited to come in with an Israeli passport, thinking it was going to be something positive,” he said. “It’s sad, it’s unpleasant. People were cursing and threatening us.”

Palestinian fans from across the Arab world — including descendants of those who fled or were forced from their homes in Israel’s 1948 War of Independence  — traipsed through the streets of Doha this week draped in Palestinian flags. Some also sported Palestinian armbands.

A group of young Palestinians who live in Doha chanted, “Free Palestine!” while marching through Doha’s historic Souq Waqif market on Sunday. 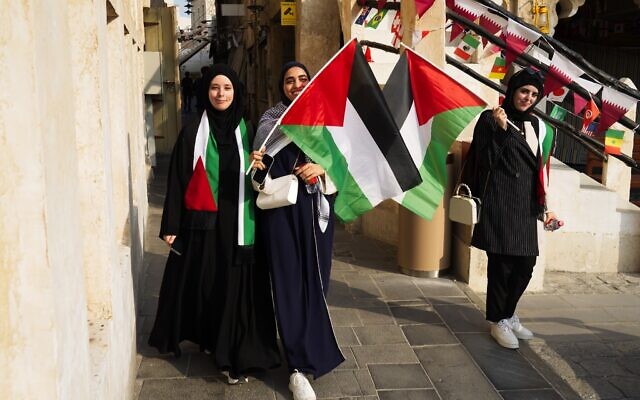 “I’m a little bit upset,” she said, adding she was sure their presence was not Qatar’s choice. Doha mediates between Israel and the Hamas terrorist group and sends cash for the salaries of civil servants in the Hamas-ruled Gaza Strip.

When FIFA announced the unprecedented direct flights from Ben Gurion International Airport in Tel Aviv to Doha, Qatari authorities promised the travel arrangement also would apply to Palestinians in both the West Bank and Gaza, the latter of which has been under a crippling Israeli-Egyptian blockade for 15 years, ever since Hamas seized control there.

But five days into the tournament, it remained unclear how officials would carry out that promise.

A senior Israeli diplomat, Lior Haiat, said all Palestinian fans seeking to fly out of Israel’s airport must get Israeli security approval to leave and return — an often-grueling and unpredictable process. “It takes a while,” he acknowledged.

Imad Qaraqra, spokesman of the Palestinian General Authority for Civil Affairs, said he hadn’t heard of any Palestinians requesting Israeli permission to leave from Ben Gurion. Palestinians from the West Bank traveled to Qatar this week from Jordan’s airport, while Palestinians in Gaza exited into Egypt through the enclave’s Rafah border crossing.

Palestinian fans who made the long journey said they felt their attendance at the world’s biggest sporting event served a political purpose.

“I am here as a reminder that in 2022, our land is still occupied,” said Moawya Maher, a 31-year-old businessman from Hebron, a particularly tense West Bank city. He was dancing at a concert at the FIFA Fan Festival, wearing a Palestinian flag as a cape. “I suppose it’s a miserable situation. But I’m also proud.”