New York Jewish Week via JTA  — Two leading Jewish conservatives ignited a firestorm Thursday when they announced, in a Wall Street Journal op-ed, that the Museum of Jewish Heritage in New York City had told them they could not hold an event there if Florida Gov. Ron DeSantis was invited.

The op-ed was titled “Persona Non Grata at a Holocaust Memorial” and was authored by Elliot Abrams and Eric Cohen, the chairman and CEO of the Tikvah Fund, a think tank that is an engine of Jewish conservatism.

Tikvah had hosted many events at the Holocaust memorial museum, they wrote, but the leadership conference set for June 12 hit a wrinkle — one that Abrams and Cohen said pointed to growing intolerance of conservative ideas.

“Out of the blue, we were told by the museum staff that Mr. DeSantis didn’t ‘align with the museum’s values and its message of inclusivity,’” the op-ed said. “Either we disinvite the governor, they said, or our event was unwelcome.”

That account made sense to many of the people who read it. To many people on the left, it was obvious why New York’s Holocaust museum wouldn’t welcome DeSantis, who has close ties to former President Donald Trump and mocked but declined to condemn neo-Nazi protesters in his state. To people on the right, the purported incident fit neatly into a prevailing narrative about “cancel culture,” in which liberal elites seek to tamp down ideas they don’t share.

“No one was banned or canceled,” a spokesperson said in an emailed statement. “The fact is that no contract with the Tikvah Fund was ever signed for this rental event to be held at the Museum and no deposit was ever made.”

Today we responded to a factually inaccurate opinion piece in @wsj about a proposed rental event. Let us be clear: No one was banned or cancelled. No contract with the Tikvah Fund was ever signed for this rental event to be held at the Museum and no deposit was ever made. 1/3

As a private institution, the Museum of Jewish Heritage has full discretion about who can rent its space. The New York Jewish Week obtained a copy of the contract between the museum and Tikvah, which Cohen said he had signed. That contract explains that museum facilities cannot be used for advancing a particular religious doctrine, political fundraising or activity that is advocating for a political candidate, group or ideology.

It was after Cohen signed the contract that the museum learned DeSantis was a scheduled speaker, Cohen said. Cohen said he had spoken by phone with the museum’s CEO, Jack Kliger, who told him that the museum does not welcome political speakers of any ideology.

“I explained to him that we have had many events there with prominent speakers from public life, and asked him to reconsider,” Cohen said.

Critics of the museum have noted that Democratic Rep. Alexandria Ocasio-Cortez spoke at an arts event there in 2018, when she was a congressional candidate. The museum’s leadership has changed since then, and the country has grown more politically polarized.

The latest episode offers further evidence of that polarization — and that even Holocaust museums are not immune from America’s mounting culture wars. 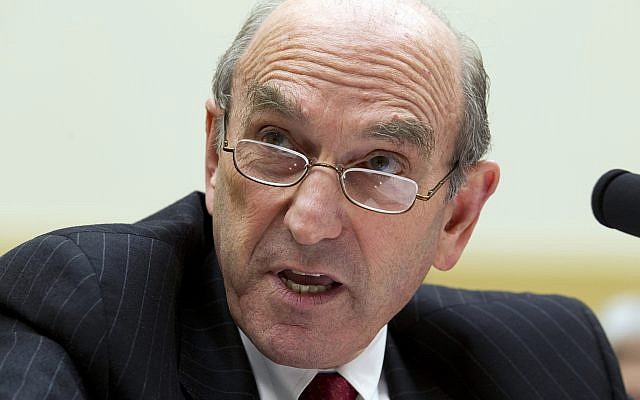 “The new thought police don’t see themselves as acting solely or primarily out of fear. They believe they are defending the good: inclusion against hate, equality against discrimination, victimized minorities against white privilege,” they wrote. “Yet the pseudo-gospel of inclusion breaks down quickly. In the name of inclusivity, a Jewish museum sent us a clear message: Some people are to be excluded.”

They added, “In the name of fighting hate, the museum decided that the millions of Floridians who support Gov. DeSantis — including many Jews — are so hateful that they don’t even merit a voice in the great American conversation. A museum of tolerance has become intolerant.”

The museum called the piece “factually inaccurate” and said it had not been contacted for comment. The Wall Street Journal did not return a request for comment.

The op-ed elicited a flurry of responses, including pride from DeSantis’ critics and concern from conservatives.

“The Museum has always taught ‘Thou shalt not stand idly by.’ They just met the challenge of that message and they did so admirably,” wrote Danny Wool, a historian who worked as an educator at the museum in the past, on Facebook. “I never felt prouder to say that I am an MJH alum.”

The Coalition for Jewish Values, a group of right-wing rabbis that formed in the wake of Trump’s election to advance conservative political ideas, issued a statement “castigating” the museum.

“It is hard to see this decision as anything but politically motivated, and directly contrary to Jewish interests as well,” Rabbi Moshe Parnes said in the statement. “As a Floridian and a rabbi, I can say that one would be hard-pressed to find an elected official more attentive to the Jewish community than Ron DeSantis.”

In New York City, Republican City Council members Inna Vernikov and Joe Borelli sent a letter to Kliger, the museum’s CEO, expressing “disappointment” about Abrams and Cohen’s charge. They asked that the museum “immediately rescind” the decision to prohibit DeSantis from speaking at Tikvah’s conference. 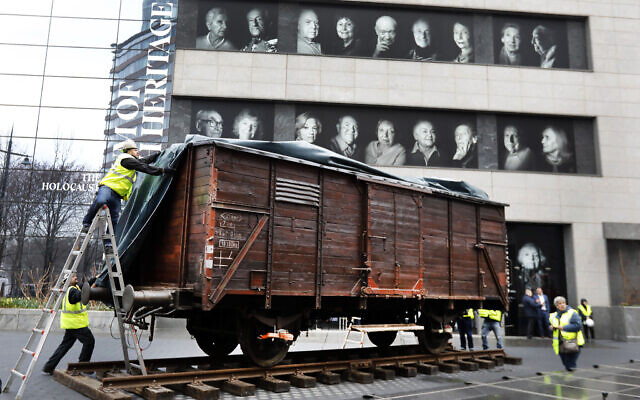 Illustrative: Portraits of Holocaust survivors are displayed at the Museum of Jewish Heritage as a vintage German train car, like those used to transport people to Auschwitz and other death camps, is uncovered on tracks outside the museum, in New York, Sunday, March 31, 2019. (AP Photo/Richard Drew)

The letter compared barring DeSantis from the museum to Nazis censoring freedom of speech in the 1930s.

“In modern day America, we have seen attempts to cancel political speech, in a way that is reminiscent of Nazi and Soviet Era censorship,” the letter said.

The episode comes as DeSantis makes news for his stances on abortion — Florida would ban abortion after 15 weeks if the Supreme Court overturns Roe v. Wade, as it is expected to do shortly — and LGBTQ inclusion. He is a champion of Florida’s new “Parental Rights Education” legislation – dubbed by critics as the “Don’t Say Gay” bill – prohibiting schools from discussing gender and sexuality with students in kindergarten through third grade.

According to the museum, none of that was the reason for Tikvah’s event not taking place there.

“This is not a free speech or censorship issue,” the spokesperson said. “This was simply a contractual and logistical decision.”

He added that the Tikvah Fund is “trying to create a fight where none exists.”

Michael Glickman, who ran the museum from 2016 to 2019 and now leads JMuse, an organization seeking to improve Jewish arts and cultural institutions, told the New York Jewish Week that he regretted that “the cancellation became the story” given how much value the museum could add in the current climate.

“This museum has a depth of resources in their collections that could easily come to life and speak to situations like this,” said Glickman, who added he did not have any information about the saga beyond what had been publicly reported. “At the same time, public history museums have the opportunity of calling on history to address contemporary moments (perhaps even shining a light on what happens when people in power actively work to restrict basic human rights and/or stay silent in the face of Nazi protests).”

He added, “It’s just too bad that everyone got sidetracked and distracted by politics. I suppose that is just the environment we live in.” 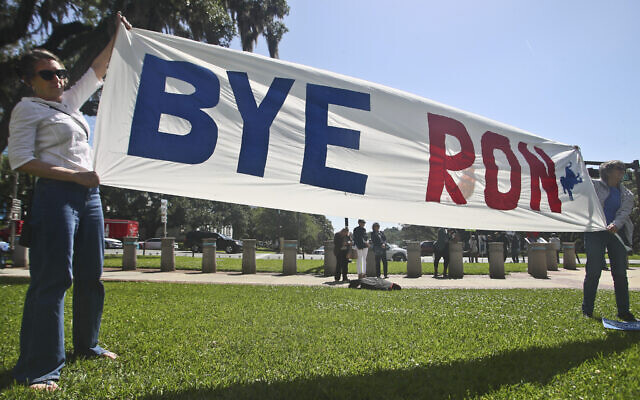 For now, Tikvah is planning to stage its conference as planned on June 12 at Chelsea Piers’ Pier Sixty, a private event space. Confirmed speakers include Trump’s secretary of state, Mike Pompeo; Bari Weiss, the writer who quit the New York Times over what she said was antisemitism there and has since built an anti-“cancel culture” brand on Substack; and Ruth Wisse, the Harvard professor and Tikvah mainstay.

Meanwhile, the museum is gearing up to open a major revision of its main exhibition June 30 — and it says DeSantis is invited.

In a statement, it said, “We welcome Governor DeSantis and elected officials from across the spectrum to visit the Museum of Jewish Heritage – A Living Memorial to the Holocaust for a tour of our new exhibition, The Holocaust: What Hate Can Do, when it opens this summer.”