Skip to content
HomeWorldLebanon votes in first election since crisis, with little hope for change

BEIRUT (AFP) — Lebanon headed to the polls Sunday for its first election since multiple crises dragged it to the brink of failed statehood, with the ruling elite expected to comfortably weather public anger.

The parliamentary election is a first test for opposition movements spawned by an unprecedented anti-establishment uprising in 2019 that briefly raised hopes of regime change in Lebanon.

Yet observers have warned not to expect any seismic shift, with every lever of power firmly in the hands of traditional sectarian parties and an electoral system rigged in their favor.

After an underwhelming campaign stifled by the nation’s all-consuming economic predicament, 3.9 million Lebanese will be eligible to vote when polls open at 7:00 a.m. (0400 GMT).

Independents can hope for more than the lone seat they clinched in 2018 but most of parliament’s 128 seats will remain in the clutches of the very political class that is blamed for the country’s woes.

The outgoing chamber was dominated by the Iran-backed Shiite group Hezbollah and its two main allies: the Shiite Amal party of Speaker Nabih Berri and the Christian Free Patriotic Movement of President Michel Aoun. 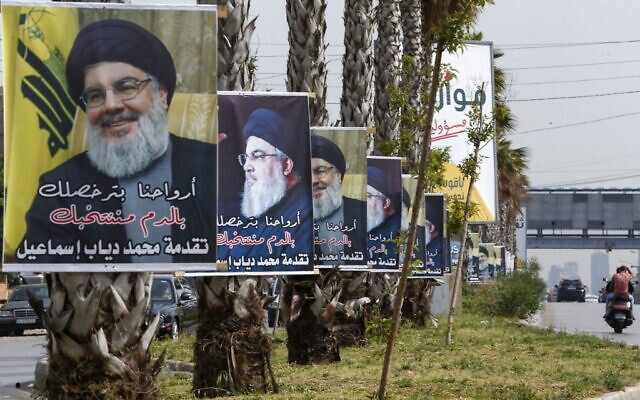 Posters expressig support for the leader of Lebanon’s Hezbollah Hassan Nasrallah, hang on a main road in the capital Beirut, on May 14, 2022, on the eve of parliamentary elections. (LOUAI BESHARA / AFP)

“It seems almost impossible to imagine Lebanon voting for more of the same — and yet that appears to be the likeliest outcome,” said Sam Heller, an analyst with the Century Foundation.

Since the last election, the country has been mutilated by a blast at the Beirut port that went down as one of the largest non-nuclear explosions in history and deepened one of the most spectacular economic downturns of our time.

The Lebanese pound has lost 95 percent of its value, people’s savings are blocked in banks, minimum wage won’t buy a tank of gas and mains electricity comes on only two hours a day. 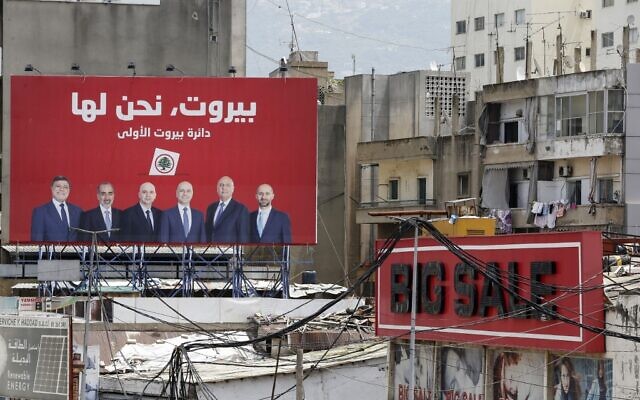 An electoral billboard is erected atop a building in Lebanon’s capital Beirut, on May 14, 2022, on the eve of parliamentary elections. (LOUAI BESHARA / AFP)

More than 80% of the population is now considered poor by the United Nations, with the most desperate increasingly attempting perilous boat crossings to flee to Europe.

Once described as the Switzerland of the Middle East, Lebanon ranked second-to-last behind Afghanistan in the latest World Happiness Index released in March.

Numbed by the daily hardships of the economic crisis, many registered voters have seemed indifferent to an election that they doubted would even be held until a few days ago.

Despite international pressure to reform Lebanese politics, the corruption that sank the country is still rife, including in the electoral process.

The crisis has only widened the gap in purchasing power between the politicians who buy votes and the electorate that sells them. 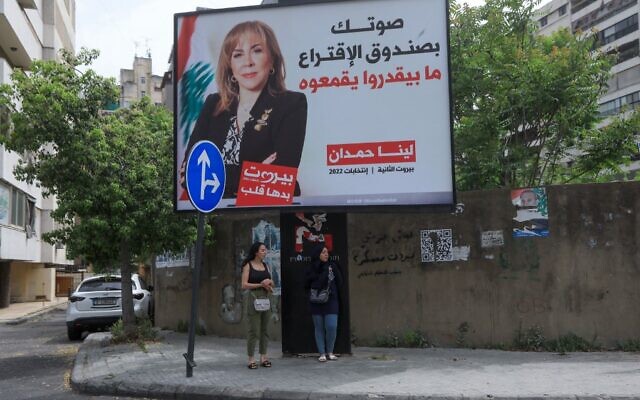 Women stand beneath an electoral billboard in Lebanon’s capital Beirut, on May 14, 2022, on the eve of parliamentary elections. (LOUAI BESHARA / AFP)

At one candidate’s rally in the northern city of Tripoli, some well-wishers disappointed by the lack of cash handouts made off with the plastic chairs.

While Sunday’s election might not topple their reviled leadership, some Lebanese see the vote as an important test for the principles that arose during the October 2019 uprising.

For Marianne Vodolian, the cataclysmic August 2020 explosion that disfigured Beirut and killed more than 200 people makes voting an even more sacred duty.

“We are against the regime that ruled us for 30 years, robbed us and blew us up,” said the 32-year-old, a spokesperson for the families of blast victims.

Opposition parties, many of which emanated from the now-defunct protest movement supporting secular and democratic change, have struggled to mount a united challenge but could secure a stronger voice in parliament nonetheless. 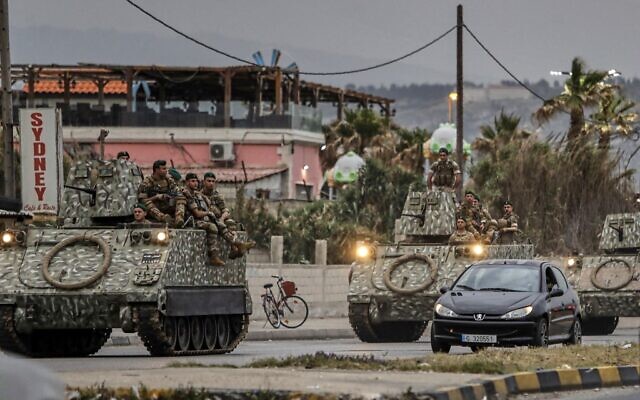 Lebanese army vehicles patrol along a road in the northern city of Tripoli on May 14, 2022, on the eve of parliamentary elections. (Ibrahim CHALHOUB / AFP)

“The elections are an opportunity to change the system and hold it accountable in a way that makes this country liveable,” Vodolian said.

Top political barons have stalled an investigation into the explosion — two of the main suspects are even running for a seat — and legal proceedings against the Central Bank governor over financial crimes are equally floundering.

One of the most notable changes in the electoral landscape is the absence of former prime minister Saad Hariri, which leaves parts of the Sunni vote up for grabs by new players.