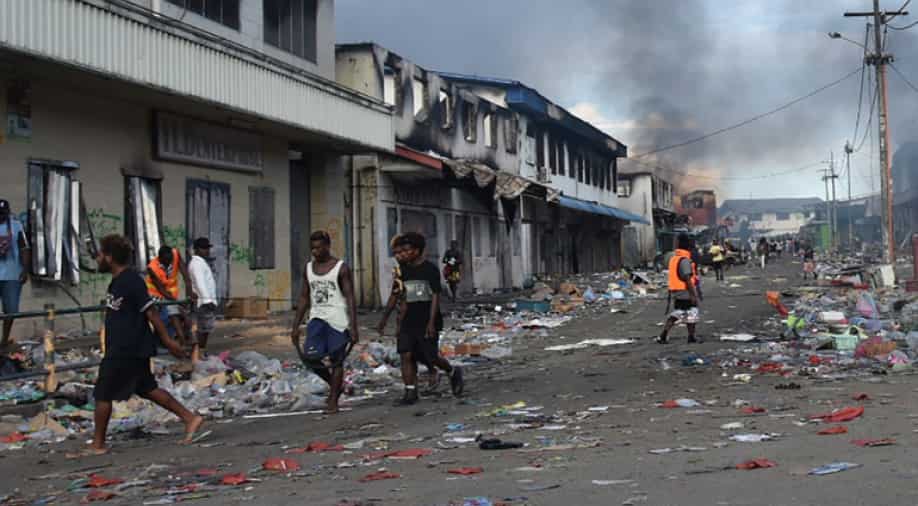 Leaked documents have revealed the Chinese embassy in the Solomon Islands has requested for a heavily armed security team to be sent to the islands after riots broke out in Honiara.

The embassy said in a statement, “The government of the Peoples Republic of China has decided to send a plain-clothes security team, 10 personnel, with necessary light weapons and equipment to the Chinese embassy in the Solomon Islands.”

The “official status” of the security team was “diplomatic attaches” that would “enhance the safety and security of the Chinese embassy,” as per a leaked memo obtained by the Guardian.

Solomon Islands diplomat Colin Beck wrote a memo saying the request made by the Chinese embassy “stemmed from the recent three days of November riots, of which the Solomon Islands Chinese community faced the brunt of the looting and violence amongst other business owners”.

“My ministry, during the period, could not guarantee the safety of the embassy and [its] staff. As host country, we had an obligation to protect all embassies including [the] Chinese embassy,” the memo said. “In this regard, we have no objection to the request.”

Confirming the veracity of the documents, the Solomon Islands government said, “to be alert against fake news or misinterpreted commentaries on social media forums following leaked documents containing official correspondences between the Solomon Islands Government and the People’s Republic of China (PRC) Embassy in Honiara.”

After a regional backlash, the Solomon Islands said it would not allow a Chinese military base in the Pacific islands nation despite its plans to sign a security pact with Beijing.

Solomon Islands Prime Minister Manasseh Sogavare said, “Government is conscious of the security ramification of hosting a military base, and it will not be careless to allow such initiative to take place under its watch.”

“The point of the security cooperation between China and the Solomon Islands is to maintain the safety of people’s lives and property. It is without any military elements or overtones,” said China’s foreign ministry spokesperson, Zhao Lijian.

Australian Minister for International Development and the Pacific Zed Seselja said his country “stood strongly as a partner and a friend of Solomon Islands” and it believed “the Pacific family will continue to meet the security needs of our region.”