The head of the Yad Vashem Holocaust memorial called the remarks a “blood libel”; Foreign Minister Yair Lapid said the comments were “unforgivable and scandalous”; and Israel summoned Russia’s ambassador for clarification.

Lavrov made the claim on Sunday in an interview with Italian television, arguing that the fact that Ukraine’s president Volodymyr Zelensky is Jewish does not contradict Moscow’s claims that it had launched its invasion of the country to “de- Nazify” it.

The stubbornly persistent — and dangerous — idea of  Nazi leader Adolf Hitler having Jewish ancestry dates back as far as the 1920s, focusing on the origins of Hitler’s paternal grandfather.

Hitler’s father, Alois, was born in 1837, the illegitimate child of 42-year-old Maria Anna Schicklgruber. No father is recorded on his baptism certificate, which became the source of the speculation that Hitler’s grandfather was actually Jewish.

“Rumours to that effect circulated in Munich cafes in the early 1920s, and were fostered by sensationalist journalism of the foreign press during the 1930s,” wrote Ian Kershaw in his biography, “Hitler.”

Wild speculation abounded, including that Alois’s parentage could be traced to a Jewish family in Bucharest named Hitler, or that the fabulously wealthy Baron Rothschild sired Alois when his mother was working as a servant in the Rothschild mansion in Vienna. 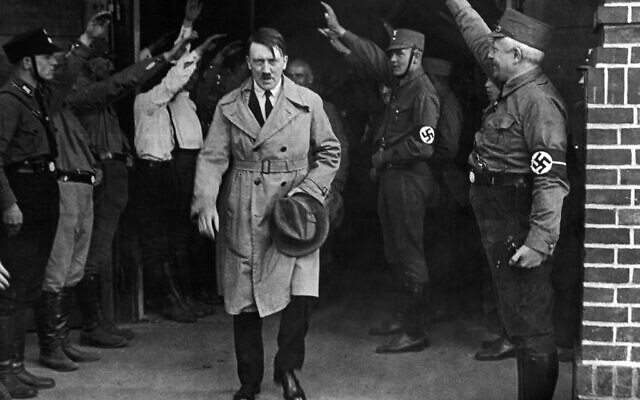 In this Dec. 5, 1931 photo, Adolf Hitler, leader of the National Socialists, is saluted as he leaves the party’s Munich headquarters (AP Photo, File)

The theory was encouraged by Hitler’s political rivals as the Nazi leader took control of Germany in 1933.

After the Nazi defeat in World War II and Hitler’s death, a close confidant breathed new life into the rumors. Hans Frank, a leading Nazi jurist and governor-general of occupied Poland, made several dubious claims in a memoir he penned as he awaited execution at the Nuremberg gallows.

Frank claimed that in 1930, Hitler revealed to him that he was being blackmailed by his nephew William Patrick Hitler, who threatened to expose Hitler’s supposed Jewish background. Frank said he was asked by Hitler to investigate the family history, and found that Hitler’s grandmother had given birth to Alois while she was working as a cook in the Austrian home of a Jewish family in Graz, the Frankenbergers. Frank wrote that he discovered the head of the family had sent money to Hitler’s grandmother, to support the boy he believed his 19-year-old son had sired.

Hitler, according to Frank, explained to him that his father and grandmother tricked the Frankenbergers into thinking Alois was theirs because of their dire financial straits. 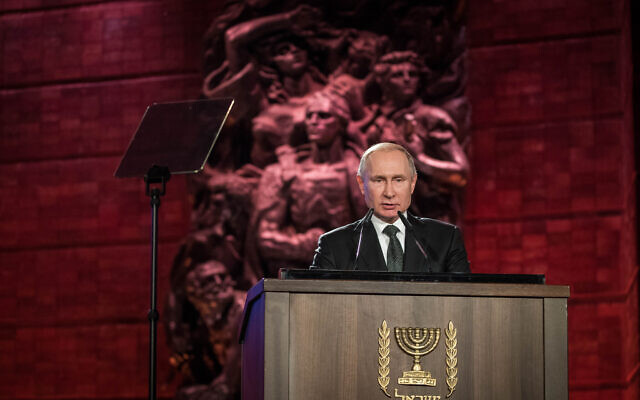 “I do not know of a single reputable scholar who takes this myth seriously,” said Sara Brown, executive director of Change, the Center for Holocaust, Human Rights & Genocide Education.

“There has not been any evidence to support the idea,” said Robert Rozett, senior historian at the International Institute for Holocaust Research at Yad Vashem. “In the last few decades of research, important biographies have come out that have shown this.”

Kershaw says there was no Jewish Frankenberger family in Graz in the 1830s — indeed, no Jews were permitted to live there at all at the time. Nor is there any evidence that Hitler’s grandmother ever set foot in Graz. 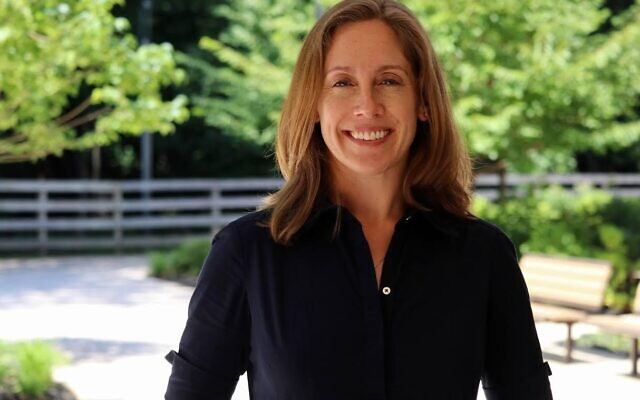 “Hans Frank’s memoirs, dictated at a time when he was waiting for the hangman and plainly undergoing a psychological crisis, are full of inaccuracies and have to be used with caution,” according to Kershaw. “With regard to the story of Hitler’s alleged Jewish grandfather, they are valueless. Hitler’s grandfather, whoever he was, was not a Jew from Graz.”

Brown said that the myth has lasted because “antisemitism did not end in 1945.”

“And resulting Holocaust denial, even blaming Jews for their own suffering and that of millions more during World War II, is a convenient way to distract from the crimes perpetrated by the Nazis and their collaborators,” she continued. 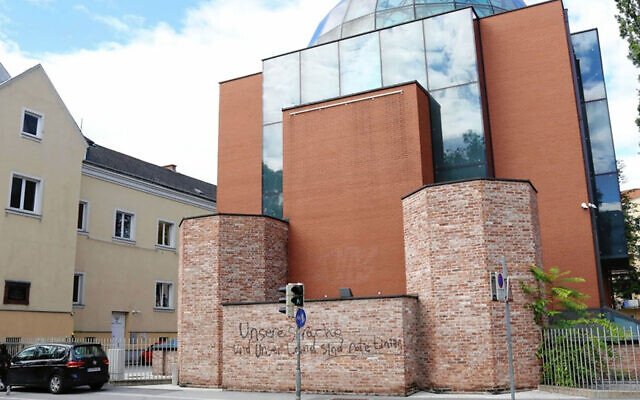 A man walks past the defaced facade of the synagogue of Graz, Austria on August 19, 2020. (Christian Jauschowetz via JTA)

The myth’s staying power, Rozett pointed out, means that many people in places like Russia have heard the rumors about Hitler’s Jewish ancestry, and are not well-informed enough to know how thoroughly debunked they have been.

Lavrov may be one of those people, he said.

Shockingly to many, Russia has refused to back down despite the backlash. On Tuesday, its Foreign Ministry doubled down on the remarks, claiming that while during the Holocaust “some Jews were forced to participate in crimes,” Zelensky, who is Jewish, “does this quite consciously and quite voluntarily.”

The statement cited “examples of cooperation between Jews and the Nazis” during the Holocaust, noting the Judenrat councils formed in many Jewish communities and those who ran them, “some of whom are remembered for absolutely monstrous deeds.” 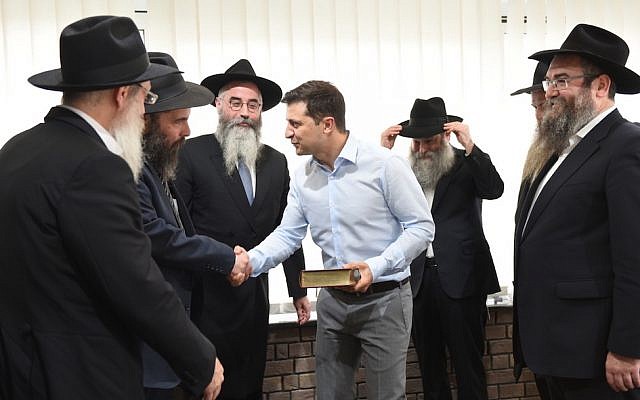 Vlodymyr Zelensky, Ukraine’s newly elected Jewish president, meets with rabbis in Kyiv in early May 2019. (Courtesy of the Jewish Community of Dnepro/ via JTA)

Rozett explained that there was a certain logic to Russian leaders, including President Vladimir Putin, pushing the narrative that Zelensky and the Ukrainian leadership are modern-day Nazis.

“For Russia, the fight against Nazi Germany in World War II continues to be a touchstone for Russian identity,” he said.

“‘We are now fighting an enemy that is similar to that which we vanquished in World War II,’” he explained of Russians’ thinking.

But there are also far more dangerous implications to Lavrov’s rhetoric.

If Hitler had been Jewish, and if Jews cooperated with Nazis, goes the trope, then Jews are responsible for their own suffering and, in many ways, that of all of Europe. 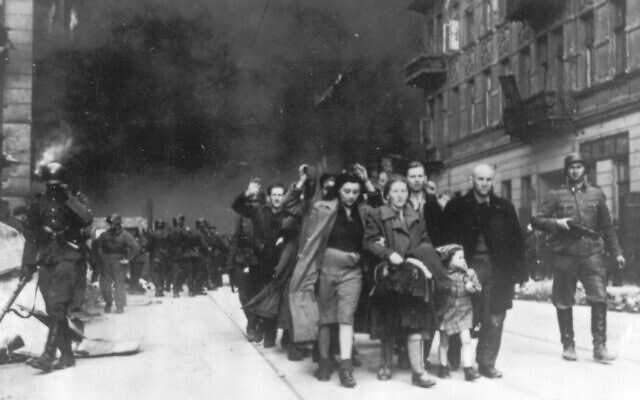 A group of Polish Jews are led away for deportation by German SS soldiers, during the destruction of the Warsaw Ghetto by German troops after an uprising in the Jewish quarter, in 1943. (AP Photo)

“The idea is dangerous because of its logical conclusion,” said Brown. “That would mean that a Jewish individual was the architect of the mass murder of six million Jews and millions more.”

Zelensky’s chief of staff may have been alluding to this pernicious idea on Tuesday when he responded to Lavrov’s comments. “It showed again that Russia poses an existential threat not only to Ukraine, with at least 100,000 Jews, but to all Jewish people around the world,” Andriy Yermak told The Times of Israel.

“As an educator who regularly deals with antisemitism in school settings,” Brown added, “the foreign minister’s quote does me no favors. It only makes my work harder.”