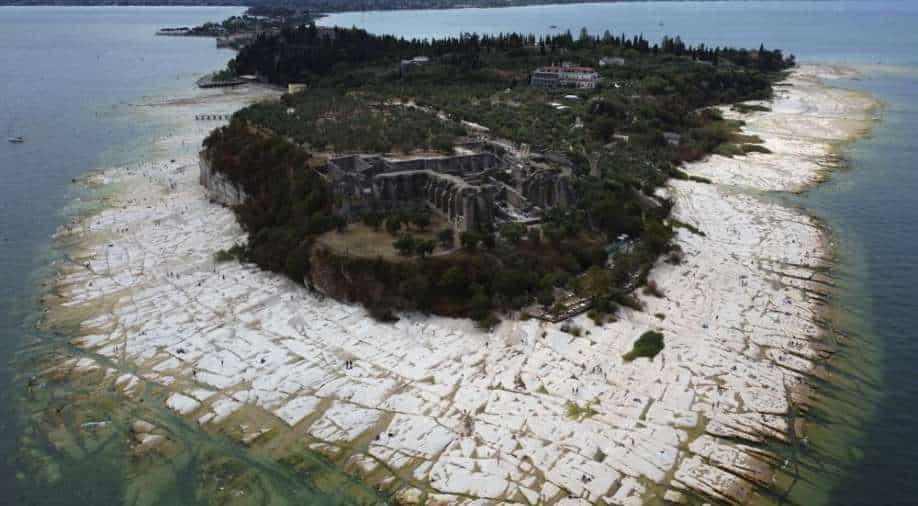 The largest lake in Italy, Lake Garda, has been reduced to nearly its lowest level ever recorded as a result of the worst drought experienced in decades. This has exposed large areas of previously submerged rocks and caused the water to warm to temperatures that are similar to those of the Caribbean Sea.

For the start of Italy’s important summer long weekend, tourists flocked to the well-known northern lake on Friday, but they discovered a very different landscape than in previous years.

Beyond the typical shoreline, a long length of bleached rock surrounded the southern Sirmione Peninsula with a yellow halo in contrast to the water’s green tint and the shore’s greenery.

We came last year, we liked it, and we came back this year,” tourist Beatrice Masi said as she sat on the rocks. “We found the landscape had changed a lot. We were a bit shocked when we arrived because we had our usual walk around, and the water wasn’t there.”

Important rivers like the Po, which runs through Italy’s agricultural and industrial core, have dried up as a result of months without any major rainfall in northern Italy and a 70% decrease in snowfall this year. This summer, droughts have affected farmers and shippers in numerous European nations, including Spain, Germany, Portugal, France, the Netherlands, and Britain. As a result, water use has been restricted in many of these nations.

Farmers who typically use the Po to irrigate fields and rice paddies have already lost billions of euros as a result of the river’s dry condition.

The lake was 32 centimetres above the water table on Friday, close to the record lows in 2003 and 2007. Rivers were receiving 45 cubic metres of water each second.

Garda Mayor Davide Bedinelli stated that he had to defend both the agricultural sector and the tourism sector. Despite cancellations, especially from German tourists, during Italy’s most recent heat wave in late July, he asserted that the summer tourism season was performing better than anticipated

“Drought is a fact that we have to deal with this year, but the tourist season is in no danger,” Bendinelli wrote in a July 20 Facebook post.

He verified that there was a daily water loss of two millimetres from the lake.

According to seatemperature.org, the lake’s temperature has been higher than usual for August. On Friday, the water temperature in the Garda reached close to 26 degrees Celsius (78 degrees Fahrenheit), which is significantly higher than the usual August temperature of 22°C and almost equal to the average of roughly 27°C for the Caribbean Sea.