Israel’s Ambassador to the UN Gilad Erdan pilloried Palestinian Authority President Mahmoud Abbas Friday for his “bizarre, lie-laden speech” to the UN General Assembly, which he called “disconnected from reality.”

Erdan said Abbas had “once again showed that his time has passed” through his address. “Time after time he uses the stage of the UN to incite against Israel and back the terrorists whom he funds.”

Erdan said the Palestinian effort to gain full membership in the UN “will fail.”

“The US opposes it, as do members of the Security Council who well know that [Abbas] has in the past rejected every peace plan, and that terror organizations rule PA territory.”

Abbas said in his speech that Israel was “through its premeditated and deliberate policies, destroying the two-state solution,” that Jerusalem was proving that it does not “believe in peace” and that “we no longer have an Israeli partner to whom we can talk.”

He also called the Jewish state “an apartheid regime.”

Abbas did acknowledge Prime Minister Yair Lapid’s speech to the Assembly the previous day, in which he voiced support for a two-state solution.

This, Abbas said, was “a positive development,” but “the real test to the seriousness and credibility to this stance… is for the Israeli government to go back to the negotiation table immediately.” 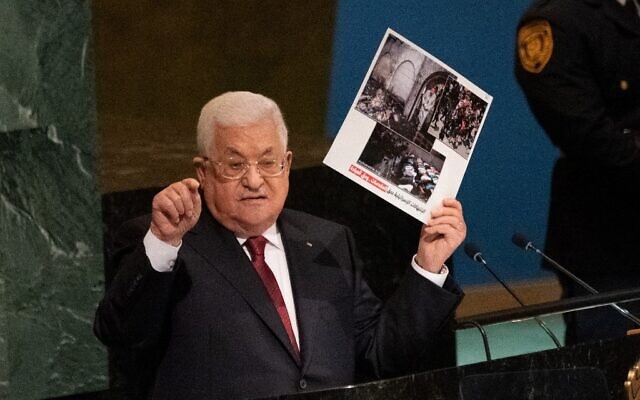 Palestinian Authority President Mahmoud Abbas holds up a graphic as he addresses the 77th session of the United Nations General Assembly at UN headquarters in New York on September 23, 2022. (Bryan R. Smith/AFP)

Noting those latter comments, the leader of Israel’s left-wing Meretz party reacted to the speech positively, saying it showed that “there is an opening for peace.”

“Lapid opened it yesterday and [Abbas] is timidly extending his own hand,” Zehava Galon argued.

“The Israeli-Palestinian conflict is not a predetermined fate. The cycle of blood can end and it depends first and foremost on brave leadership on our side,” she said, calling on Lapid to “take the next brave step and meet with [Abbas].” 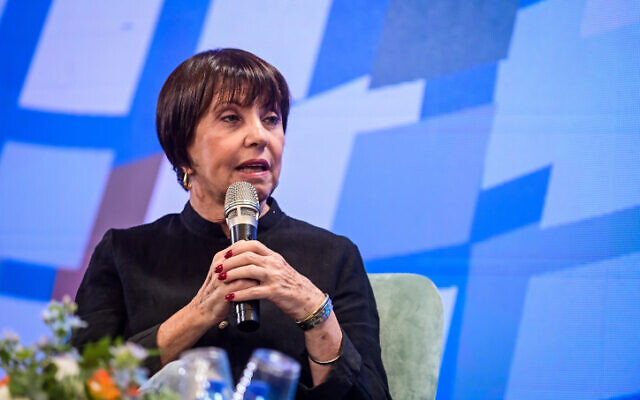 Lapid has been heavily criticized by the Israeli right for backing two states.

In a statement released while Lapid was delivering his address, opposition leader Benjamin Netanyahu accused the premier of “bringing the Palestinians back to the forefront of the world stage and putting Israel right into the Palestinian pit.”

However, the prime minister’s comments drew widespread praise from Lapid’s centrist and left-wing allies, as well as US President Joe Biden and Ambassador to Israel Tom Nides, who both called the speech “courageous.”