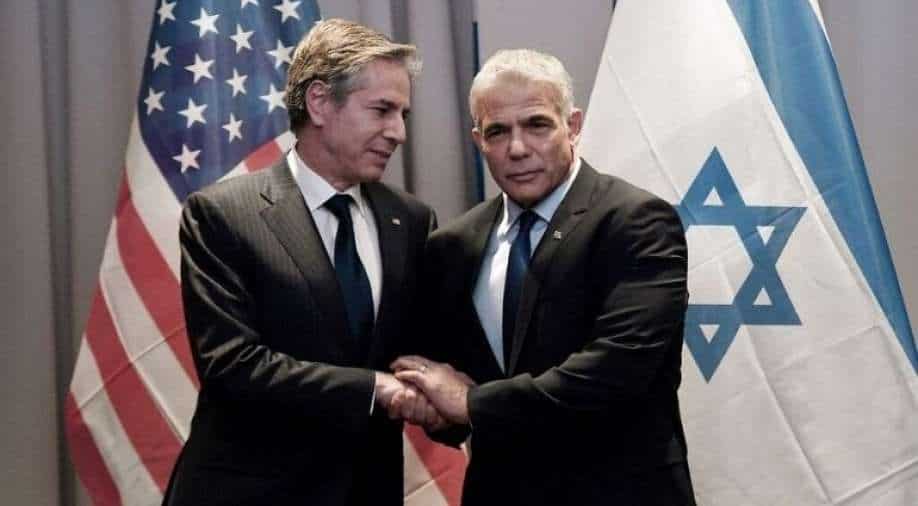 Israel and the United States will cooperate in preventing a nuclear-armed Iran despite disagreements they have over an emerging nuclear deal, Israel’s foreign minister said on Sunday.

“We have disagreements about a nuclear agreement and its consequences, but open and honest dialogue is part of the strength of our friendship,” Yair Lapid said in Jerusalem during a joint press conference with visiting US Secretary of State Antony Blinken.

“Israel and the United States will continue to work together to prevent a nuclear Iran.”

Speaking alongside his Israeli counterpart Yair Lapid, Blinken said the US believes restoring the agreement was “the best way to put Iran’s programme back in the box that it was in but has escaped” after the US withdrew from the deal under former president Donald Trump in 2018.

Despite long-standing disagreements with Israel over the nuclear deal, known as the Joint Comprehensive Plan of Action, Blinken stressed that “when it comes to the most important element, we see eye-to-eye”.

“We are both committed, both determined, that Iran will never acquire a nuclear weapon.”

Iran insists its nuclear programme is for civilian use only.

Lapid said Israel had “disagreements” with Washington about the Iranian nuclear issue, which it was airing with its key ally in “open and honest dialogue”.

“Israel will do anything we believe is needed to stop the Iranian nuclear programme. Anything,” Lapid said.

“From our point of view, the Iranian threat is not theoretical. The Iranians want to destroy Israel. They will not succeed. We will not let them.”

Blinken’s trip was rescheduled several times due to developments in Ukraine, and he arrived late Saturday in Israel from Warsaw after breaking off from President Joe Biden’s Ukraine-dominated visit to Belgium and Poland.

Blinken’s visit also comes as talks over salvaging a landmark nuclear deal with Iran are winding down amid fears in Israel and among Gulf Arab nations that an agreement may not be tough enough to curb Tehran’s regional aggressiveness.

Israel fiercely opposed the initial accord, which promised its enemy Iran sanctions relief in return for curbs on its nuclear programme, and has said that a revived agreement will not do nearly enough to curb the Iranian threat.

Underscoring regional anxieties, Israel’s government has hastily arranged a meeting of top diplomats from Arab countries that have normalized relations with Israel.

In addition to Blinken and Israeli Foreign Minister Yair Lapid, their counterparts from Bahrain, Morocco and the United Arab Emirates will attend.

Those three countries normalised relations with Israel in 2020 in the so-called Abraham Accords brokered by the Trump administration.