Senior diplomats from Israel, the US, and regional Arab allies agreed to increase efforts to improve security, stability and prosperity in the Middle East during a Negev Summit follow-up meeting in Bahrain on Monday.

The first meeting of the Negev Summit Steering Committee — consisting of Israel, Bahrain, the UAE, Egypt, Morocco, and the US — is “especially important in light of US President Joe Biden’s expected visit in Israel and Saudi Arabia, and America’s commitments to widen the circle of peace,” the Foreign Ministry said in a statement after the meeting.

Biden is slated to visit Israel, the West Bank and Saudi Arabia on July 13-16.

“It was an important milestone,” an Israeli diplomatic official said on Monday.

“It is part of an ongoing effort to build what we like to call a regional architecture, which is both military and civilian in its character, with a meaningful American presence,” he said.

The meeting in Bahrain’s capital was designed to turn the March Negev Summit into a permanent forum for regional cooperation. 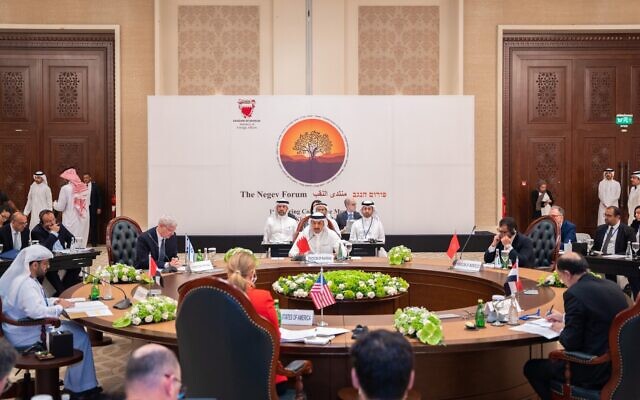 A major Israeli achievement was having the name Negev Forum formalized, the first time a major multilateral initiative was named after a place in Israel.

“It was achieved with no difficulty and with no comments, as if it was a given,” said the official.

In Manama, the representatives of the six countries created a core document that lays out the goals of the forum, what each working group will deal with and who will lead them. That document must be approved by the six countries before being released.

The working groups set up during the summit address regional security, food and water security, energy, health, education and tolerance, and tourism. Each of the six Negev summit countries will head one of the working groups, which will meet two or three times a year.

Working groups are empowered to invite guests from countries that are not part of the Negev Forum. 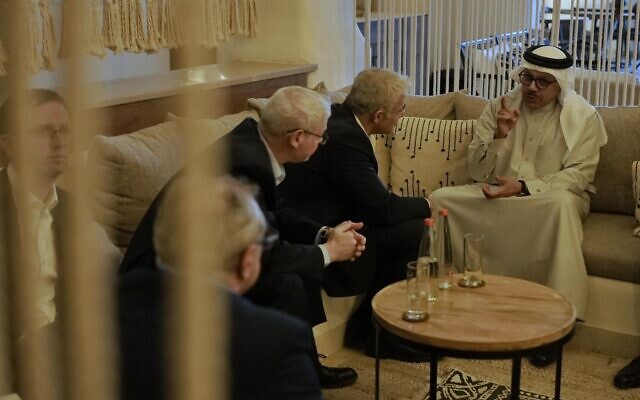 The next steering committee meeting will take place in Israel ahead of the second meeting of the six foreign ministers. An agreement has been reached regarding the location of the foreign ministers’ meeting, but the countries want to keep that information under wraps for now, said the official. It will not be in Israel this time.

The steering committee also discussed the mechanism for inviting new members, but did not decide which countries would be invited to the next meeting.

Israel’s Foreign Ministry delegation, which took off on Sunday for Bahrain, was headed by Director-General Alon Ushpiz.

Deputy Assistant Secretary of State for Near Eastern Affairs Yael Lempert led the US delegation.

In late March, Israel hosted an unprecedented summit of regional leaders in the Negev town of Sde Boker, where they announced that the gathering would be the first iteration of a permanent regional forum.

“We see in this meeting the potential to formulate the regional architecture a bit ahead of time,” said Oded Joseph, head of the Foreign Ministry’s Middle East desk, on Sunday.

“The presence of the American delegation will be very important, as well as the arrival of President Biden to this region, and specifically his visit to Israel, from our view, will be an important part of what has been taking shape in the region for the past year and a half.”

“We are working, in the space that is not in the public domain, with a couple of other countries. And I think you’ll see some interesting things around the time of the president’s visit,” US Assistant Secretary of State for Near Eastern Affairs Barbara Leaf told a congressional subcommittee. 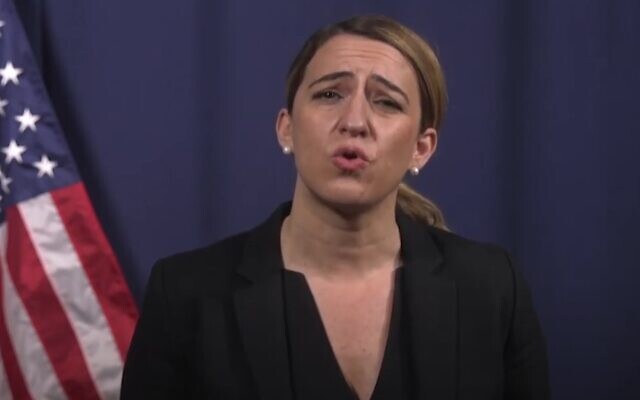 One of the topics of Monday’s Manama meeting would be regional security, said Joseph. “Many of the things that have been done, including in the years we didn’t have these diplomatic relations and things were done quietly, were done bilaterally. What we’re trying to do now with the Negev Forum is trying to create a situation in which there are multilateral activities on this issue.”

An official close to Foreign Minister Yair Lapid said during the March summit that Lapid and his Arab counterparts were discussing “advancing a regional security architecture.” The regional architecture will deal with threats by “air, sea, and piracy,” the official said.

“We’re trying to build a new regional framework… and tangible initiatives that can put flesh on the bones of the Negev forum,” said Lempert.

A joint statement also expressed the group’s support for a negotiated settlement to the Palestinian-Israeli conflict.

“It’s a very holistic approach, towards trying to advance this goal of building a new architecture that really has meaningful results,” Lempert told reporters.

AFP contributed to this report.