Defense Minister Benny Gantz on Monday wrapped up an official visit to Azerbaijan, where he met with the country’s President Ilham Aliyev and his Azeri counterpart, Zakir Hasanov.

Gantz’s visit focused on security and policy issues, with the aim of fostering defense cooperation between Jerusalem and Baku, according to his office.

Gantz used his visit to “emphasize the importance of maintaining strategic relations between the State of Israel and the Republic of Azerbaijan,” and “reflected on the changes in the Middle East region following the signing of the Abraham Accords,” a statement from his office said.

He and officials in Azerbaijan also “discussed Israel’s developing ties with Turkey and additional countries in the region and the world.”

The defense minister’s visit comes just two weeks after the latest round of fighting between Azerbaijan and its neighbor Armenia, over the disputed Nagorno-Karabakh region. 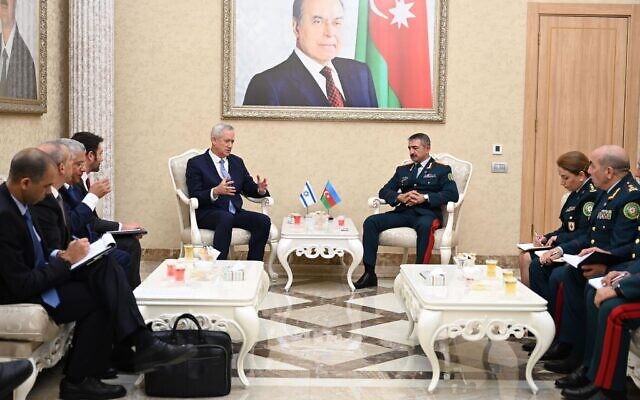 In 2020, the neighboring countries fought a six-week long war that claimed the lives of more than 6,000 soldiers and resulted in Azerbaijan conquering some of the disputed territories, prior to a Russian-brokered peace ceasefire.

Israel has large weapons deals with Azerbaijan, however, it does not disclose details of the agreements.

In 2016, Aliyev said his country had bought $4.85 billion in defense equipment from the Jewish state, but Israel has never confirmed that figure.