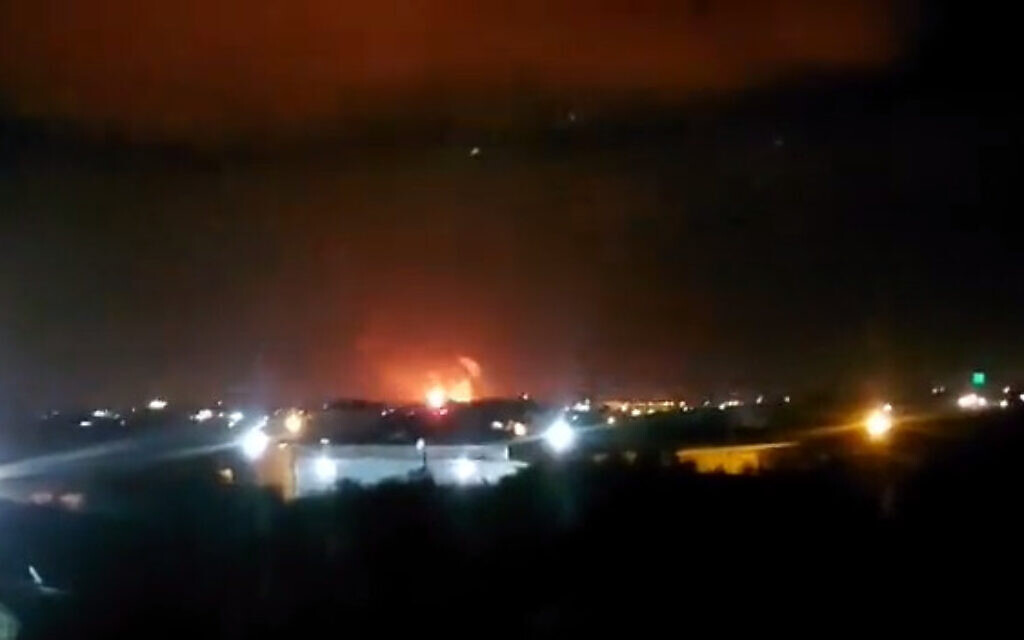 Gaza terror groups fired two rounds of rockets at southern Israel late Wednesday and early Thursday, with each drawing a separate IDF response in what amounted to the largest exchange of fire since last May’s 11-day war.

The first launch from Gaza came at around 10:30 p.m., with shrapnel from the rocket striking a parked car and a wall near a home in the city of Sderot. Hundreds of ball bearings that were loaded into the rocket were found at the scene.

Less than three hours later, the IDF said it responded with airstrikes in central Gaza targeting a military post as well as a tunnel complex “containing raw chemicals used for the manufacturing of rocket engines.” The IDF claimed its strike marked a significant blow to the rocket production process in Gaza.

For the second time this week, the IDF said that Hamas targeted its jets with anti-aircraft missiles during the raid.

Shortly after 2:00 a.m., Gaza terrorists launched a second salvo of rockets — this time consisting of more than one projectile.

The Iron Dome missile defense system managed to intercept all four rockets, according to the army.

This is Israel’s Iron Dome Aerial Defense System intercepting incoming rockets fired just now by terrorists in Gaza at the homes of innocent Israeli families who had hoped to sleep peacefully tonight.

All the rockets were successfully intercepted. pic.twitter.com/03mjTlQMDv

The salvo was followed by additional Red Alert sirens in Gaza border towns, which the IDF later said were triggered by gunfire — consistent with earlier Palestinian media reports on gunmen in the Strip shooting at Israeli aircrafts.

The army said it responded to the rocket salvo as well as the earlier anti-aircraft missile fire by striking a compound used by Hamas’s air defense force.

No Israelis were directly injured by the rocket fire, but two people were lightly wounded in falls that took place while running to bomb shelters. Both were evacuated to nearby hospitals for further treatment, according to the Magen David Adom ambulance service.

No Gaza group immediately took responsibility for either of the night’s launches, as had been the case after the week’s first rocket launch on Monday evening. However, several media reports citing Israeli security officials pegged Hamas-rival Palestinian Islamic Jihad as responsible for the Monday rocket fire.

Regardless, the IDF responded to the week’s first rocket launch with an air raid targeting a number of Hamas military sites in Gaza, including one used by Hamas to manufacture weapons.

The army said in its early Thursday statement that it holds Hamas responsible for what takes place in the Gaza Strip, sticking to its long-held justification for targeting posts belonging to the enclave-ruling group in response to rocket fire, regardless of whether its fighters were behind the launches or not.

Hamas spokesperson Hazem Qasim said early Thursday that “the bombing of Gaza will increase the persistence of our people and its resistance to continue the struggle and escalate support and aid for our people in Jerusalem.”

This week’s rocket attacks ended an almost four-month period of quiet on the Gaza border. Wednesday’s rocket fire came at the tail-end of a tension-filled day in Jerusalem, where Israeli nationalists were prevented by police from marching through the Old City’s Damascus Gate, a popular gathering point for Palestinians in East Jerusalem. Hamas had threatened to attack if the march went ahead.

Recent days have seen violent clashes between Palestinian rioters and police on the Temple Mount in Jerusalem, leading to the injury of dozens of Palestinians and several police officers.

Hamas and other Gaza-based terror groups have repeatedly invoked the flashpoint holy site as a red line. Police actions to quell riots there last year were among the triggers of an 11-day war in Gaza last May.

Aaron Boxerman contributed to this report