The Israel Defense Forces on Friday suspended two soldiers who physically assaulted and taunted left-wing activists in Hebron, the latest in a series of incidents involving the Givati infantry brigade in the flashpoint West Bank city.

In footage shared by Breaking the Silence, a non-governmental organization that collects and publicizes mostly anonymous testimony by former Israeli combat soldiers about alleged human rights violations against Palestinians, one soldier can be seen tackling an activist to the ground and punching him in the face.

The group of activists had traveled to Hebron to meet with local Palestinian families as an act of solidarity after Israelis visiting the city in an annual pilgrimage initiated clashes with them last week.

In the footage, troops were seen attempting to detain the man, who flees, before he was knocked to the ground and punched. Another soldier is heard shouting at the other activists: “Get the fuck out of here.”

The assaulted guide was subsequently interrogated by Israeli police for allegedly assaulting a soldier and preventing him from carrying out his duties, his lawyer told the Ynet news site, adding that his client was still being held, despite his injuries. Two other activists were also detained briefly for unclear reasons, the lawyer said. Footage from the scene did not show an assault on the part of the activists.

In a separate video from the scene, a soldier from the same squad was seen confronting an activist and boasting about far-right lawmaker Itamar Ben Gvir, who is set to become Israel’s next national security minister — an expanded public security minister role.

“Ben Gvir is going to sort things out in this place,” the soldier says. “That’s it, you guys have lost … the fun is over,” he added.

Asked by the filming activist, “Why? Am I doing something illegal?” the soldier replies, “Everything you do is illegal. I am the law,” and orders the activist to step back.

“We can already see the effects of Ben Gvir’s appointment on the ground,” read a subsequent statement issued by Breaking the Silence.

The soldier was wearing a patch velcroed to the back of his military vest that read, “One shot. One kill. No remorse. I decide.” Patches other than those showing the logo of a military unit or an Israeli flag are against military regulations.

The Israel Defense Forces in a statement said the incidents would be investigated by the commander of the Central Command, Maj. Gen. Yehuda Fuchs.

“The soldiers involved were suspended from operational activity until the end of the investigation,” the IDF said.

Military chief Aviv Kohavi condemned the soldiers’ actions, saying they were “extremely serious and contrary to the values of the IDF.”

The activists said they were in Hebron to meet with Palestinians as a sign of solidarity following last week’s violent clashes in the city. At least two Palestinians and one soldier were hurt in those clashes last Saturday. They came as thousands of Jewish Israelis spent the weekend in the city for an annual pilgrimage.

Last week the IDF suspended a soldier after he cursed a Breaking the Silence activist. “You’re a traitor to the country and you’re a son of a whore, son of a bitch. I wish you get cancer all over your body,” the soldier said.

Breaking the Silence runs regular tours through Hebron, highlighting what the group believes to be the negative ramifications of Israel’s military control of the flashpoint city on its Palestinian population. The tours often evoke anger from the hardline Jewish settlers living in Hebron — as well as the IDF soldiers defending them — who argue that Breaking the Silence falsely presents the reality of the divided city. 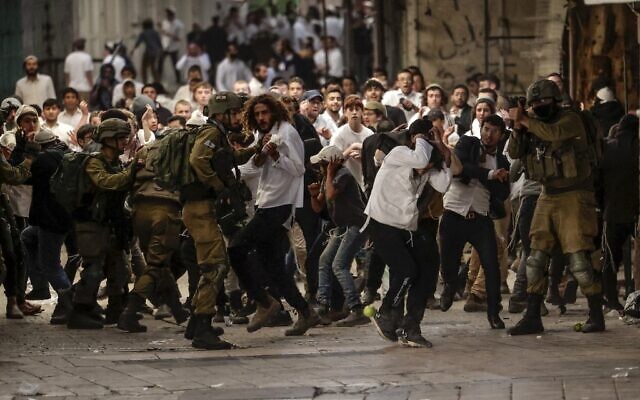 Israeli security forces deploy riot dispersal means amid altercations between Israelis and Palestinians, on their way to visit the tomb of Othniel in the West Bank city of Hebron, on November 19, 2022 (HAZEM BADER / AFP)

Another three troops of the brigade were suspended last month over an assault on a Palestinian man. That case was being investigated by the Military Police and was also condemned by IDF chief Aviv Kohavi.

The West Bank has been on edge over the past year, with the IDF launching a major anti-terror offensive mostly focused on the northern West Bank to deal with a series of Palestinian attacks that have left 30 people in Israel and the West Bank dead since the start of the year. Hebron is in the southern part of the territory.

The operation has netted more than 2,000 arrests in near-nightly raids, but has also left around 150 Palestinians dead, many of them — but not all — while carrying out attacks or during clashes with security forces.

At the same time, there has been a steep rise in settler attacks against Palestinians and security forces.