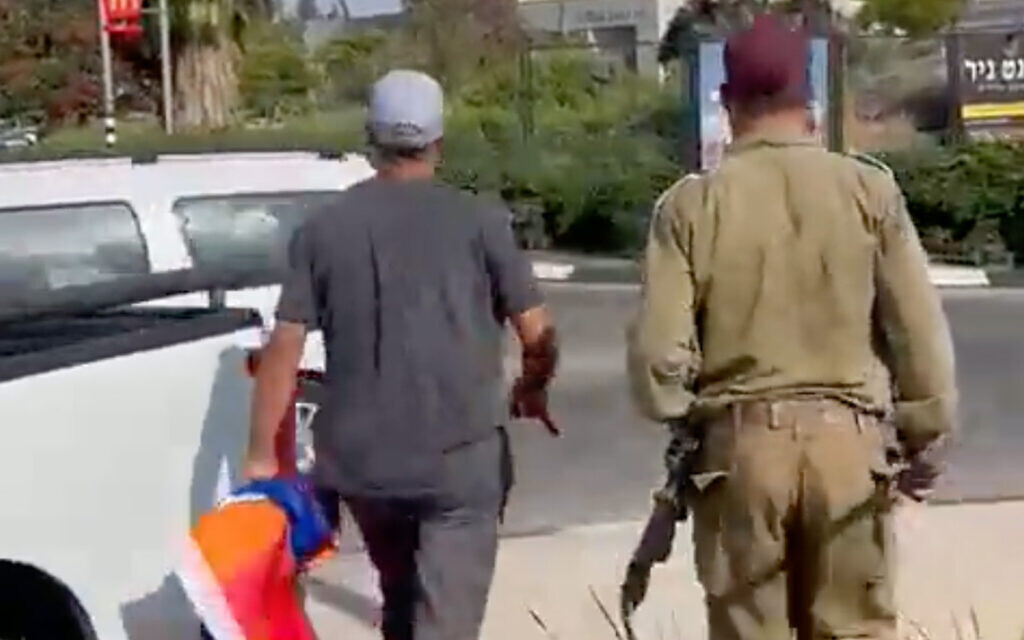 An unidentified man in an Israel Defense Forces uniform and another individual were filmed Thursday removing a gay pride flag that was put up by local authorities in northern Israel.

In a video of the incident, the two can be seen walking away with the flag, which was hung by the Emek Hayarden Regional Council, and refusing to respond to a man who asks for their identities.

The man in the IDF uniform, who the military said it had not identified, appeared to be an officer and was carrying an M-16 rifle in a video posted by a local Channel 12 reporter. It was not clear if he was a commissioned officer or reservist, or what unit he served in. The other man was in civilian attire.

“The behavior of the officer in the video does not reflect the IDF’s values. The matter will be examined and dealt with,” the military said.

The flag was removed just hours after the Emek Hayarden Regional Council raised it on the flagpole in a shopping center at the Tzemach Intersection, near the southern tip of the Sea of Galilee. The council said it was the second time Thursday that the flag was taken down.

“The pair not only removed the flag but also sabotaged the flagpole,” the council said in a statement.

The council urged the IDF to investigate the soldier, who it noted made no apparent effort to conceal his face, and said it had filed a police complaint.

The Aguda Association for LGBT Equality also called on the military to launch a probe of the soldier.

“LGBT-phobia cannot be part of the IDF’s values. The fact that this act of vandalism was done by an officer in uniform shows how severe the loss of values is,” the group said.

The incident came during Gay Pride Month, which has been marked in Israel with marches and other events.