JTA — On the wall of Adam Henry’s childhood bedroom in Fort Myers, Florida, hangs a gold medal from the 2017 Maccabiah Games, the international sports tournament often nicknamed the Jewish Olympics.

Adam, now a 20-year-old goalie playing Division I soccer at the University of Missouri, Kansas City, has been a devoted athlete his entire life. But he didn’t play during those 2017 Maccabiah Games. It’s a long and tragic story that includes multiple injuries and the sudden death of Adam’s mother — but it ends with tears of joy.

In the winter of 2017, Adam tried out for the Maccabi USA junior soccer team and was chosen as a likely captain. He had been living two hours away from home, on the east coast of Florida, where he was training at the IMG Academy, an athletic training program and boarding school with an impressive slate of alumni, from tennis legend Andre Agassi to baseball star Gary Sheffield. Adam cycled between living alone, staying with his mother, Judy, and living with a host family.

“I remember I was actually napping, I had just come back from practice and my mom came running in overjoyed, saying I made the [Maccabi] team,” Adam recalled in an interview with the Jewish Telegraphic Agency. “It was definitely one of the closest moments I’ve ever had with my mom. It was just filled with joy and excitement, anticipation, getting ready to represent my country at the Jewish national level.”

Growing up in an area with a small Jewish population — far from Floridian Jewish epicenters like Boca Raton and Miami — he said playing in the Games had been a dream of his, and he looked forward to meeting other Jewish athletes.

“When he made that team, it was a confirmation that, wow, he had something pretty special,” Adam’s father Kevin said.

It also meant a lot to Judy Henry, a former Division I tennis player with a lot of family in Israel. Like her son, she enjoyed a good competition.

The joy of being selected for the Maccabiah Games unfortunately did not last.

Adam had grown about eight inches in one year, and during a game just weeks before he and his family were scheduled to head to Israel, Adam fractured the growth plate in his left leg. He had to wear a full leg cast for two months, and even now, he still feels the repercussions of the injury: His feet are two very different sizes. 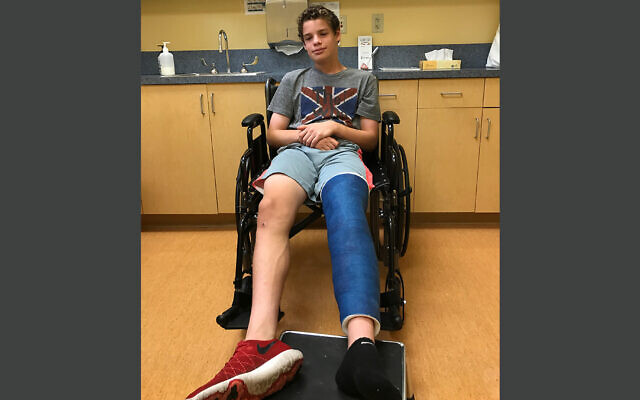 Despite not being able to compete with the Maccabi USA team, Adam and his family decided to go to Israel for the Games, so he could cheer on his teammates. The team would ultimately win the gold medal with Adam watching from the stands.

After the tournament ended, Adam’s father and his sister Rebecca departed, while he and his mother stayed in Israel.

Judy had chronic health issues, Kevin explained, including psoriatic arthritis and a capillary condition that caused recurring bleeding in her feet. Though the bleeding could be significant at times, the issue was not thought to be life-threatening.

While staying near the Dead Sea, Adam and his mother walked along the beach to check out a spa. Judy experienced a bleeding episode and decided to return to their hotel. Adam continued on to the spa.

When Adam made it back to their hotel room, his mother was not there.

He retraced their steps, and found a crowd of people surrounding his mother, who had collapsed and died.

While the official cause of death is unknown, as the family decided not to have an autopsy done, Kevin suspects the combination of dehydration, summer heat and multiple bleeding episodes Judy had experienced, which could have caused an embolism. She died five years ago this week.

Only 15 years old, Adam was alone in Israel. The experience took a toll on his athletics, and on his faith.

“I questioned God, I guess,” he said. “I was a 15-year-old boy who kind of saw my mom bleed out. It really made me think, what is that type of God?”

But with time, Adam said, he began to believe that everything happens for a reason. And ultimately, he leaned in even closer to his Judaism.

“It brought me closer to all the Jews around me and Jewish religion itself,” he said. “The way I see Judaism is an extended large family. And it kind of gave me people to rely on.” 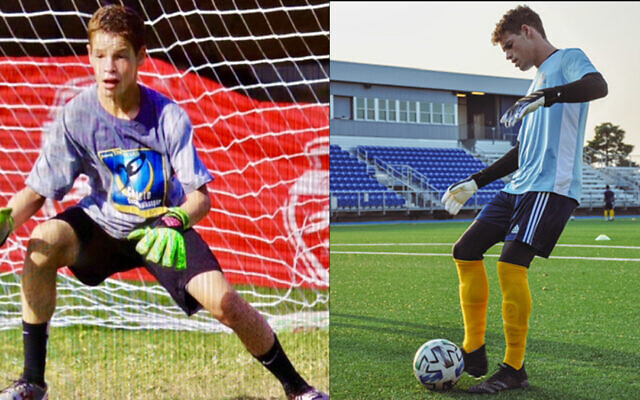 Adam also remained devoted to soccer, even though he would continue to face adversity in the years that followed. In September 2019, Adam tore his ACL, and then immediately after that healed, he tore his meniscus — all in the same leg that he had broken years earlier.

To get through it, he thought of his 8-year-old self and what it was like to step into the goal for the first time.

“I always dreamed of playing on the world stage and representing my country, like I would do in the Maccabiah Games,” he said. “Being a star, being a professional athlete, that’s kind of always what I’ve dreamed of, and that’s always something I’ve wanted to accomplish. Until someone has told me no, and until I say I fully tried every option, I’m not going to quit.”

Adam continued to play, living away from home without his friends and family throughout high school.

“It was a sacrifice that I continually asked him, does he want to continue with,” said Adam’s father. “And he said, ‘absolutely.’ So soccer has been everything for him.”

The family would eventually get some semblance of closure.

Jack Wiener, a lawyer from New York, had been family friends with the Henrys for years. He was in touch with Judy throughout the Maccabiah experience, from Adam’s tryout through the fatal Israel trip.

As a former fencer himself, Wiener had a relationship with Jeff Bukantz, the president of Maccabi USA. After Judy’s death, he decided to do something for the Henry family: He wanted Adam to receive a gold medal from the 2017 Games.

For Bukantz, it was a no-brainer.

“When Jack suggested that it would be nice to get Adam the same gold medal his team won in 2017, I said I would get that done,” he told JTA from Israel, where this year’s Maccabiah Games are underway. “I reached out to Maccabi World Union and was soon in possession of a shiny and beautiful gold medal from the 2017 Maccabiah. Jack gave me Adam’s address and into the mail it went. I’m sure Adam was thrilled to receive it, but not as happy as I was to have sent it.”

Last fall, four years after missing out on playing in Israel, Adam finally got his medal.

“I bawled my eyes out,” Adam said. “Obviously it was tears of joy that they were kind enough to give me that. And there’s a remembrance of the hard work that I put in for them to be there and the hardship that I went through. It connected me to my Jewish faith and how kind everyone has been and how they’ve really been nothing but an extended family for me, and I can’t thank them enough.”

For Adam’s father, who has since remarried, the medal took on another level of meaning.

“For me, it was what Judy wanted,” Kevin said. “His mother really wanted the medal because it was something that he had worked so hard for. And although he couldn’t contribute, she wanted him to be recognized for all the efforts that he had made up to that point, and that was a way of doing that. And so the medal, to me, is really an affirmation of my [late] wife’s desires.”

He added: “When I presented him the medal, I think he was torn. He was very appreciative of it. But at the same time, he said, ‘Dad, I didn’t earn this.’ But he said to me, ‘I know Mom would have wanted it, it was really important for Mom.’”

And as Adam prepares for next season in Kansas City, his mother remains a source of inspiration.

“I, especially in the beginning, tried to picture in my mind, okay, what would my mom do if she was here or what would she want me to do,” he said. “It just motivated me. It really made me take that extra step and really, really want to push for my goals and dreams the same way she elevated me to do that for myself.”