Skip to content
HomeWorldHeatwaves kill some 45 people in Israel every year, study finds

The Environmental Protection Ministry released a study Tuesday that looked at the connection between climate change and mortality through the rise in heatwaves.

The study examined heat waves in the country from 2012 to 2020 and analyzed mortality data in Israel. It found that each heatwave in Israel leads to the deaths of some 45 people on average, with those over the age of 70 most affected by the sudden temperature jumps.

“The climate change crisis is a real threat to health and life,” said Environmental Protection Minister Tamar Zandberg. “The study shows the impact heatwaves and the climate crisis have on excess mortality, particularly in vulnerable populations. The ministry, the state and all government bodies and local authorities must prepare for heatwaves to reduce premature mortality, suffering and medical expenses.”

Most of the mortality abnormality during heat waves was observed in adults over the age of 70, who accounted for 88.5 percent of all deaths.

The frequency, intensity and duration of heatwaves throughout the world, including in Israel, are on the rise, and the rate of increase is higher than expected so far. 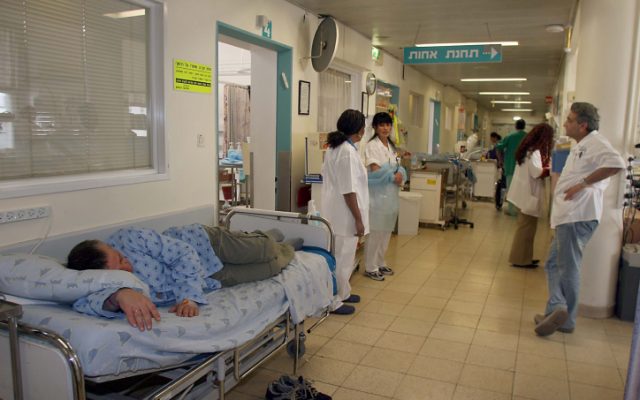 A patient waits for a room in the Sourasky Medical Center Ichilov in Tel Aviv. (Gideon Markowicz/Flash90)

The study comes after a conference held last year on climate change and public health at Ben Gurion University gathered Health Ministry officials, policymakers and researchers to discuss the increasing damage to human health as a result of heatwave events.

Dr. Tamar Berman, an environmental toxicologist from Jerusalem’s Hebrew University who works with the Health Ministry, told the online confab then that while the government had approved a decision in 2018 to prepare for climate change, as of the end of 2021, none of the relevant ministries had received any funding to carry out the necessary work.

Some progress had been made, Berman said, with the establishment of a special directorate and seven subcommittees, and steps such as the mapping of the heat-related dangers ahead.

The Environmental Protection Ministry recently sponsored Israel’s first climate bill, which was approved earlier this month by the Ministerial Committee for Legislation.

The draft legislation seeks to commit the government to cut global warming emissions by at least 27% by 2030 compared with a 2015 benchmark, and to reach net-zero by 2050.