Skip to content
HomeWorld‘God save the King!’: Charles III greets crowd as he arrives at Buckingham Palace

LONDON — King Charles III shook hands with some of the thousands of well-wishers gathered outside Buckingham Palace Friday as he returned to London following the death of his mother Queen Elizabeth II.

Shouting “God save the King” and with an impromptu burst of the reworded national anthem, members of the crowd greeted Charles and Queen Consort Camilla after they emerged from their car following a flight from Scotland.

The royal standard was raised for the first time in Charles’ reign, as the new monarch and Camilla inspected bouquets of flowers left on the palace fence by members of the public, before entering their new London home.

The royal couple had been visiting the queen at her Balmoral estate in the Scottish Highlands before her death on Thursday.

Charles was due to hold an audience with Prime Minister Liz Truss, who was only appointed by the queen on Tuesday, before delivering a televised address to the nation at 6 p.m.

Bells tolled across Britain on Friday and mourners flocked to palace gates to honor Elizabeth as the country prepared for a new age under a new king. Around the world, her exceptional reign was commemorated, celebrated and debated.

As the country began a 10-day mourning period, people around the globe gathered at British embassies to pay homage to the queen, who died Thursday at Balmoral Castle in Scotland. 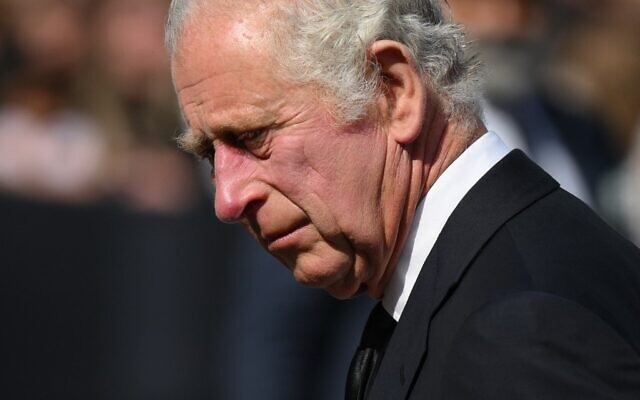 Britain’s King Charles III greets members of the public upon arrival at Buckingham Palace in London, on September 9, 2022, a day after Queen Elizabeth II died at the age of 96 (Daniel LEAL / AFP)

In London and at military sites across the United Kingdom, special guns fired 96 shots in an elaborate, 16-minute salute marking each year of the queen’s life.

In Britain and across its former colonies, the widespread admiration for Elizabeth herself was occasionally mixed with scorn for the institution and the imperial history she symbolized.

Elizabeth II had reigned for a record-breaking 70 years, a source of stability in a period of extraordinary change whose death sparked heartfelt tributes from across the world.

“During this period of mourning and change, my family and I will be comforted and sustained by our knowledge of the respect and deep affection in which the queen was so widely held,” Charles said in a statement.

Buckingham Palace said the king and other members of the royal family would observe an extended mourning period from now until seven days after her funeral.

The date of the funeral, which will be attended by heads of state and government, has yet to be officially announced but is expected to be on Monday, September 19.

While Britons adjusted to the shock of the departure of their only head of state since the aftermath of World War II, tributes poured in for one of the planet’s most recognizable people. 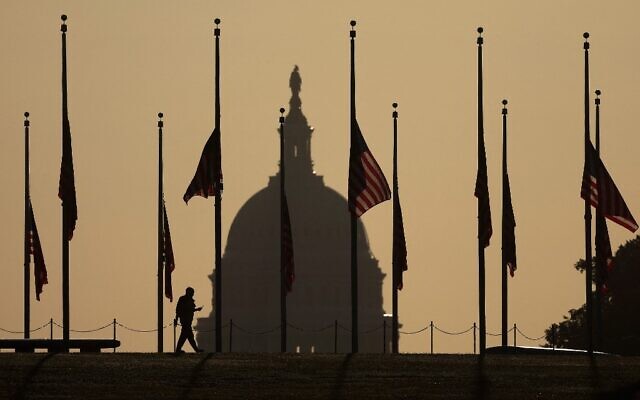 US flags are flown at half staff in tribute to the late Queen Elizabeth II on September 9, 2022 in Washington, DC (WIN MCNAMEE / Getty Images via AFP)

US President Joe Biden described the queen, whom he met for tea at Windsor Castle last year, as “a stateswoman of unmatched dignity.”

New York’s Empire State Building was illuminated after sunset in silver and royal purple, while the Eiffel Tower in Paris dimmed its lights in tribute. In Israel’s Tel Aviv, the municipality was lit in the colors of the British flag.

News of the death of the only British monarch most people alive today had ever known dominated global headlines, while the popular UK tabloid the Daily Mail declared: “Our hearts are broken.”

Flowers were left at British embassies around the world, including in Moscow — currently at odds with London over the war in Ukraine.

“A change of eras: first Mikhail Gorbachev, now Elizabeth II. The world is changing,” 18-year-old history student Mikhail Afrosin said, referring to the last leader of the Soviet Union, who died last month at the age of 91. 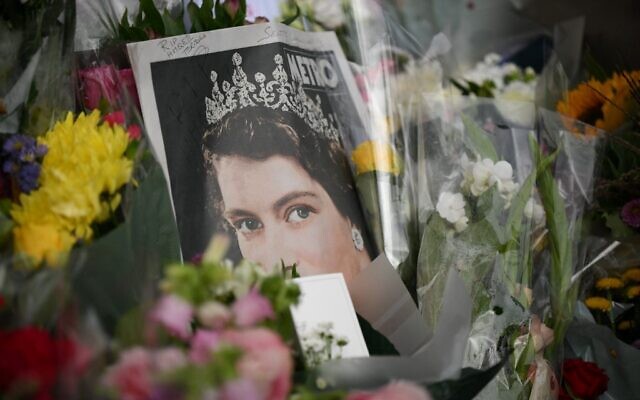 The front page of a newspaper and flowers are pictured outside of Buckingham Palace in London on September 9, 2022, a day after Queen Elizabeth II died at the age of 96 (Daniel LEAL/AFP)

The new king was expected to hold his first audience Friday with Prime Minister Liz Truss, who was only appointed on Tuesday in one of the queen’s last official acts before her death.

In a televised address after the queen’s death Thursday, Truss had offered the nation’s support for Charles — support backed unanimously by her cabinet on Friday.

“We offer him our loyalty and devotion just as his mother devoted so much to so many for so long,” she said, adding: “God save the king.”

On Friday, Truss opened the start of two days of special tributes in parliament, saying the queen was “one of the greatest leaders the world has ever known. 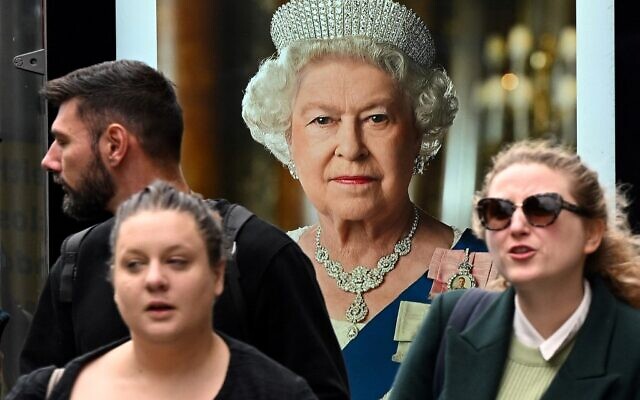 “Her legacy will endure through the countless people she met, the global history she witnessed and the lives that she touched,” the premier said.

Charles was also due to meet officials in charge of the arrangements for his mother’s elaborate state funeral, which will take place before she is laid to rest in the King George VI memorial chapel at Windsor Castle.

Church bells tolled at Westminster Abbey, St. Paul’s Cathedral and at Windsor, among other places, and Union flags flew at half-mast across the UK.

While the government has said there is no obligation on organizations to suspend business during the period of national mourning, many are doing so as a mark of respect.

The Premier League postponed all matches this weekend, the TUC umbrella body of trade unions postponed its congress due to begin on Sunday, while railway and postal workers halted upcoming strikes over pay, as Britain is gripped by soaring inflation and spiraling energy prices.

The queen’s death and its ceremonial aftermath come as the government strives to rush through emergency legislation to tackle the kind of war-fuelled economic privation that marked the start of Elizabeth’s reign in 1952. Elizabeth’s public appearances had become rarer in the months since she spent an unscheduled night in hospital in October 2021 for undisclosed health tests.

She was seen smiling in her last official photographs from Tuesday when she appointed Truss as the 15th prime minister of her reign, which started with Winston Churchill in Downing Street.

But the queen, visibly thinner and stooped, leant on a walking stick. Her hand was also bruised dark blue-purple, sparking concern.

Jane Barlow, the photographer who took the last public pictures of the queen on Tuesday, said she was “frail” but in “good spirits.”

“I got a lot of smiles from her,” said Barlow, who works for the UK’s domestic Press Association news agency.

The queen’s closest family members had rushed to be at her bedside at Balmoral, a private residence set among thousands of acres of rolling grouse moors and forests in the Scottish Highlands. Members of the public gather in Princes Street Gardens to observe the Death Gun Salute fired by 105th Regiment Royal Artillery at Edinburgh Castle to mark the death of Queen Elizabeth II, in Edinburgh, Scotland on September 9, 2022 (Lesley MARTIN / AFP)

Her body is expected to remain there initially before being taken Sunday to the Palace of Holyroodhouse in Edinburgh.

From the Scottish capital, her coffin is due to be flown to London on Tuesday for a lying in state accessible to the public.

Officials expect more than one million people to file past the catafalque in Westminster Hall, the oldest part of the parliamentary complex, before the televised funeral service at Westminster Abbey opposite.

Since news of her death broke, crowds have gathered outside Buckingham Palace in London, and Windsor Castle west of the capital, placing flowers and reflecting on the queen’s long reign.

As day broke on Friday, Joan Russell, a 55-year-old project manager from Hackney, northeast London, had tears running down her cheeks as she looked at the flowers outside the palace.

“I think I came to say a prayer. She has been our monarch all my life and she has led by example, she has learnt, she has listened, wherever you go, she is our stamp,” she told AFP. 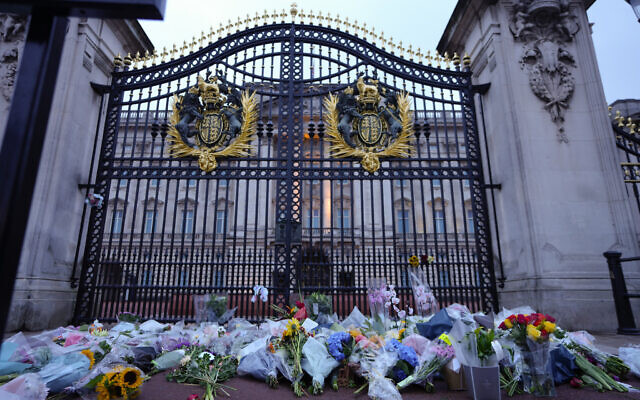 Flowers are seen at the gates of Buckingham Palace in London, September 9, 2022. (AP Photo/Kirsty Wigglesworth)

“Charles has had such a great example to follow. I believe he will do his very utmost to continue the legacy of his parents — his mum and dad — have set before him.”

At the gates of Balmoral, a contingent of Buddhist monks chanted as a mark of respect for the late queen.

Queen Elizabeth II came to the throne aged just 25 in the exhausted aftermath of World War II, joining a world stage dominated by political figures from Churchill to Mao Zedong and Joseph Stalin.

In the ensuing decades, the last vestiges of Britain’s vast empire crumbled.

At home, Brexit shook the foundations of her kingdom, and her family endured a series of scandals.

But throughout, she remained consistently popular and was head of state not just of the United Kingdom but 14 former British colonies, including Australia and Canada. 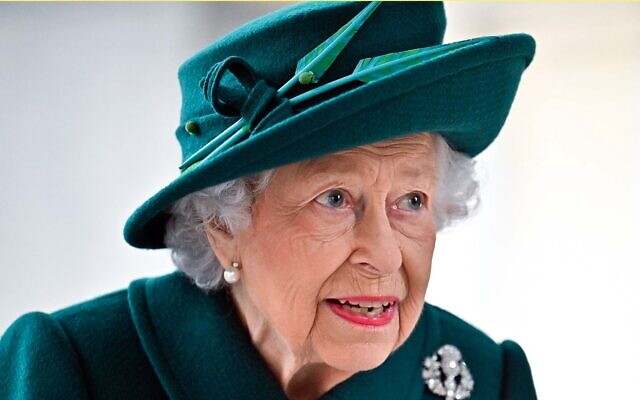 Queen Elizabeth II arrives for the opening of the sixth session of the Scottish Parliament in Edinburgh, October 2, 2021. (Jeff J Mitchell/Getty Images via JTA)

New Zealand proclaimed Charles its new king. But Australia’s new government looks set to revive a push to ditch the monarchy, casting doubt on his inheritance even as it mourns the queen.

The final public farewell at Westminster Abbey in London will be a public holiday in the form of a Day of National Mourning.

Charles’s coronation, an elaborate ritual steeped in tradition and history, will take place in the same historic surroundings, as it has for centuries, on a date to be fixed.