The camera focuses on text in Arabic with salient facts about Judaism — sacred sites, the Sabbath and festivals — before cutting to another page showing the common denominators between Judaism, Christianity, Islam and the Druze religion. In the background, Salameh, unseen, is heard complaining about the “brainwashing” that Palestinian schoolchildren in East Jerusalem are being subjected to.

“Tomorrow our children are going to start putting kippot on their heads,” he quips sarcastically. “What has this world come to?”

The post, which has garnered over 25,000 views, is just one of several addressing the issue on TikTok, WhatsApp, Facebook, Twitter and other social media sites as Palestinian residents of the capital protest Israeli efforts to impose the national curriculum on East Jerusalem schools.

The protests came to a head this month as tens of thousands of students and many teachers stayed home from school, holding a strike on September 13-18 to broadcast their unhappiness. Parents and teachers in East Jerusalem schools are allowed to choose their curriculum, but some say they are being forced toward the Israeli option.

Israel has long pushed for the adoption of its textbooks and lesson plans by East Jerusalem schools, starting shortly after it captured East Jerusalem in 1967. However, it gave up attempts to impose its own curriculum after a strike that lasted some two years, allowing schools to continue teaching with Jordanian textbooks, according to Eran Tzidkiyahu, a Jerusalem expert at the Forum for Regional Thinking and the Paris Institute for Political Studies.

Starting in the 1990s, Jordanian textbooks and lesson plans gave way to ones designed by the newly created Palestinian Authority, a rare instance of Israel allowing Ramallah to intrude on its claimed sovereignty over the entire unified city.

In 2018, the government tried to incentivize adoption of its plans, promising to inject NIS 445 million ($122.8 million) into revamping East Jerusalem after years of neglect, but conditioning 47 percent of the funds on local schools integrating Israeli materials.

Few schools have agreed. Yoav Zimron, the head of Jerusalem’s Education Department, told the Kan public broadcaster that 15,000 out of 115,000 East Jerusalem students were using the Israeli curriculum, though he noted that only 500 had taken up the offer when it was first presented. He claimed there had been “massive demand.”

Some Palestinian parents have also accused Jerusalem of withholding busing for children to schools that don’t adopt the Israeli curriculum.

City Hall denied the accusation that transportation services had been in any way withheld with the aim of pressuring schools into adopting an Israeli curriculum. 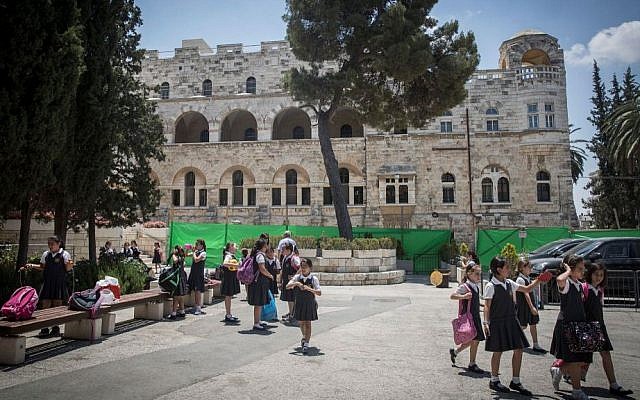 Jerusalem officials argue that they are not trying to force their curriculum on Palestinian residents, but rather offering them the option of using an Israeli curriculum that will help students’ eventual integration into the labor market.

But Palestinians say the Israel-approved curriculum whitewashes or removes references to Palestinian identity or national aspirations.

“The curriculum in East Jerusalem, and any curriculum for that matter, is not all about math or science, it’s about identity. It’s about providing the materials for creating national and other collective identities,” Tzidkiyahu said.

Among the content removed from Palestinian textbooks are Palestinian flags, pictures of late Palestinian leader Yasser Arafat and texts about the Palestinian right of return, the Ynet news site reported, citing protest organizers. References to “prisoners and refugees” were changed to “teachers and women,” they complained, and a sentence about the Muslim commandment to “carry out jihad” was removed.

A spokesperson for the PA decried what he said were “plans to Judaize, to Israelize education, to erase Palestinian national identity, to declare war on Arab Palestinian schools, and to kill the national consciousness of Jerusalemite students.”

Examples of the Israeli curriculum being criticized have proliferated on social media.

One video on TikTok shows a banner with the words “The States Surrounding the Homeland,” over an Israeli flag encircled by flags representing four Arab neighbors. The flag of Palestine is not present, nor are any Palestinian national symbols, according to sources. The Education Ministry did not respond to requests for authentication.

The video, which has been viewed 400,000 times, also shows a page with a dialogue between fictional characters Dina and Ahmed.

The pair take turns praising Israel for developing Arab villages, furnishing electricity, and providing for children and the elderly, before concluding in unison, “Let’s now sing the Independence Day anthem.” Many Arab Israelis reject Israel’s national anthem, which speaks of Jewish longing for “our land.”

An official in the Jerusalem Municipality said that “the page in question appears to belong to a very old textbook.”

“What they’re putting out is much more sensitive than textbooks from 20-30 years ago,” he added.

A picture posted on Facebook by the Jabel Mukaber parent teacher association contrasted what students would purportedly learn with each curriculum.

On the Israeli side are pictures of an Orthodox man showing a child a reconstruction of the Second Temple, Zionist and Israeli leaders from Theodor Herzl to Benjamin Netanyahu, a menorah and the Israel Defense Forces insignia.

On the Palestinian side are pictures of the Al-Aqsa Mosque, Arab leaders from Salah ad-Din to Yasser Arafat, and symbols of Palestinian identity, including keys to homes lost in 1948 and a keffiyeh.

“Our way of understanding things has been overturned, our consciousness has been distorted, distorted has been the order of our lives and our childrearing: in school, in the family, in society, and in the homeland,” the PTA wrote.

But Israeli officials say the verboten texts include lessons that they described as “incitement” against Israel.

Jerusalem City Hall has compiled excerpts found to be objectionable from the Palestinian textbooks in a document shared with The Times of Israel. In one instance, the Palestinian textbooks teach Arabic grammar to 6th-graders through a paragraph stating: “Palestinian lands have been subjected to a relics-theft operations since the beginning of the Zionist occupation that continues to this day, an organized operation in which the Zionist occupation has played a major role, in order to eliminate Palestinian heritage.”

The Israeli textbook replaces that with a paragraph about the abundance of Jewish, Muslim, and Christians antiquities across both Israel and Palestinian territories.

Another chapter in the Palestinian textbooks teaches 5th-graders Arabic grammar through encomia to Dalal Mughrabi, a terrorist who participated in the 1978 Coastal Road Massacre, in which 38 Israelis were killed. There, the Israeli textbooks inserted a chapter on respecting differences and kindness to others instead. 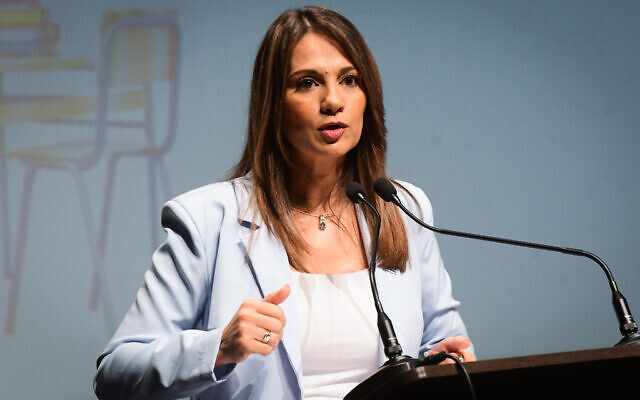 Education Minister Yifat Shasha-Biton speaks at a conference of the Federation of Local Authorities ahead of the opening of the school year in Ganei Tikva, August 18, 2022. (Avshalom Sassoni/Flash90)

In July, Education Minister Yifat Shasha-Biton appeared to switch tack from carrot to stick, delivering an ultimatum to six East Jerusalem schools to remove incitement against Israel and its soldiers from textbooks or be stripped of a license to operate. The move was perceived by East Jerusalem parents of children studying in schools using the Palestinian curriculum as “ extortion.” The Education Ministry declined to comment on the allegations.

“We will not make possible the teaching of material that incites against the state of Israel and the soldiers of the Israel Defense Forces,” Shasha-Biton tweeted this week. “Schools in East Jerusalem whose teaching materials have depicted IDF soldiers as killers, given praise to terrorists, and encouraged terrorism have been obligated to correct their materials or else have their licenses revoked. We will not make it possible for school financed from our budget to present incitement, hate, and terror.”

The Jabel Mukaber PTA decried the decision to condition funding for schools on changing the textbooks, writing on Facebook that the issue was marginal to “the sorry state of education in Jerusalem.”

According to Israeli NGO Ir Amim, East Jerusalem would need another 3,517 classrooms to serve the needs of all school-age children. It said the deficit has contributed to high-drop out rates.

Though some Palestinians vowed to keep the strike going indefinitely, students returned to their classrooms earlier this week.

“The students need to learn,” protest organizer Ramadan Taha told ToI. He is confident, however, that “a clear message has been sent.”