TEHRAN, Iran — Lawyers for Swedish-Iranian academic Ahmadreza Djalali, accused of espionage and threatened with execution in Iran, have demanded a retrial for their client, his attorney Helaleh Moussavian told AFP on Sunday.

Djalali was due to be hanged Saturday but his wife said that the execution did not take place. His sentence has been widely condemned by rights organizations and the Swedish government.

He was sentenced to death in 2017 on charges of espionage for Israel, allegations denied by Sweden and his supporters.

“We requested a retrial from the judicial authority a few days ago,” Moussavian said.

“We provided evidence that our client played no role in identifying the nuclear scientists,” she added.

Djalali was convicted over charges of passing information about two Iranian nuclear scientists to Israel’s Mossad spy agency that led to their assassinations. 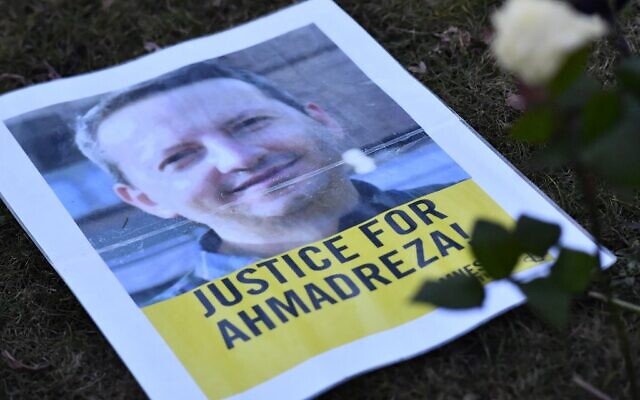 A flyer during a protest outside the Iranian embassy in Brussels for Ahmadreza Djalali, an Iranian academic detained in Tehran for nearly a year and reportedly sentenced to death for espionage, February 13, 2017. (Photo by DIRK WAEM / Belga / AFP)

Sweden granted Djalali citizenship while in detention in February 2018.

“My client’s sentence is still valid and the circumstances have not changed,” Moussavian said.

“Legally, the execution of the death penalty requires the lawyer to be informed in advance,” she continued. “So far, this has not happened.”

The United Nations’ rights commission on Tuesday called on Tehran to halt Djalali’s execution and revoke his death sentence.

It comes after Sweden concluded a trial in Stockholm of Hamid Noury, a former official in Iran’s judiciary, accused of war crimes for his role in the killing of prisoners in Iran during the 1980s.

Prosecutors have requested life imprisonment for the Iranian former official, and he is set to be sentenced in July. Iran has meanwhile condemned the “illegal” arrest and trial of Noury, and called for his release.