NICOSIA, Cyprus (AP) — Israel and Cyprus said Monday that they have made “significant” headway in resolving a long-running dispute over an offshore natural gas deposit and they are committed to quickly reaching a deal, as Europe looks for new energy sources.

Cyprus Energy Minister Natasa Pilides and her Israeli counterpart, Karine Elharrar, held talks in the Cypriot capital, pledging to press toward a “fair and swift resolution.”

Israel claims that a portion of Cyprus’ Aphrodite deposit estimated to hold some 4.4 trillion cubic feet of natural gas falls inside its nearby Ishai field, along an offshore demarcation line that separates the two countries’ exclusive economic zones.

Negotiations have stretched for several years, but Europe’s need to wean itself off Russian energy sources since the war in Ukraine appears to have added a new sense of urgency to the talks. Russia has cut back natural gas supplies to Europe, driving up prices.

“In light of the global energy crisis and the growing need for natural gas in Europe, I believe it is in our best interest that both parties should expedite a swift, transparent and fair settlement,” Elharrar said in a joint statement. “The trust between us and the continuation of fruitful cooperation in the various fields are very important for both parties.”

Pilides said the sides have made “significant progress” in fleshing out a roadmap that an expert appointed by both countries will follow, in order to hammer out a compromise deal. She added that discussions will continue in the following weeks. 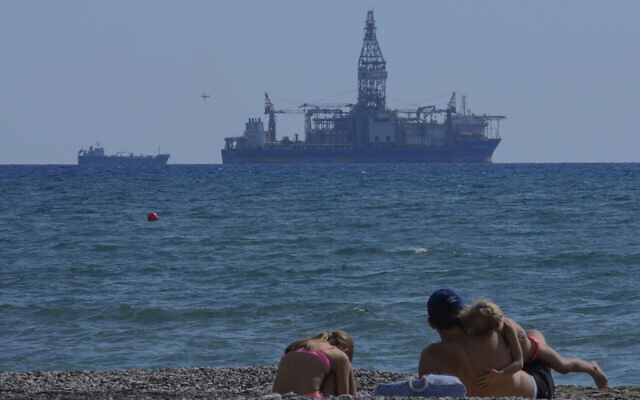 A family sit by the sea with a view of the ‘Tungsten Explored’ drilling ship, in the southern coastal city of Larnaca, Cyprus, November 3, 2021. (AP Photo/Petros Karadjias)

Chevron and partners Shell and Israeli NewMed Energy own the drilling rights to the Aphrodite field and have said that a plan to develop the deposit will be ready by the end of the year. Another well will be drilled in the coming months to gather additional information about the deposit’s size.

Pilides said last month that processing extracted gas at facilities in Idku, Egypt, is among the four development options being studied.

Prospects for the Aphrodite field as well as other gas deposits discovered off Cyprus received a boost after the European Union confirmed that natural gas could act as a bridge fuel until 2050 as part of the bloc’s transition to cleaner energy. Environmental groups have begun legal challenges, accusing the EU of derailing its commitment to reducing greenhouse gas emissions.