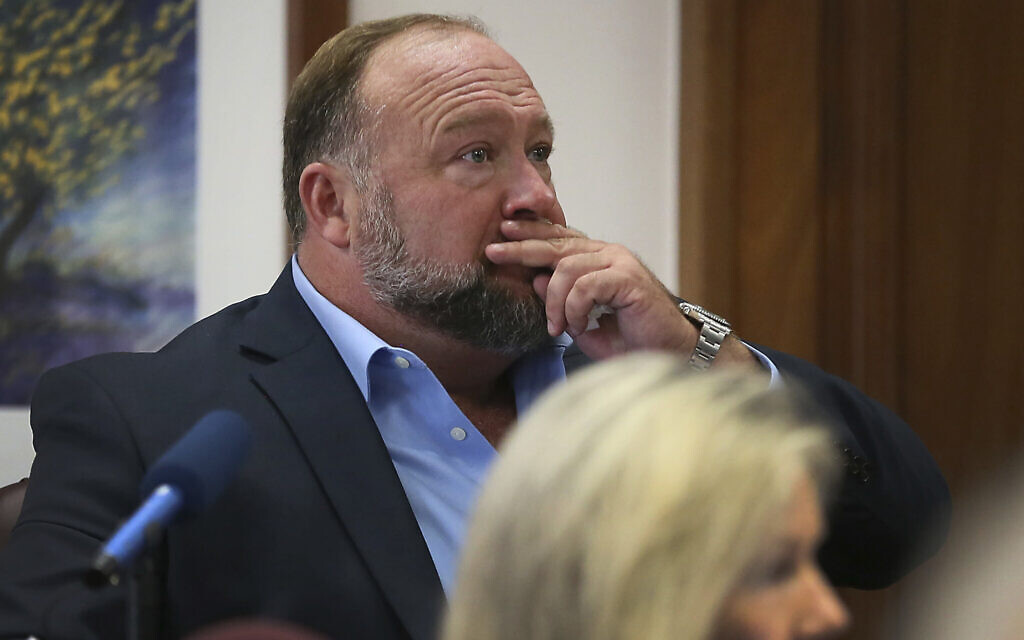 AUSTIN, Texas (AP) — A Texas jury on Thursday ordered conspiracy theorist Alex Jones to pay more than $4 million in compensatory damages to the parents of a 6-year-old boy who was killed in the Sandy Hook Elementary School massacre, marking the first time the Infowars host has been held financially liable for repeatedly claiming the deadliest school shooting in US history was a hoax.

The Austin jury must still decide how much the Infowars host must pay in punitive damages to Neil Heslin and Scarlett Lewis, whose son Jesse Lewis was among the 20 children and six educators who were killed in the 2012 attack in Newtown, Connecticut.

The parents had sought at least $150 million in compensation for defamation and intentional infliction of emotional distress. Jones’ attorney asked the jury to limit damages to $8 — one dollar for each of the compensation charges they are considering — and Jones himself said any award over $2 million “would sink us.”

It likely won’t be the last judgment against Jones over his claims that the attack was staged in the interests of increasing gun controls. A Connecticut judge has ruled against him in a similar lawsuit brought by other victims’ families and an FBI agent who worked on the case.

The Texas award could set a marker for other cases against Jones and underlines the financial threat he’s facing. It also raises new questions about the ability of Infowars — which has been banned from YouTube, Spotify and Twitter for hate speech — to continue operating, although the company’s finances remain unclear.

Judge: “You believe everything you say is true, but it isn’t. Your beliefs do not make something true. That is what we’re doing here.” #AlexJones goes to say something, judge cuts him off, “DON’T TALK”. pic.twitter.com/CwJZjOATM7

During the final day of testimony on Wednesday, Jones conceded that his claims had been false, that he now realizes how irresponsible he was and believes that what happened in the deadliest school shooting in American history was “100% real.”

“I unintentionally took part in things that did hurt these people’s feelings,” said Jones, who also acknowledged raising conspiracy claims about other mass tragedies, from the Oklahoma City and Boston Marathon bombings to the mass shootings in Las Vegas and Parkland, Florida, “and I’m sorry for that.”

But an apology isn’t enough for Heslin and Lewis. They said Jones and the media empire he controls and used to spread his false assertions must be held accountable.

WATCH: Scarlett Lewis speaks directly to #AlexJones in court. “I want you know that I’m a mother…I know that you’re a father… truth is so vital to our world…#SandyHook is a hard truth….” Jones shakes/nods his head periodically. “Jesse was real. I am a real mom.” pic.twitter.com/rwwBYUaD6T

The parents testified about a decade of trauma, inflicted first by the murder of their son and what followed: gunshots fired at a home, online and telephone threats, and harassment on the street by strangers, all fueled by Jones and his conspiracy theory spread to his followers via his website Infowars.

Jones — who has been banned from major social media platforms for hate speech and abusive behavior — has portrayed the lawsuit as an attack on his First Amendment rights and complained that he’s been “typecast as someone that runs around talking about Sandy Hook, makes money off Sandy Hook, is obsessed by Sandy Hook.”

“Do you know what perjury is?” pic.twitter.com/awbBpVf4Tl

At one point, Jones was told that his attorneys had mistakenly sent Bankston the last two years’ worth of texts from Jones’s cellphone.

And shortly after Jones declared “I don’t use email,” Jones was shown one that came from his address, and another one from an Infowars business officer telling Jones that the company had earned $800,000 gross in selling its products in a single day, which would amount to nearly $300 million in a year.