CNN anchor Christiane Amanpour on Thursday said an interview with Iranian President Ebrahim Raisi fell through over his demand she don a headscarf, amid deadly protests in Iran after a young woman died while under arrest for allegedly wearing a hijab in a manner that violated the Islamic Republic’s strict dress code.

Iran’s ongoing unrest, the worst in several years, began as an emotional outpouring over the death of Mahsa Amini, a young woman held by the country’s morality police for allegedly violating its strictly enforced dress code. Her death, and the ensuing crackdown on protesters, has sparked sharp condemnation from the United States, the European Union and the United Nations.

Amanpour said she planned to confront Raisi, who is in New York for the UN General Assembly, about the protests roiling Iran during a scheduled interview Wednesday, which would have been his first US-based interview.

However, according to Amanpour, Raisi did not appear when the interview was due to start and an aide told her the president refused to take part unless she wore a headscarf, given the “situation in Iran.”

“I couldn’t agree to this unprecedented and unexpected condition,” the British-Iranian anchor wrote in a tweet beside a photo of Raisi’s empty chair.

“As protests continue in Iran and people are being killed, it would have been an important moment to speak with President Raisi.”

The Iranian government did not immediately acknowledge her account.

Amanpour also noted she has not previously been required to wear a headscarf when interviewing an Iranian president “outside Iran.”

The protests in Iran first erupted over the weekend in the northern province of Kurdistan, from where Amini originated, but have now spread across the country.

The scope of the unrest still remains unclear as protesters in at least a dozen cities — venting anger over social repression and the country’s mounting crises — continue to encounter security and paramilitary forces.

An anchor on Iran’s state television suggested the death toll from the mass protests could be as high as 17 on Thursday, but did not elaborate or say how he reached that figure. “Unfortunately, 17 people and police officers present at the scene of these events lost their lives,” the anchor said, adding official statistics would be released later.

Iran Human Rights, an Oslo-based group, said at least 31 civilians have been killed in the crackdown by Iranian security forces. 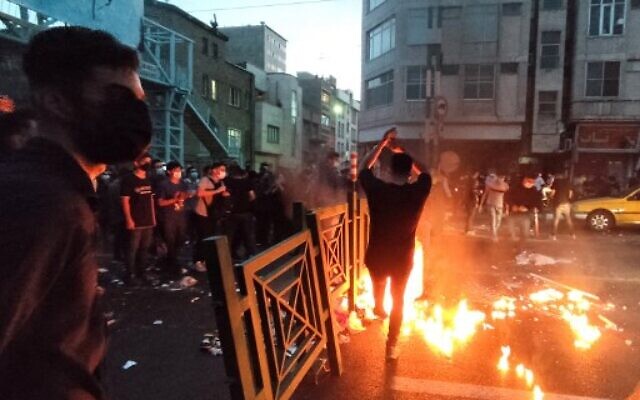 A picture obtained by AFP outside Iran on September 21, 2022, shows Iranian demonstrators taking to the streets of the capital Tehran during a protest for Mahsa Amini, days after she died in police custody. (AFP)

Widespread outages of Instagram and WhatsApp, which protesters use to share information about the government’s rolling crackdown on dissent, continued on Thursday. Authorities also appeared to disrupt internet access to the outside world, a tactic that rights activists say the government often employs in times of unrest.

The protests have grown in the last four days into an open challenge to the government, with women removing and burning their state-mandated headscarves in the streets and Iranians setting trash bins ablaze and calling for the downfall of the Islamic Republic itself.

Demonstrations have rocked university campuses in Tehran and far flung western cities such as Kermanshah. Although widespread, the unrest appears distinct from earlier rounds of nationwide protests triggered by pocketbook issues as Iran’s economy staggers under heavy US sanctions