US President Joe Biden said Thursday that a chemical weapon attack on Ukraine would “trigger a response in kind” by NATO, but did not offer additional details.

Speaking to journalists at a press conference at NATO headquarters in Brussels, Biden said a decision on what that response would look like would not be made until such an attack occurs, if it does.

“You’re asking if NATO would cross… we’ll make that decision at the time,” he said.

Biden asserted that NATO has “never been more united” after Russia’s invasion of Ukraine, though Russian President Vladimir Putin was banking on a divided alliance.

Earlier Thursday, Ukrainian President Volodymyr Zelensky warned there is a “real” threat that Moscow will use chemical weapons in Ukraine, accusing Russia of having already used phosphorus bombs against civilians in the country.

“The threat of full-scale use by Russia of chemical weapons on the territory of Ukraine is real,” Zelensky told a G7 summit in Brussels via video link, adding that Kyiv had information that Russian troops “used phosphorus bombs against peaceful people in Ukraine.” 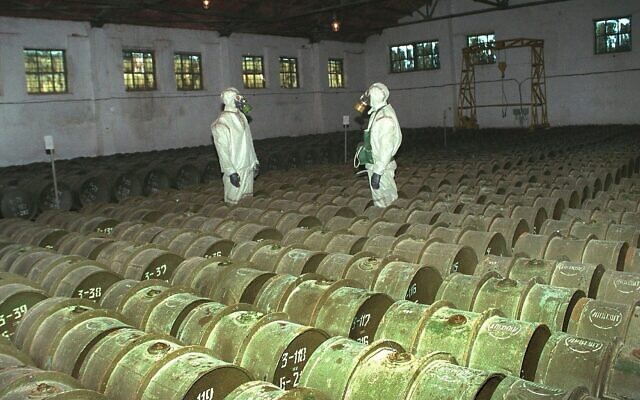 In this Saturday, May 20, 2000 file photo, two Russian soldiers make a routine check of metal containers with toxic agents at a chemical weapons storage site in the town of Gorny, 124 miles south of the Volga River city of Saratov, Russia. (AP Photo, File)

The Ukrainian leader called for a “total embargo” on doing business with Russia, and for Russia to be prevented from using the GPS navigation system “in times of war.”

Zelensky said Russian banks should be “completely cut off from the global financial system” and frozen Russian assets “should be used towards reparations to rebuild Ukraine.”

Zelensky also warned that the war in Ukraine could lead to a “global food crisis.”

“The longer there is no peace on Ukrainian territory, the less Ukrainian food the global market will receive,” he said.

He said the war could lead to shortages of “basic products” in “many countries of Asia, Africa, and even Europe.”

Ukraine is among the biggest exporters of farm-grown food, including wheat and maize.

Putin launched his shock invasion of Ukraine one month ago.

Death raining on #Ukraine’s #Popasna in #Donbas in form of phosphorus bombs.
So much for “stopping the genocide of the Donbas people”.

Earlier, NATO secretary-general Jens Stoltenberg said the alliance would step up its chemical and nuclear defenses for its forces in Eastern Europe in the face of fears over Russia’s war on Ukraine.