The White House on Friday affirmed the Biden administration’s recognition of Jordan’s role overseeing Muslim holy sites in Jerusalem after a meeting between the president King Abdullah II in Washington.

US President Joe Biden met with the Jordanian monarch at the White House after repeated clashes between police and worshipers at the flashpoint Old City holy site during the Muslim holy month of Ramadan. The incidents have caused escalating diplomatic tensions between Israel and Jordan.

The White House said in a statement following the meeting that Biden reiterated “his strong support for a two-state solution to the Israeli-Palestinian conflict and cited the need to preserve the historic status quo at the Haram al-Sharif/Temple Mount,” using the names for the holy site used by Muslims and Jews.

“The President also recognized the Hashemite Kingdom of Jordan’s crucial role as the custodian of Muslim holy places in Jerusalem,” the White House added.

Jordan ruled the West Bank and East Jerusalem from 1948 until the 1967 Six Day War, when Israel captured the area and subsequently claimed sovereignty in the Old City and an expanded Jerusalem.

Jordan has long maintained that its treaties with Israel grant it custodianship over Jerusalem’s Christian and Muslim holy sites; while Israel has never accepted this claim, it grants day-to-day administration of the Temple Mount to the Jordan-funded Waqf.

His Majesty King Abdullah II, at a meeting with US President Joe Biden at the White House, attended by His Royal Highness Crown Prince Al Hussein, reaffirms the deep-rooted friendship and strategic partnership between #Jordan and #USA #JORoyalVisit @POTUS @WhiteHouse pic.twitter.com/jWyOKxO5AZ

Known as Haram al-Sharif or the Al-Aqsa complex to Muslims, the Temple Mount is Judaism’s holiest site and Islam’s third holiest.

It has long been a tinder box for violence and conflict, with tensions again surging in recent weeks, including Palestinian riots, clashes with the Israel Police, and Jewish attempts to pray on the Mount.

Any changes to the longstanding status quo on the Mount, under which non-Muslims can visit but not pray, can lead to violence.

Recent tensions at the holy site came amid terror attacks against Israelis, pressure from Israel’s allies, threats from Hamas, and the exacerbation of the ongoing coalition crisis.

Abdullah has condemned Israel for the clashes, slamming the state for allowing Jewish pilgrims to enter the site and calling on the Israeli government to respect “the historical and legal status quo” there, according to a recent statement from the Royal Hashemite Court. 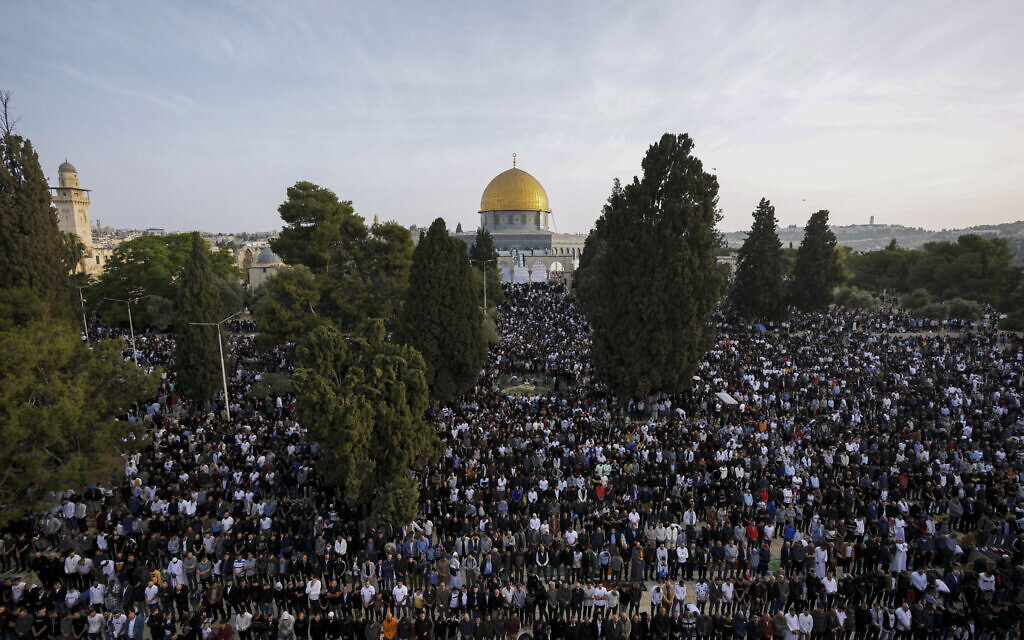 Muslims take part in Eid al-Fitr prayers next to the Dome of the Rock Mosque in the Al-Aqsa Mosque compound atop the Temple Mount in the Old City of Jerusalem, Monday, May 2, 2022. Eid al-Fitr, festival of breaking of the fast, marks the end of the holy month of Ramadan. (AP Photo/Mahmoud Illean)

Jordan’s foreign minister, Ayman Safadi, said Tuesday that Israel has no claim to holy sites in Jerusalem, which he said were “occupied Palestinian land.”

In an interview with Jordanian Al-Mamlaka TV, the top diplomat proclaimed that “Israel has no sovereignty in the Al-Aqsa Mosque — it is a place of Muslim worship. Only the Jordanian Waqf has full authority over the management of the compound.”

On Friday, Safadi lashed Israel after police in Jerusalem beat mourners at the funeral of Al Jazeera journalist Shireen Abu Akleh, who was killed during a firefight between Israeli troops and Palestinian gunmen in the West Bank on Wednesday.

“The terrible, inhumane Israeli aggression against mourners at the funeral demands a conscientious global response,” he said.

The White House called the incident “deeply disturbing,” and Biden said it “has to be investigated.”

Police said they intervened in the funeral procession because rioters took Abu Akleh’s casket against her family’s wishes and threw objects at officers.

Safadi also blamed Israel for Abu Akleh’s death on Friday. Israel has said it cannot determine who shot her without examining the fatal bullet, while the Palestinians have blamed Israel and rejected offers for a joint investigation.

Safadi said, “All the data and witnesses indicate she was shot to death by occupation soldiers. This crime requires international action.”