After a four-year struggle with breast cancer, track legend Lydia de Vega, once regarded as Asia’s fastest woman and one of the Philippines’ most accomplished and adored athletes passed away at 57.

“She has finished her contest. She has fought a good fight. Let us pray for her peace,” he said.

Throughout her career, De Vega earned 15 gold medals, including nine at the South-east Asian Games.

When she won gold medals in the 200 and 400 metres at the 1981 Manila SEA Games at the age of just 16, she quickly rose to fame on the track in the Philippines. 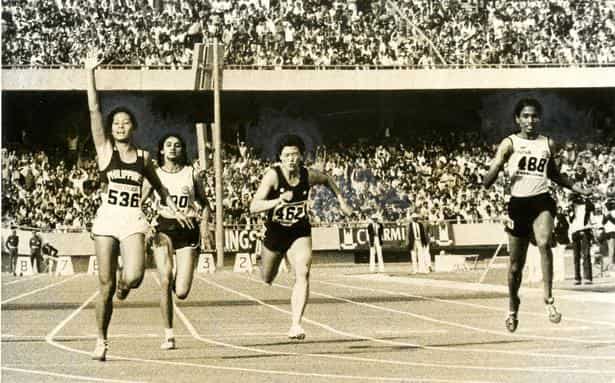 Filipino athlete actress Lydia De Vega raises her hand in triumph after winning the Asiad ‘82 women’s 100 metre race. On the far right (No.488) is P.T. Usha of India, who finished second to add to India’s silver medal tally at the Nineth Asian Games held in New Delhi on November 27, 1982. Photo credits: SPORTSTAR

The first time the two faced off was in the 100m at the 1982 Asian Games, where de Vega won after taking the lead halfway through.

However, Usha had reached the pinnacle of her career by 1985, winning five gold medals at the Asian Championships in Indonesia. De Vega on the other hand won a bronze medal.

Then, in the 1986 Seoul Asian Games, de Vega once again underlined her dominance in her preferred event: the one-kilometer race, while Usha—known as the “Payyoli Express”—dominated the 400-meter and 400-meter hurdles.

Deeply saddened on losing my athletics counterpart, a fierce competitor and good friend Lydia de Vega yesterday. She lost her life race to breast cancer but will always be remembered as a champion of life. My deepest condolences to her family! pic.twitter.com/RoyHdBEZH5