Hi-tech residue analysis of 6th-century BCE jug sherds shows that ancient Jerusalem’s elite imported vanilla from southeast Asia to flavor their wine. The findings, published today in the prestigious peer-reviewed PLOS ONE journal, confirm theories that the Kingdom of Judah was connected to international trade routes at the end of the First Temple period.

Ongoing excavations in the City of David National Park have unearthed dozens of large, 30-liter pottery jugs that were smashed during the destruction of Jerusalem during the Babylonian conquest in 586 BCE.

The eight jars that were examined in the current research come from two loci. Some of the handles are decorated with the seal impression in the shape of a rosette, indicating the Kingdom of Judah’s royal administration.

Ayala Amir, a doctoral student in the Department of Archeology and Ancient Near Eastern Cultures at Tel Aviv University, headed the residue analysis research in the laboratories at the Weizmann Institute and Bar-Ilan University. Her field of expertise combines the disciplines of chemistry and archaeology.

“When I arrived at the excavation site and saw the ceramic sherds, I knew what a great opportunity this was to discover the content of the jars,” said Amir. Until recently, she said, we didn’t have the technology to unravel the residue.

“We didn’t have any idea what we’d find” before completing the molecular analysis of the sherds’ residue, she told The Times of Israel on Tuesday. “It was a riddle.”

After undergoing the chemical procedure, Amir was presented with a series of molecules, some indicating wine, others olive oil, and three molecules that are found in vanilla, including vanillin.

The exotic spice was discovered in a “royal” Canaanite tomb dated to the later phase of the Middle Bronze Age (around 1700-1600 BCE) replete with gold jewelry during recent excavations at Megiddo in northern Israel. The research then indicated the vanilla was likely collected from South Asia vanilla orchid pods, showing that far-flung trade existed in the Bronze Age.

Based on the Megiddo findings, said Amir, it was easier to identify the vanillin molecules in the current research. 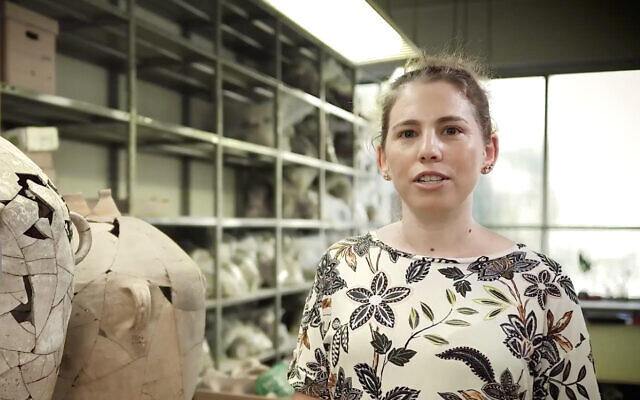 “Vanilla markers are an unusual find, especially in light of the fire that occurred in the buildings where the jars were found. The results of the analysis of the organic residues allow me to say with confidence that the jars contained wine and that it was seasoned with vanilla,” said Amir in a press release.

Dated to about 1,000 years after the Megiddo vanilla find, the archaeological context in the City of David also indicates an elite use, said Amir. Over 15 large storage jars were discovered in a wine cellar unearthed under a two-story administrative building in today’s Givati Parking Lot excavation, which is conducted by the Israel Antiquity Authorities and Tel Aviv University and led by Prof. Yuval Gadot and Dr. Yiftah Shalev.

“Jerusalem in the late Iron Age, the late First Temple period, was a major local center, not only administrative or religious, but also economic,” said Shalev in a video.

Stage of restoration of the 6th century BCE jars in the laboratories of the Israel Antiquities Authority under restorer Joseph Bocangolz. (Ortal Chalaf/IAA)

Another set was discovered in storage rooms on the eastern slopes of the City of David during excavations led by the IAA’s Ortal Chalaf and Dr. Joe Uziel.

“The opportunity to combine innovative scientific studies examining the contents of jars opened a window for us, to find out what they ate — and in this case — what they drank in Jerusalem, on the eve of the destruction,” said Uziel and Chalaf in a statement.

Amir noted that vanilla and other spiced wines are well known in other archaeological contexts, and indeed can still be found today.

Since this research is being published on the eve of Passover, a holiday in which one traditionally drinks four cups of wine, The Times of Israel asked Amir if vanilla wine would grace her seder table.

She laughed and admitted, “I’m not a big wine drinker, but maybe!”