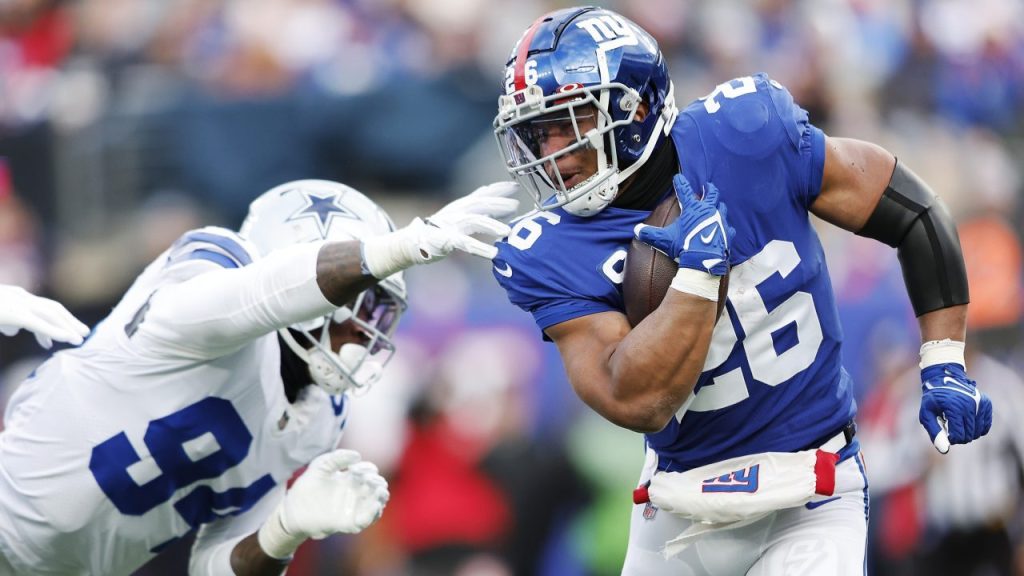 Doomsayers, take heed: The events of the next four days may force you to reconsider your end-is-nigh read on the state of linear television. As Fox Sports gets set to embark on a momentous holiday broadcast run, the numbers it’s about to generate should go a long way toward dispelling the palpitations and night sweats that accompany Wall Street’s chronic case of Media Anxiety Disorder.

Beginning with today’s Tryptophan Bowl down in Arlington, Texas, and extending through Sunday’s NFL doubleheader, Fox is on pace to generate nearly one-quarter of a billion dollars in ad revenue on football. (That’s “football” as we define it here in the colonies and not the other kind, the one replete with mononyms and magic spray.) Nestled between the NFL brackets are Black Friday’s World Cup match between the U.S. and a heavily favored England, and the 118th iteration of the Michigan-Ohio State hatefest.

Fox has served up some lucrative sports combo plates over the years, but this weekend is unprecedented, says Mike Mulvihill, who serves as Fox Sports’ executive VP, head of strategy and analytics.

“This is definitely a unique situation for us,” Mulvihill said. “We’ve had weekends in our history where we had the NFL leading into all those Yankees-Red Sox playoffs, and everything that was going on with the Cubs in 2016, but we’ve never had three distinct partnerships all on our air, with the biggest possible game. There’s never been a combination quite like this one.”

If the Nielsen ratings and ad sales figures that arise during the holiday weekend aren’t sufficient to make you revisit your Chicken Little takes on the state of network TV, you’ve got stuffing between your ears. Let’s talk turkey.

While a proper Thanksgiving feast is all about the accumulation of sides, Thursday’s Giants-Cowboys game can only be viewed as the main course. But this isn’t your grandmother’s turkey recipe; this game is a turducken that would have John Madden tucking in for a fifth helping. In the case of this NFC East grudge match, let’s do away with the paltry poultry—admit it: turkey stinks—and stuff a 72-oz porterhouse with a tenderloin filet and serve it in the belly of a great white shark.

At Fox, there are no sweeter phrases to hang together on the eve of America’s annual holiday spending spree than “playoff implications” and “doorbuster sale,” and the New York-Dallas broadcast will provide advertisers with 80 or so opportunities to get their message out to some 40 million couch-bound viewers. If you believe the ad industry’s assertion that co-viewing makes for an optimal environment for commercial impressions, then the Thanksgiving NFL window is an ideal buy; per Nielsen, 15.3 million out-of-home viewers took in CBS’s year-ago Raiders-Cowboys thriller, accounting for 38% of the network’s overall 40.8 million deliveries.

Given a $1 million unit cost and a not-inconsiderable hike in scatter rates, Fox’s holiday fest is on pace to take in some $110 million in overall ad sales. Not bad for a couple hours’ work, even if all the good pies will be gone by the time Kevin Burkhardt makes it home.

Fans will have plenty of time to shake off the carb coma in advance of Friday’s USA-America, Sr. match, which kicks off at 2 p.m. ET. While soccer isn’t designed to maximize ad spend, the TV turnout is expected to top the 13 million viewers ABC drew with its analogous U.S.-England 2010 broadcast from South Africa. As much as Fox’s early World Cup deliveries have been diluted by the calendar shift and what amounts to a 45% decline in TV usage since that long-ago 1-1 draw, Monday’s tie with Wales (8.31 million viewers) makes this a do-or-die match for the U.S.—and a must-see for soccer ultras and casual fans alike.

Less than 24 hours after that patricidal soccer dustup plays itself out, sports enthusiasts will bear down for a rivalry so legendary that it is referred to with the sort of monolithic understatement normally reserved for vengeful deities. In what may be the most consequential installation of The Game in recent memory, the No. 2 Ohio State Buckeyes host the No. 3 Michigan Wolverines in a battle of undefeated Big Ten powerhouses that will determine the course of the College Football Playoffs. The winner advances, the loser likely spends New Year’s Eve watching the ball drop on TV.

While there may be room for a one-loss team among the top four, the best chance of assuming a berth in the semis is to defeat one’s conference rival in the biggest regular-season game of 2022. Last year’s Wolverines-Buckeyes matchup, in which Michigan earned its first victory over its arch-nemesis since 2011, averaged a season-high 15.8 million viewers, although Friday’s numbers may be more in keeping with ABC’s deliveries in 2016. That year also featured a No. 2 OSU squad playing host to a No. 3 UM, and the home team’s double-overtime win averaged 17 million viewers.

Conservative estimates put Fox’s Saturday take at $20 million during its Big Noon window, and that’s before the subsequent Iowa State-TCU and Kansas-Kansas State games are factored in.

The festivities wind down with a rare Thanksgiving weekend NFL doubleheader, which Fox tends to eschew in years it broadcasts the big game in Dallas. In addition to its slate of five regional games, the network will air Rams-Chiefs in 94% of its markets during the Sunday afternoon national window. That’s another $85 million on the pile; all told, Fox is looking at a four-day haul of some $245 million in sales, or about 6% of the $4.44 billion the network booked during fiscal 2021.

For Mulvihill, the holiday run is reminiscent of years gone by, when a full afternoon of NFL action would lead directly into a Marlins-Yankees World Series game (2003). Or take the inspired lunacy of the overstuffed 2015 slate, when a doubleheader capped by a Seahawks-Cowboys outing which scared up 29.4 million viewers set the table for the Royals’ Game 5 clincher over the Mets. Fox whipped up $100 million in sales over the course of that 16-hour Sunday stretch, making it the network’s most lucrative non-NFC Championship/Super Bowl broadcasting day.

But this weekend will put that 2015 tear to shame.

Fox’s resident research guru said he believes the whistle-to-whistle deliveries for USA-England will be the most-watched men’s World Cup match in history, while Saturday’s Big Ten battle is all but guaranteed to draw more eyeballs than any other regular-season college football matchup. The NFL will do its usual gangbuster numbers, although it’s worth noting that CBS set the all-time record last season with its OOH-enhanced Cowboys coverage.

Mulvihill said he believes the draw with Wales will drive even more viewers to Friday’s World Cup game, as the U.S. likely will need to generate significant points against the Three Lions if it’s to advance to the knockout stage. The unpredictable nature of the tournament is also a boon. “It’s a bit like the NCAA tournament, where you get that first big upset in the opening round, and that sets the tone for the rest of the schedule,” Mulvihill said. “I think that Saudi Arabia-Argentina result really seems to have jumpstarted this World Cup.”

However things shake out for the young U.S. squad, let the next four days serve as a reminder that it’s premature to start gathering eulogy material for Gregg Berhalter’s charges, and the same applies to the legacy TV model. Across the board, the networks have notched ratings increases for some NFL packages, as well as for regular-season MLB, NBA, NHL and NASCAR broadcasts. For a dying industry, TV sure is making an awful lot of noise (and revenue) on its way to the boneyard.

“If you’re out there writing the obituary for the linear TV, maybe take a long, hard look at the numbers we’re going to do over the next few days,” Mulvihill said. “It may be an old-school business model, but it’s got a very strong heart.”