Skip to content
HomeNewsWhat was Joe Biden thinking when he fist-bumped the Saudi Crown prince? 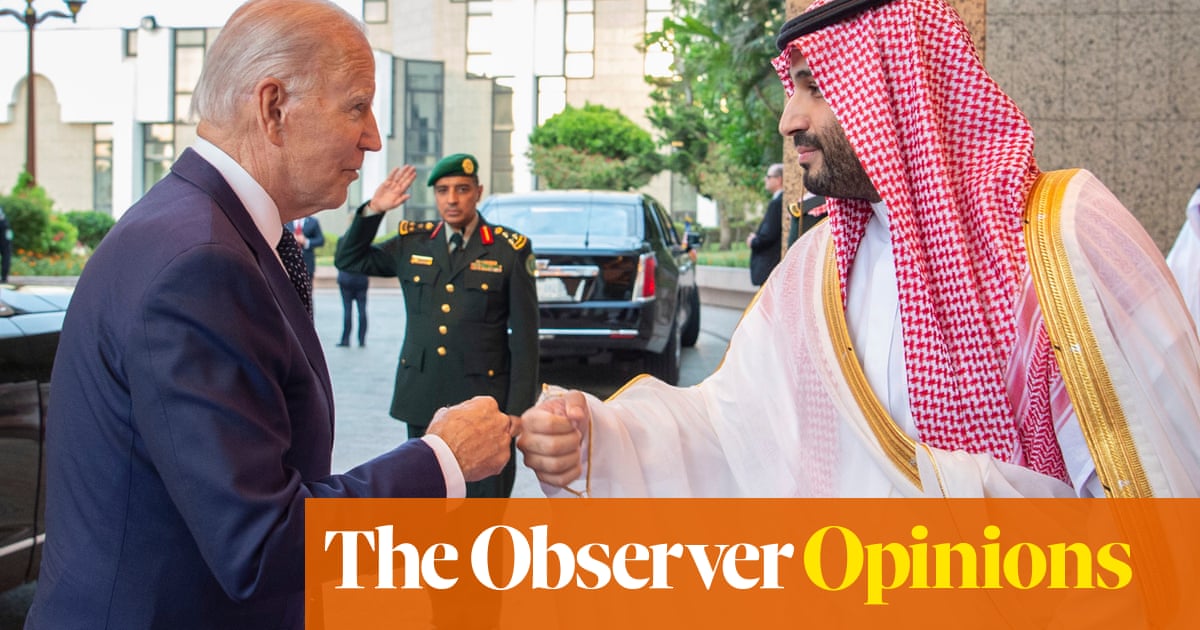 What was Joe Biden thinking? His excruciating fist bump with Mohammed bin Salman, the Saudi crown prince he and much of the world regard as a murderer, marks the low point of a presidency that is slowly dying on its feet.

Maybe America’s tottering president thought he was doing it for his country’s sake. But many in his country will be dismayed that a man Biden deemed a pariah after the 2018 killing of journalist Jamal Khashoggi is back in from the cold.

“With respect to the murder of Khashoggi, I raised it at the top of the meeting, making it clear what I thought of it at the time and what I think about it now,” a defensive Biden said later. But why, evidently, has his thinking changed? Why these salaams for Salman?

If so, his and his team of PR aces were sadly disappointed. Slippery Salman and his dad the king had previously made their position clear. There would be no increase in oil production before an Opec meeting next month, if then.

So what was Biden thinking?

Maybe he’s not thinking clearly at all. When a president’s approval rating drops to 33%, as Biden’s did last week, when most Democrats say he’s too old to run again, and when inflation is driving maddened voters into the arms of opponents, the mind tends to mist up.

Biden, product of a bygone era, embodies not a new American century but a new American frailty. In the Arab Middle East, they used to jump to attention when US presidents called. Now they put them on hold and ring Moscow or Beijing.

Cloudy thinking may also account for Biden’s bumpy ride during an earlier pointless performance in Bethlehem. He told Mahmoud Abbas, another president past his best, that even after all these years of lead and tears, an independent Palestine was a great idea whose time has still not come.

Abbas, 87, makes Biden, 79, look feisty. Well, not really. But you can’t beat Joe for grandfatherly empathy. “The Palestinian people are hurting now,” he said. “You can just feel it. Your grief and frustration. In the United States, we can feel it.” Really? Gosh.

Biden said Palestinians must wait until they have a “political horizon they can see”. Did he mean the Promised Land? No. That’s taken. Back on more familiar ground, he took a swipe at the British, always an easy target for a man on the way down.

According to Joe, the way Israelis persecute Palestinians is just like the way the Brits persecuted Irish Catholics, including his family, for over 400 years.

This is not what Benjamin Netanyahu, the once and future Israeli prime minister, Trump mucker and top persecutor, wants to hear. But hey! Biden could not bear to look MBS in the eye in Jeddah. Yet he gladly shook hands with Bibi in Jerusalem.

What was he thinking?