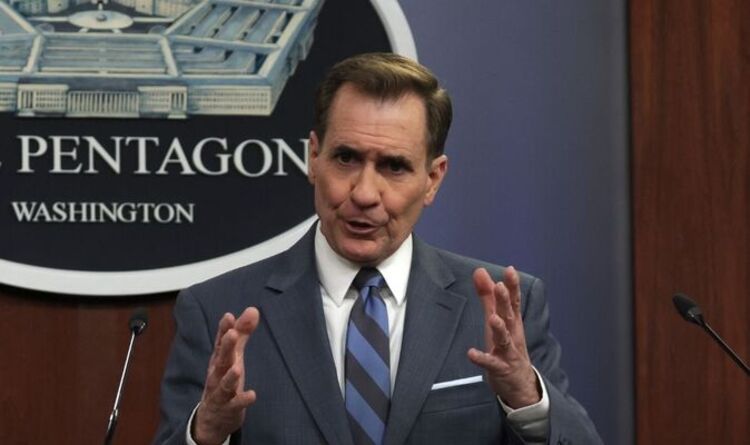 Pentagon Press Secretary John Kirby held a press conference on Wednesday and commented on the increased US military aid package to Ukraine and the future outcome of the conflict. Mr Kirby discussed Joe Biden’s $100 million additional Presidential drawdown of security assistance for Ukraine.

He also mentioned how effective the Javelin anti-Armour systems had been in the fight against Russia, many of which have been provided by the US.

Mr Kirby said Biden’s support package is: “the sixth drawdown of equipment from DOD inventory for Ukraine since August 2021, combined with the $300 million in military assistance that we just announced on the 1st April.

“This will bring the total US security assistance commitment to Ukraine to more than $1.7 billion since the beginning, just the beginning of Russian invasion on the 24th February.”

He added: “The United States along with our allies and partners will continue to work closely with our Ukrainian partners to evaluate their specific requirements, to ensure that our assistance meets their highest priority needs as again they continue to courageously defend their county.”

With the United States having spent so much money on the conflict in Ukraine and sent a large amount of aid and weaponry, questions have arisen over how long this conflict may go on for and the amount of support that can be given in the long-term.

Despite US officials reporting that at least 24,000 Russian troops have withdrawn from Kyiv, there are fears that they have only retreated to be re-deployed elsewhere in a stronger show of force.

A US Defence Official stated that it is now “not clear what [Russia’s] longer-range goals are” after the troop withdrawals.

Mr Kirby added: “[Putin’s] only really taking control of a small number of population centres and even they weren’t the ones that he was really going after.

“So, I think the proof is literally in the outcomes that you’re seeing every day.

“The Ukrainians are bravely fighting for their country, and they have denied Putin so many of his strategic objectives.”