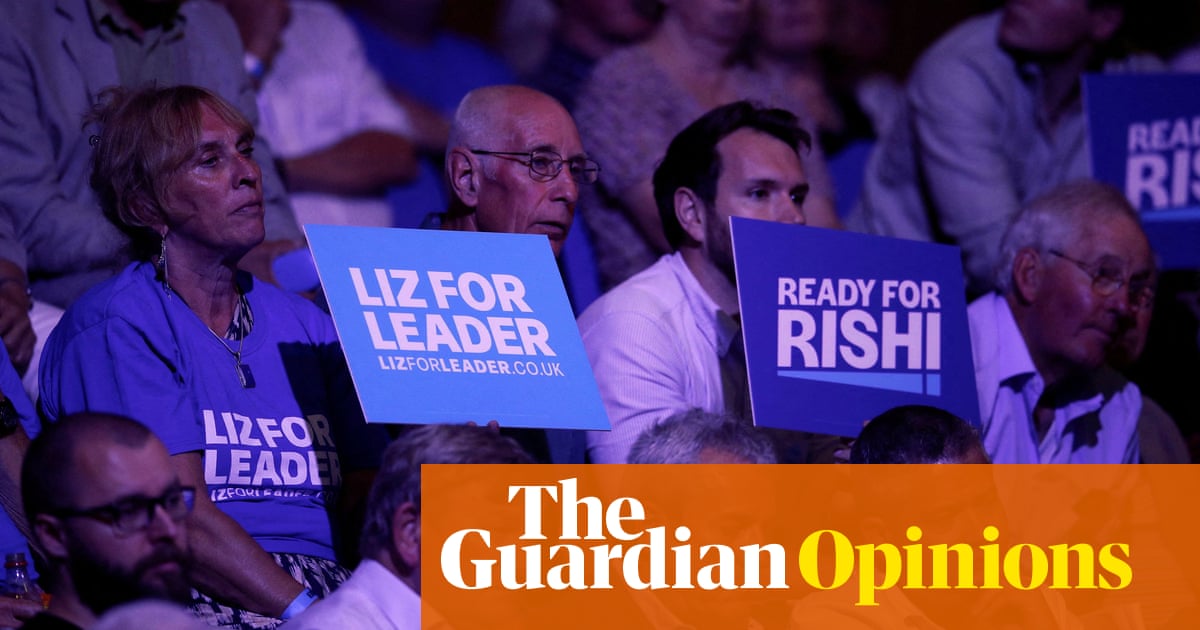 The Bank of England raises rates in the biggest jump since 1995. Just to “do something”, it deepens the cost of living crisis while doing nothing to ease inflation caused by the global price of energy and food. How could that be caused by a wage-price spiral when average wages are falling at their fastest rate in two decades. The Bank also predicts a recession as deep as that of the 1990s.

For whoever steps through the door of 10 Downing Street next month, this is just one more misery that hits the “squeezed middle” and those above them with mortgages, as well as the “just about managing” and the low paid. But this strange Tory leadership contest inhabits another universe, barely touching on the issues that pollsters find most concern voters.

Whether the winner is Liz Truss or Rishi Sunak, they will face inflation hitting 15%, according to the Resolution Foundation, as insolvencies rise by 80%. They face strikes against real-terms pay cuts for public sector staff, from nurses and teachers to council workers and others working in essential services that everyone can see are on their knees because of austerity.

But either challenger for the job of prime minister will face monumental problems of their own creation by having promised the impossible, the undeliverable and the unspeakable. Touting for the votes of the tiny Tory party electorate, they march rightwards into the long grass wilderness. Each step takes them further from voters they will need. Talking to the pollsters, these two have abandoned the famous “Overton window” of policies the broad electorate finds acceptable. Patrick English of YouGov tells me: “They have moved the discussion much further to the right than where the public stands on most issues like immigration, equalities and tax cuts.”

Look at how moderation is drained from the Tories at Westminster. In an indecently self-serving scramble for ministerial office, even those wrongly labelled “one nation” types such as Tom Tugendhat, Penny Mordaunt and the Boris Johnson critic, Sajid Javid, rush to join the Truss bandwagon. Or electoral tumbril, as it may turn out to be.

Truss clinging loyally to Johnson – “He did a fantastic job as prime minister” – may score well with all those Tory members who would still vote for him again if it were his name on their ballot paper. But the disgraced former leader will be an albatross around Truss’s neck with the general electorate. Chris Hopkins of Savanta ComRes says: “He has done so much damage to the Tory brand.” He is still wildly unpopular with voters, and Partygate is still a cause of outrage.

Naturally, voters worry most about the cost of living, but that doesn’t mean they back tax cuts, says Gideon Skinner of Ipsos Mori. They are split, and prefer rising spending to spending cuts. And, he says: “They want to know more about what they would actually do about the cost of living, about people’s rising bills.” That Laffer curve of unicorn economics that says tax cuts perversely bring in more to the Treasury doesn’t seem to convince most people.

Just look at the promises of this Conservative party. Despite exports to the EU falling by 14% last year, its Northern Ireland protocol bill threatens a trade war. The ominously bellicose Truss talks as if she were confronting the Nazis or Stalin: “We’ve learned from history that there is only one thing the EU understands and that is strength.” A bonfire of EU regulations “further and faster” will find no favour, as pollsters say voters want higher not lower standards for food quality, chemical and goods safety, animal welfare and worker rights. Voters want more people let in from the EU to fill vacancies. Few leave voters want to feel they were wrong. But Labour’s “make Brexit work” will stand in good contrast with Truss’s intent to make Brexit worse.

People want higher business taxes, but Truss would stop that, even as profiteering by the likes of BP and Shell pours billions into shareholder pockets. Neither candidate calls for them to use the bonanza to ease consumer prices or to invest in renewables.

As for the climate, voters rank it high in their concerns, including Tory voters, though it barely features in this debate. Truss backs fracking (unpopular) and would stop land being used for solar farms, while Sunak would ban the onshore windfarms that are the cheapest renewables. Ipsos’s Skinner finds a majority of voters wanting to meet net zero targets and half want that target reached sooner than 2050.

Housing? As prices rise by another 11% this year and mortgages move even further out of reach of the young, Truss abandons targets for housebuilding. Both want higher education standards, but neither offers money.

Neither says much about the collapsing NHS, though it is voters’ second highest concern in most polls. Sunak would charge £10 for missed GP appointments, something opposed by GPs who know their patients’ many problems – and collecting it would cost more than that. His “taskforce” to bring down waiting lists was greeted with derision by desperate NHS staff: where’s the money for training more clinicians? Truss would cut NHS “bureaucracy”, despite only 2% of UK healthcare spending going on administration – less than half what France and Germany spend. “Bureaucracy” is a phoney saving that is the last refuge of scoundrel politicians. Should scarce doctors and nurses spend more time on admin?

As they compete to send most refugees to Rwanda, even that is not straightforwardly popular: immigration has lost its saliency and, says Skinner, “views are quite nuanced”.

Now that’s something you couldn’t say about the ever more extreme positions taken by these two. Sunak would cut income tax by 4%! Truss revived her old idea of cutting public sector pay in all the regions relying on it most, though she was forced to U-turn. On with the circus! A whole month more of preposterous, incredible and unpopular promises will make both contenders increasingly unpalatable to ordinary voters at a general election.