Skip to content
HomeNewsShore, Oilers use shootout to edge Canucks 3-2 in final game of regular season 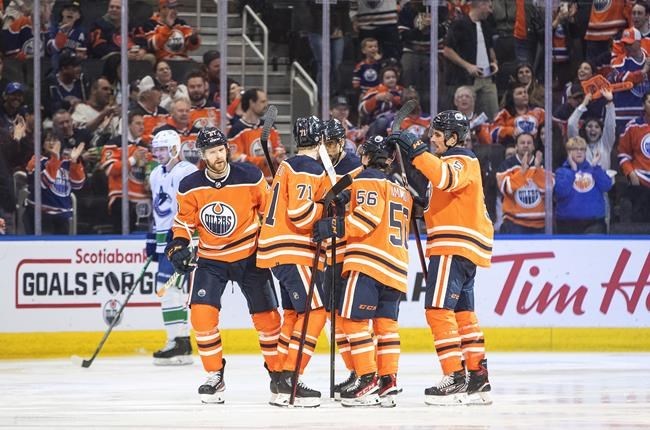 EDMONTON — Even with star forwards Connor McDavid and Leon Draisaitl resting for the playoffs, the Edmonton Oilers were able to close out the regular season on a high note.

Devin Shore was the lone player to score in a shootout session that went 10 players as the Oilers managed to capture a 3-2 victory over the Vancouver Canucks on Friday.

Brett Kulak and Tyson Barrie also scored for the Oilers (49-27-6) who set a new franchise record for consecutive games with a point at home, going 14-0-1 in their last 15 appearances at Rogers Place. Edmonton, which will face the Los Angeles Kings in the first round of the playoffs, has also won seven of its last eight overall.

“The way we have been playing over the last little while, even the last two-and-a-half months, it is all building towards what we are going to be stepping into (with the playoffs) on Monday,” Barrie said. “I think we are in a good position, we are a confident group and we know what is expected of us and what our systems are. We are just ready and excited to execute it.

“I’ve been there a bunch of times, but I have never been this excited to get into the post-season.

“I think we have a real shot at it this year and I can’t wait ’til Monday.”

Oilers head coach Jay Woodcroft, who has a 26-9-3 record since taking the job, is looking forward to the regular pace of playoffs after a hectic last few months.

“It’s been a sprint,” he said. “For me, personally, coming up in the middle of February, it feels like the schedule has felt relentless, but we’ve felt comfort in the rhythm of that. I do like where our team is at.”

J.T. Miller and Conor Garland responded for the Canucks (40-30-12) who ended their campaign with losses in four of their last six, after missing post-season play.

“I told them I was really proud of them. I can take maybe four or five games where we didn’t start out very well, but out of the 50-some games that I was here, the effort was there almost every night,” said Canucks coach Bruce Boudreau. “I’m unhappy that we didn’t make the playoffs, but not unhappy with the way we played and I think the organization has a bright future.”

The Canucks almost got on the board with a power-play opportunity midway through the first when a shot was trickling into the net behind Oilers goalie Mikko Koskinen, but Duncan Keith fished the puck to safety just in time.

However, Vancouver would start the scoring with 2:27 left in the opening frame when Miller blasted a shot off the crossbar and into the net for his 32nd goal and 99th point.

There was no scoring in the second period, with the Canucks sitting at 30 shots after 40 minutes, while the Oilers had 18 on Vancouver starter Spencer Martin.

Edmonton tied the game 31 seconds into the third as a Kulak blast from the point found the back of the net with Evander Kane providing the screen in front.

Vancouver moved back ahead two minutes later on a goal Koskinen would like back as Garland tucked it under his arm from about the face-off dot.

The Oilers knotted the game back up nine minutes into the third on a long-range bomb through a screen by Barrie, eventually sending the game to extra time.

Edmonton hosts the opening game of their first-round series against the Los Angeles Kings on Monday.