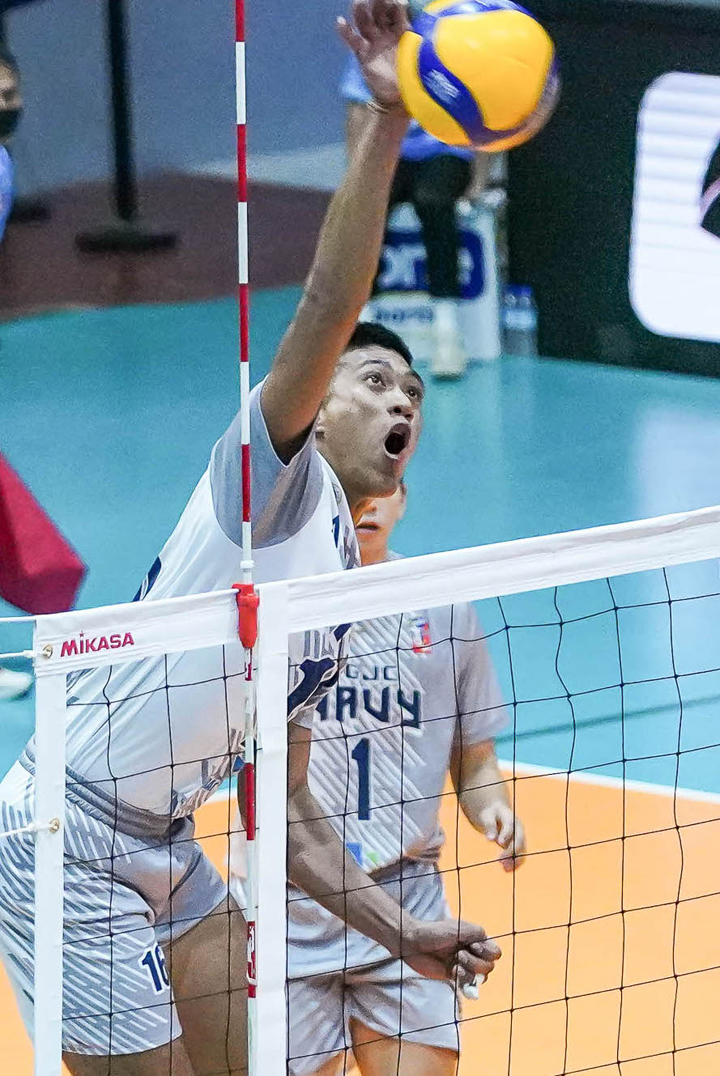 PGJC-NAVY sustained its blistering eliminations windup with a 25-23, 25-22, 25-22 victory over VNS-One Alicia to wrest the early lead in the semifinal round of the Spikers’ Turf Open Conference at the Paco Arena in Manila on Thursday.

But the Sealions needed to overcome the odds, including an early injury scare to Ron Rosales and a pesky VNS-One Alicia side that just wouldn’t give up before pounding out the straight-set victory to fan their drive in the round-robin Final Four.

Skipper Greg Dolor blasted in kills from all angles to lead the Sealions’ assault in the first two frames on his way to a 20-point output. Jao Umandal shook off a slight neck sprain then took over to fire 12 kills, the last finishing off the hard-luck Griffins in one-hour and 24 minutes.

The Griffins grabbed a 16-12 lead in the third to spark hopes for a big comeback but the Sealions came out of a huddle an organized lot, taking five of the next six points to force a tie then outscoring their rivals, 5-1 to build a four-point cushion.

It was Navy’s fifth straight victory, counting the four that anchored its elims campaign, including a four-set win over VNS last Saturday, as the Sealions nipped the Cignal HD Spikers and the Sta. Elena Nationals for the No. 1 spot in the elims.

“It’s the semis, so the training and all the sacrifices must come into fore,” said Dolor, who added two kill blocks to earn another player of the game honor.

The Sealions, meanwhile, brace for a tough task against the Nationals tomorrow, seeking not only to move closer to a dream finals stint but also a payback against the only team that dealt their lone loss in the elims in five sets (18-16) last Sept. 6.

“We’ll train, prepare hard and study their weak points to get back at them,” Dolor said.