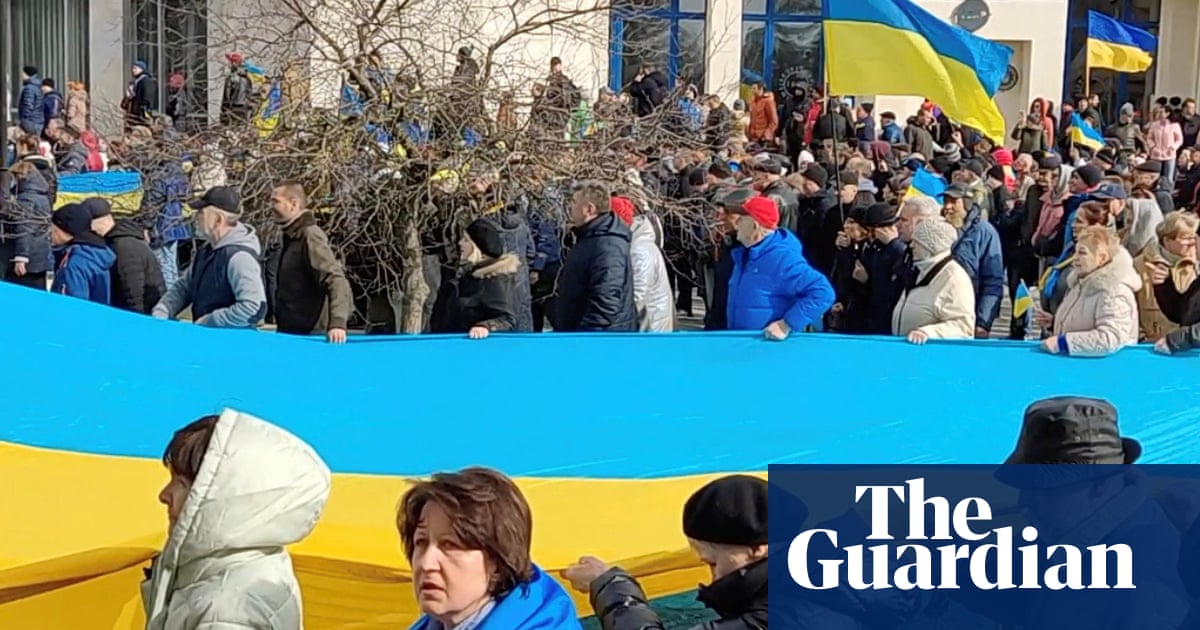 A mayor in a Ukrainian town occupied by Russian forces has been released from captivity and the soldiers have agreed to leave after a mass protest by residents.

Slavutych, a northern town close to the Chernobyl nuclear site, was taken by Russian forces but stun grenades and overhead fire failed to disperse unarmed protesters on its main square on Saturday.

The crowd demanded the release of mayor Yuri Fomichev, who had been taken prisoner by the Russian troops.

Attempts by Russian troops to intimidate the growing protest failed and on Saturday afternoon Fomichev was let go by his captors.

An agreement was made that the Russians would leave the town if those with arms handed them over to the mayor with a dispensation for those with hunting rifles.

Fomichev told those protesting that the Russians had agreed to withdraw “if there are no [Ukrainian] military in the city”.

The deal struck, the mayor said, was that the Russians would make a search for Ukrainian soldiers and arms and then depart. One Russian checkpoint outside the city would remain.

The incident highlights the struggle that Russian forces have faced even where they have had military victories.

Slavutych, population 25,000, sits just outside the so-called exclusion zone around Chernobyl – which in 1986 was the site of the world’s worst nuclear disaster. The plant itself was seized by Russian forces soon after the start of the 24 February invasion.

“The Russians opened fire into the air. They threw flash-bang grenades into the crowd. But the residents did not disperse, on the contrary, more of them showed up,” said Oleksandr Pavlyuk, a governor of the Kyiv region in which Slavutych sits.

Meanwhile, Ukraine’s defence ministry claimed that Russian was “trying to intensify the activities of sabotage and reconnaissance groups in Kyiv in order to destabilise the socio-political situation, disrupt the system of public and military administration”.

Western officials have said that Vladimir Putin had planned to take Ukraine’s capitals within days of announcing his “special military operation” on 24 February but had come across unexpectedly fierce resistance.

While the occasional blast can be heard in Kyiv from fighting to the west of the city, the centre has been calm for most of the past fortnight.

“To start with they wanted blitzkrieg, 72 hours to get control [of] Kyiv and much of Ukraine, and it all fell apart,” Mykhailo Podolyak, an adviser to the president, Volodymyr Zelenskiy, and the lead negotiator in talks with Russia, in an interview in Kyiv.

“They had poor operational planning, and they realised it was advantageous for them to surround cities, cut off the main supply routes, and force people there to have a deficit of food, water and medicines,” he said, describing the siege of Mariupol as a tactic to sow psychological terror and exhaustion.

However, Podolyak expressed scepticism over a claim from the Russian defence ministry on Friday that Moscow’s forces would now focus mainly on the Donbas area in east Ukraine.

“Of course I don’t believe that. They don’t have interests in Donbas. Their main interests are Kyiv, Chernihiv, Kharkiv and the south – to take Mariupol, and to close the Azov Sea … we see them regrouping and preparing more troops to send in,” he said.