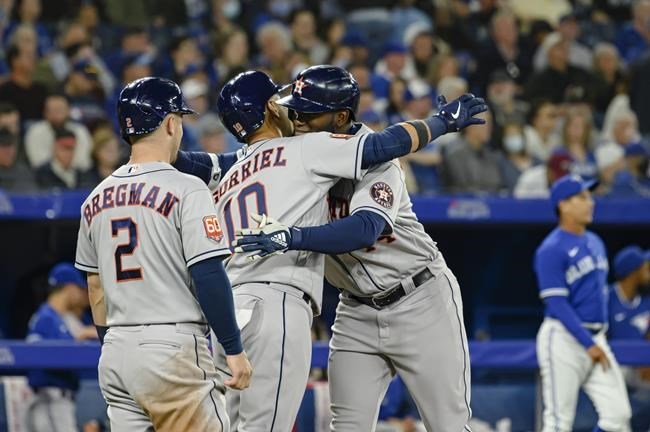 TORONTO — Yusei Kikuchi will still be a work in progress for Toronto Blue Jays pitching coach Pete Walker after a disappointing start on Friday.

Kikuchi lasted only 2 2/3 innings, striking out four but allowing four earned runs in Toronto’s 11-7 loss to the Houston Astros. Kikcuhi signed with the Blue Jays on March 14 after spring training had already begun and has been working closely with Walker to make changes to his delivery.

“I trust Pete a lot and we’ve had some very good, deep conversations, whether it was pitching mechanics, even non-baseball related-conversations,” said Kikuchi through translator Kevin Ando. “I think working with Pete, in continuing to work with him, I think will bring a lot of success.”

Kikuchi (0-1) allowed four hits and three walks in the loss to the Astros.

Heading into Friday’s game he had already given up 11 hits, 10 walks, and eight runs — five earned —over 12 innings in three starts against the New York Yankees, Boston, and Houston. All three of those games were losses for Toronto, even if it didn’t go against Kikuchi’s record.

Blue Jays manager Charlie Montoyo said that it all comes down to Kikuchi locating his pitches better.

“He has 13 walks in 14 innings, something like that,” said Montoyo. “He’s got the stuff, we all know that. he’s just not commanding his pitches.”

Jeremy Peña’s three-run bomb and Yordan Alvarez’s two-run shot broke the game open for Houston (11-9) in the sixth inning. Alex Bregman had a solo home run in the first.

José Urquidy (2-1) allowed four runs on seven hits and a walk for the Astros but also struck out six in five innings. Bryan Abreu, Phil Maton, Ryne Stanek and Héctor Neris came out of the bullpen for the Astros.

Vladimir Guerrero Jr. led the Blue Jays (13-8) with a three-run homer and Matt Chapman’s two-run shot kept the home side in the game.

Kikuchi was chased from the mound in the third inning.

The game was tied 1-1 when Alvarez’s RBI single cashed in Peña and advanced Bregman to third. Yuli Gurriel followed that with a double that scored Bregman and in the next at-bat Kyle Tucker’s sacrifice fly allowed Alvarez to cross home for a 4-1 Houston lead.

Kikuchi said that he and Walker are working on his slider.

“(We’ve) talked about increasing the velocity on that slider. Just getting a better feel for that, working at it each and every day,” said Kikuchi. “Just put me in a better position by gaining more fuel on that pitch.”

Guerrero tied it up again in the bottom of the third, launching a Urquidy pitch to deep left field, bringing in Tyler Heineman and George Springer. It was Guerrero’s sixth home run of the season.

A sac fly from Chas McCormick scored Martin Maldonado in the fourth to make it 5-4 Houston.

Peña piled on in the sixth inning, with a rainbow shot to deep left field, driving in Maldonado and McCormick. Bregman drew a walk in the next at-bat, setting up Alvarez’s two-run shot and giving Houston a six-run advantage.

Toronto had three consecutive singles in the bottom of the inning, with Heineman’s hit scoring Tapia.

A towering two-run shot by Chapman in the seventh bounced off the stadium’s third deck and cut Houston’s lead to 10-7. The impressive feat brought the crowd back to life with chants of “Let’s go Blue Jays!” echoing through the ballpark as Chapman rounded the bases.

“We thought we had a chance to come back until the end,” said Montoyo.

Tucker had an RBI double in the eighth to make it 11-7.

CAPRA DIEM — Infielder Vinny Capra had his contract selected by the Blue Jays from triple-A Buffalo a few hours before Friday’s game. Right-handed pitcher Bowden Francis was optioned to Buffalo to make room on the active roster.

BRANTLEY OUT — Left-fielder Michael Brantley was a late scratch from Houston’s lineup on Friday. He was placed in health and safety protocols, although the team didn’t indicate if he had tested positive for COVID-19, had symptoms, or had a close contact with an active case.

LOOKING AHEAD — José Berríos (1-0) is Toronto’s scheduled starter for Saturday afternoon’s tilt against Houston. Luis Garcia will take the mound for Houston in the 3:07 p.m. start.