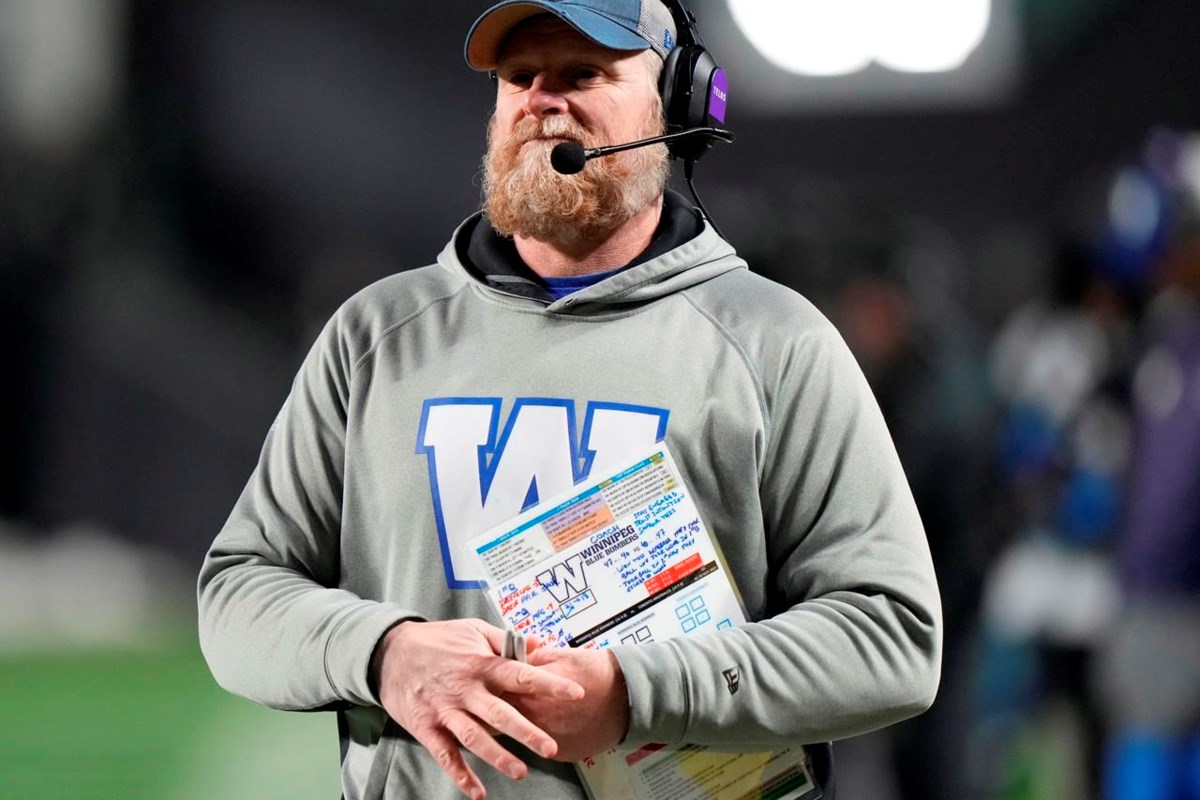 WINNIPEG — Mike O’Shea doesn’t have a pen in hand poised to sign a new contract as head coach of the Winnipeg Blue Bombers.

That doesn’t mean, though, that a deal isn’t in the works.

At a press conference Thursday to wrap up the team’s 2022 CFL season, O’Shea said he’s had a couple of conversations with president and chief executive officer Wade Miller.

“But you have to understand we’re still only a few days removed from the Grey Cup loss,” O’Shea said. “The process we’re in right now is still exit interviews (with players).”

O’Shea’s three-year contract with the club expires at the end of the year. He was first hired in early December 2013 and has moulded a winning culture.

Players have referred to him as the key piece to the team’s success, including consecutive Grey Cup championships in 2019 and 2021.

The Bombers posted a franchise-best 15 wins this season (15-3), but lost 24-23 to the underdog Toronto Argonauts in last Sunday’s title match.

He was asked how much he wants to be back with the team.

“Yeah… we’ve had a lot of success here and we’ve got a lot of guys back,” O’Shea said. “The group of guys we’ve assembled here is just so easy to be around.

“Once again, right now the only focus I have is trying to get with these guys and have the conversations that need to be had with the players and make sure that they can get on their way home to their families.”

He was asked why he wouldn’t just come out and say he wants to be back, so as not to fuel speculation.

“You can speculate all you want. Absolutely. Do whatever you want,” he said with a laugh.

The Bombers have 25 pending free agents after announcing Thursday that offensive lineman Pat Neufeld has agreed to a one-year contract.

Neufeld, who turns 34 next month, has been with the Bombers for eight of his 11 CFL seasons. The Regina native was a CFL all-star the past two seasons

Before Neufeld’s contract was announced, O’Shea was asked if his status might influence general manager Kyle Walters’ ability to sign players.

“I don’t think it’s going to stop a player from signing. Nope,” he said.

The 52-year-old native of North Bay, Ont., who was named coach of the year for the second straight season last week, said he’s not aware of other teams asking permission from the Bombers to speak to him. The Ottawa Redblacks and Montreal Alouettes have openings for a head coach.

Some head coaches aspire to add on general manager duties, but O’Shea said that hasn’t interested him. Walters has been the Bombers’ GM since Nov. 26, 2013, about a week before O’Shea was hired.

“I have never, and I think this is what is easy for me,” O’Shea said. “I’ve never been in a position and been thinking about another position.

“You’ve heard me say it 100 times if I’ve said it once: as a player I never thought about being a coach. I never critiqued coaches; I never did anything like that. I was, ‘You’re the coach. You tell me what to do. I do it.’

“It’s pretty easy for me. I have my role and I solely focus on my role.”

But it’s not something he would dismiss if the opportunity were presented.

“I don’t even give it any thought,” O’Shea said. “I think I could be whatever I want to be in a lot of different professions outside of football.”

He couldn’t put a timeline on the process of deciding his future because he said it takes time to have exit meetings with players, who are still absorbing the Grey Cup loss.

He expects that sting will last a long time for him, too.