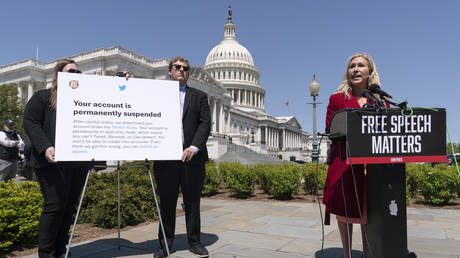 Twitter boss Elon Musk has vowed to extend a “general amnesty” to an unspecified number of suspended users, a week after reversing former US President Donald Trump’s lifetime ban from the platform. “The people have spoken. Amnesty begins next week,” Musk tweeted on Thanksgiving Day. He added “Vox Populi, Vox Dei,” a Latin phrase that means “the voice of the people is the voice of God.”The SpaceX and Tesla CEO launched a Twitter poll on Wednesday, asking if Twitter should “offer a general amnesty to suspended accounts, provided that they have not broken the law or engaged in egregious spam?” Out of more than 3.1 million users who took part, 72.4% voted ‘yes’ and  27.6% voted ‘no’.In a separate message Musk also promised to start freeing and offering up for grabs “vast numbers of handles” that had previously been “consumed” by bots and trolls.The people have spoken.Amnesty begins next week.Vox Populi, Vox Dei.— Elon Musk (@elonmusk) November 24, 2022Since acquiring Twitter for $44 billion last month, Musk has faced growing criticism for laying off hundreds of employees and reversing the permanent suspensions of multiple notable accounts, including former US President Donald Trump following a similar public vote. While critics claimed that Musk’s actions fuel hate speech, harassment and misinformation, he has rejected accusations he was some kind of “right-wing bogeyman” and insisted that Twitter under his ownership has not banned any leftists, not even for “utter lies.”

It remains to be seen how many users would be eligible for amnesty. This week the platform already reinstated Rep. Marjorie Taylor Greene, whose personal Twitter account had been permanently banned since early January 2022 for posting “misinformation” about the Covid-19 pandemic. Musk, however, drew the line at Alex Jones, saying he had “no mercy” for someone who used children’s deaths for clout.Musk had vowed to transform the platform and turn it into a bastion of free speech, saying it was “important to the future of civilization” to have a digital town square where a wide range of beliefs could be discussed.
You can share this story on social media:
Follow RT on