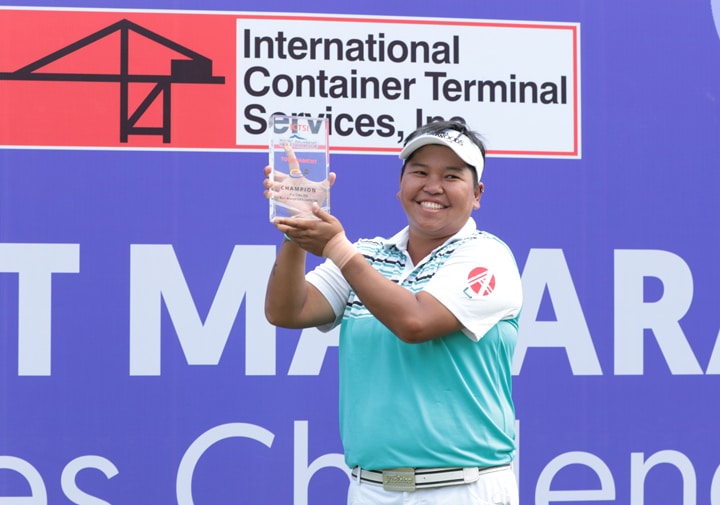 Not even a backside slide could thwart Ikeda’s drive for a first Ladies Philippine Golf Tour (LPGT) championship in three years as she built enough cushion—eight—with her explosive 33 at the turn and Avaricio ran out of holes in her frantic bid to turn things around at the back after a horrible 38.

Avaricio, winner of the last two LPGT events at Hallow Ridge and Caliraya, cut the deficit to half with a birdie on No. 13 coupled with Ikeda’s double bogey on the 10th and a bogey on the 13th as play resumed after a 30-minute delay due to threat of lightning.

She pounced on another Ikeda miscue on No. 14 at resumption to pull within three but the latter birdied the 15th and went up by four again. They matched pars in the next two holes then Avaricio birdied the last to match Ikeda’s closing even-par card as the latter clinched the victory on a 215 total in a triumph that more than made up for her one-stroke setback to Avaricio at Caliraya last month.

“It’s nice and I’m happy to win again. It’s been a long wait but the wrist injury has hampered my campaign after winning at Midlands in 2019 although I felt better in the last few tournaments,” said Ikeda after annexing the victory worth P116,250 that came after amateur Rianne Malixi upstaged Princess Superal in a shootout and won by one at Luisita, and Avaricio edged Superal in sudden death at Hallow Ridge.

Ikeda did contend in a number of tournaments in the succeeding LPGT events but never really had the chance to get a clear shot at another title, either stumbling with poor starts or fading with shaky finishes.

Avaricio wound up with a 218, her bid for a rare three-peat hampered by a wobbly frontside 38, while first round leader Harmie Constantino also birdied the last to save a 73 for third at 221 in this fourth leg of the circuit organized by Pilipinas Golf Tournaments Inc. and put up by ICTSI.

“I wasn’t rattled even if I had a shaky start at the back since it was my fault. I didn’t feel any pressure at all,” said Ikeda, whose campaign is backed by Manila Southwoods and Global Technologies, referring to her double-bogey mishap on the 10th and miscues on Nos. 13 and 14.

Those came after the former SEA Games gold medalist bounced back strong from a bogey on No. 1 with a birdie-par-eagle-birdie roll from No. 5 to virtually put the outcome beyond recall.

Sunshine Baraquiel exploded at the finish, birdying the last three holes to cap a fiery four-birdie windup from No. 13 for a tournament-best 68 as the Midlands leg winner last year jumped from 10th to salvage a share of fourth at 222 with Gretchen Villacencio, who carded a 74, and Mariano, who faded with a 77 after pulling to within two off Ikeda after 36 holes and moving to with one after No. 1.

Martina Miñoza and Lesley Icoy likewise earned their LPGT cards in contrasting fashions with the former pooling a 224 after a 72 for seventh and the latter needing to birdie the last hole to salvage an 81 for 12th place at 237.

The niece of legend Frankie Miñoza also claimed the low amateur honors, nipping Arnie Taguines, who assembled a 225 after a 73.