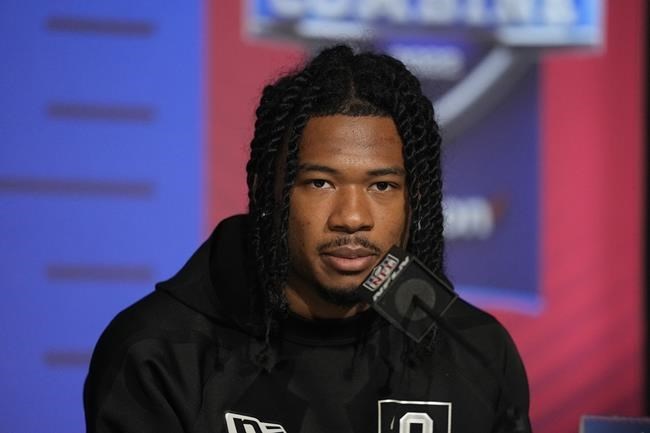 The Houston Texans won’t have to wait long for Canadian John Metchie III.

Houston traded up with the Cleveland Browns to select the Alabama star receiver in the second round, No. 44 overall, of the 2022 NFL draft Friday night. The Texans made the move despite Metchie suffering a season-ending knee injury in the Tide’s 41-24 SEC title win over Georgia on Dec. 4.

“As far as my recovery, I will be good to play football in July,” Metchie told reporters during a videoconference. “I’ll be good to go, no training wheels.

“I’ve been running already for the last couple of months, cutting, jumping, all of those type of things. When I say I’ll be ready in July, it’s full-go football.”

Houston GM Nick Caserio jumped ahead of Baltimore for the chance to take Metchie. And with good reason as longtime Ravens executive Ozzie Newsome Jr. is a former star Tide tight end.

“If there’s one thing the Ravens love, it’s Alabama players,” said NFL Network insider Ian Rapoport. “This is why the Texans jumped them.”

Metchie was the first and only Canadian selected. He was the third receiver taken in the second round and ninth to that point in the draft after six were drafted in the opening round Thursday night.

The receiver from Brampton, Ont., had been mentioned as a potential first-round pick before suffering his knee injury. Daniel Jeremiah, the NFL Network’s draft guru, rated Metchie as his No. 73 draft prospect and had projected the former Crimson Tide star as a third-round selection.

Veteran Tyrod Taylor and rookie Davis Mills shared Houston’s quarterback duties last year before Mills was named the full-time starter late in the season. Mills was just 2-9 in 11 starts but the wins came over the Texans’ final five regular-season contests as he finished 263-of-294 passing (66.8 per cent) for 2,664 yards with 16 touchdowns and 10 interceptions.

Metchie doesn’t see any issues fitting into Houston’s offence and being able to produce down-field opportunities.

“I think I have a lot of versatility in my game,” he said. “However they need me is what I’ll do.

“I’m excited to go to work and help build the Houston Texans and make them better and bring what I can to the table.”

The Texans made two first-round picks Thursday, taking LSU defensive back Derek Stingley Jr. with the third selection and Texas A&M offensive lineman Kenyon Green at No. 15. On Friday, Houston picked up Baylor defensive back Jalen Pitre with the fifth pick of the second round before announcing Metchie’s name with the 12th choice.

Eight picks later, Canadian Chase Claypool came on to announce Georgia receiver George Pickens as Pittsburgh’s second-round pick. Claypool, a native of Abbotsford, B.C., was a 2020 second-round selection of the Steelers out of Notre Dame.

Metchie won’t be the lone Canadian on the Texans’ roster. Tight end Antony Auclair, a six-foot-six, 256-pound native of Notre-Dame-des-Pins, Que., is entering his second campaign in Houston after spending the first four NFL years with the Tampa Bay Buccaneers, securing a Super Bowl ring in the 2020 season.

The five-foot-11, 186-pound Metchie had a team-high 96 catches last season for 1,142 yards and eight touchdowns before his injury. The 2021 All-SEC second-team selection opted to skip his senior campaign at Alabama and declare for the 2022 NFL draft.

“By the way, Metchie should be ready from that ACL surgery by training camp,” Rapoport said.

Added NFL Network analyst Charles Davis: “When they (Texans) decide to run the football, John Metchie, when healthy, is going to help them big-time on the perimeter with his blocking.”

Metchie had 155 receptions for 2,081 yards and 14 touchdowns in 39 games at Alabama and helped the Tide capture an NCAA title in 2020. Earlier this month, Metchie was named the top prospect for the ’22 CFL draft Tuesday but now will be a futures selection by any Canadian franchise selecting him.

Metchie’s path to the NFL has certainly been a long and twisting one.

He was born in Taiwan, moved to Ghana at a young age and grew up in Brampton. He then moved to Hagerstown, Md., to attend St. James prep school and spent a post-graduate year at the Peddie School in Hightstown, N.J., before committing to the University of Alabama.

Metchie comes by his football prowess honestly. His older brother, Royce, is a defensive back with the CFL’s Toronto Argonauts while his other two brothers, both older, also played collegiately in Canada.

The expectation is Metchie will be a slot receiver with the Texans. And although he might not have the sheer speed of other wide receivers in the draft, Metchie developed into a very strong route-runner at Alabama while proving to be a tough competitor who’s more than capable of creating separation.

“I like that he (Metchie) has a big catch radius,” said NFL Network’s David Carr, a former quarterback who was taken first overall by Houston in 2002. “For Davis, he’s going to be able to give him a guy that’s very friendly as far as throwing the football to him.

“This is a nice, solid pick for Lovie Smith and his crew . . . he can do a lot of things. He had the ACL in the championship game, which we all kind of remember, but I think that he’ll come back from that and be fine but I think that’s probably why he fell a little bit. He’s a fantastic football player, he’s going to be able to help them a lot.”